Belmont Street is taking on a whole new look with the creation of a parklet and a “lawn” area equipped with games and seating.
Jun 30, 2016 3:46 PM By: Theresa Mcmanus 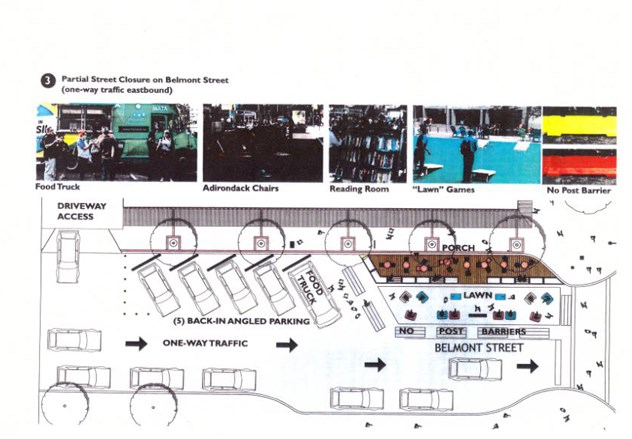 The city has turned a conceptual drawing of changes on Belmont Street into reality. Stay tuned of pictures of the new community gathering place in Uptown New West.Contributed

Belmont Street is taking on a whole new look with the creation of a parklet and a “lawn” area equipped with games and seating.

City council recently endorsed a plan in the uptown that includes permanent crosswalk enhancements at Sixth and Belmont streets and construction of a temporary parklet adjacent to the Tim Horton’s where people can sit, socialize and enjoy the city. The parklet includes movable tables and chairs, fixed seating and planters to buffer the space from vehicular traffic on Belmont Street.

But that’s just the beginning.

The plan for “public realm improvements” also includes transforming the side of Belmont Street next to the parklet into a social “lawn” that includes artificial grass, outdoor games and colourful Adirondack chairs. That side of the road will also have five back-in angled parking stalls, and Belmont Street would be restricted to one-way traffic.

Before the parklet was even completed, it was filled with people who were enjoying an outdoor space where they could sit and soak up the uptown ambiance.

While the city believes the plan will transform the streetscape around Sixth and Belmont into an area the public can enjoy, some area residents fear it will exacerbate nuisance crimes in the neighbourhood.

Uptown resident Gordon Grant is pleased the parklet and “lawn” can be removed if necessary. He likes the idea of parklets, but worries about creating them in an area where nuisance behaviours are already causing problems for neighbours.

“This particular area is not a good place,” he said. “I hope I am totally wrong. I hope it works. I just don’t see it.”

The Viceroy’s strata has met with city officials in the past to discuss concerns about drug dealing, drunks and people sleeping in doorways in the neighbourhood. The strata only learned of the city’s plan for Belmont Street a week before the parklet was built.

“They should have consulted with all the neighbouring businesses and residents along Belmont Street before proceeding with this,” said Grant, who voiced his strata’s concerns in an email to the mayor. “They seem to have had their own agenda.”

In an email to Grant, Mayor Jonathan Cote said the initiatives on Belmont Street are consistent with the Great Streets program aimed at making commercial districts more welcoming places.

“I fundamentally believe that you are not going to solve your concerns by making the area an unfriendly place to be, where people do not want to gather and there are no comfortable or interesting places to sit or be,” he wrote. “I believe it is that kind of mentality and approach that leads to streets that fall into decline. Communities need to embrace their public spaces, not hide away from them.”

Cote said the success of this project will come down to how the space is designed and programmed.
“Success for me is to create a public space where people of all socio-economic demographic feel welcome and comfortable in this space,” he said. “I am passionate about our Great Streets program and see a huge opportunity to create a heart and community gathering place for uptown.”

409
New NWSS has cost $88.5 million so far. Next step: demolition
256
New Westminster school district eyes 'seamless' child-care plan
223
UPDATE: Here's where you could be able to buy cannabis in New West
179
New Westminster police board stands by its proposed 2021 budget
174
Opinion: Now NIMBYs are whining about shadows from new housing