The Brow of the Hill neighbourhood is woefully lacking in trees and greenspaces, but residents are hoping that will change – and soon.
Feb 14, 2018 4:42 PM By: Theresa Mcmanus 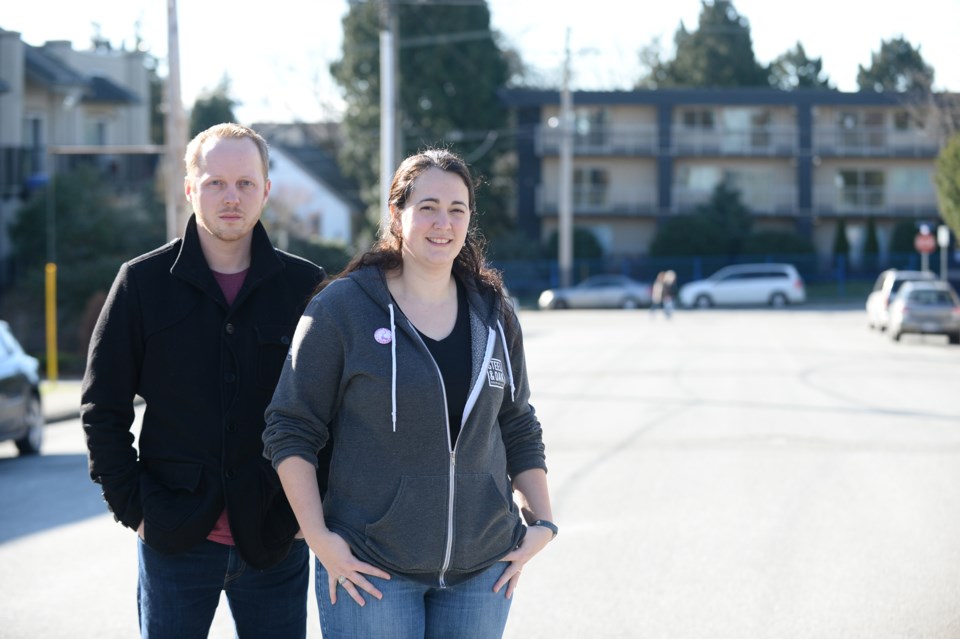 February: Rick Vugteveen and Alice Cavanagh appeared on behalf of the Brow of the Hill Residents’ Association at a city council meeting, where they appealed to the city to plant more trees and create more greenspaces in the neighbourhood.Jennifer Gauthier

The Brow of the Hill neighbourhood is woefully lacking in trees and greenspaces, but residents are hoping that will change – and soon.

The Brow of the Hill Residents’ Association is appealing to the city to introduce some short-term and long-term initiatives aimed at improving the livability of the neighbourhood by planting more trees and creating more parks. While the neighbourhood continues to densify and accommodate more residents, the group is concerned that little greenspace has been created in Brow of the Hill for decades.

“Right now in Brow of the Hill, we have a situation where, for 20 years now there’s been a city policy calling for added green space, city policies for additional trees, city policies have called for quite a few amenities in that neighbourhood,” said area resident Alice Cavanagh. “None of them have come forward, so we wanted to review what the current situation in the Brow of the Hill is and offer some suggestions.”

The residents’ association is calling on the City of New Westminster to initiate “pocket park” planning in 2018, with the goal of creating spaces in the short-term that don’t require land acquisition. It also wants the city to put the acquisition of multiple neighbourhood-serving parks into its next five-year capital budget cycle.

“Sinclair Park, which is in Glenbrook North, is a fantastic example of this type of park,” Cavanagh said. “I’ve actually taken my daughter and played in that park. It’s great. It’s got benches, it’s got a small play structure, it’s got a picnic table. It’s got enough space to run around with a soccer ball. It takes up two house lots.”

Cavanagh said a map of New Westminster shows the city has some decent coverage of trees, but there are hardly any street trees in Brow of the Hill.

“There are entire blocks where there is not a single tree on the street,” she said. “It’s a problem in our neighbourhood because we don’t have a lot of single family homes, which means there isn’t green space making up for the lack of street trees.”

The Brow of the Hill Residents’ Association is asking the city to plant 1,000 trees in the next 10 years, beginning with 100 tree plantings this spring.

Resident Rick Vugteveen said 17 to 18 per cent of New Westminster’s population lives in Brow of the Hill, so that figure lines up with the city’s goal of planting 10,000 trees in 10 years as part of its urban forest management strategy.

“We can see very clearly the Brow of the Hill is a very large, very dense area with some very major pockets where there are no trees, there is no easy access to parks. And this is impacting a very substantial number of people because it is one of the densest areas of the city,” he said. “When you think about having a data-driven approach to prioritizing investments, to us anyway that seems like a very clear signal for investment.”

While the residents’ associations recognizes a large park isn’t in the cards for the neighbourhood because of the high costs of land, it believes there are ways to get creative and create other green spaces in the neighbourhood. They cited Blackford Street, Seventh Street and Queens Avenue as potential locations for creating pocket parks and village greens.

Coun. Patrick Johnstone believes there may be opportunities to re-green some paved areas in the Brow of the Hill, as there are some areas with wide streets and little traffic.

“There are opportunities for us in those areas to figure out ways to green those spaces. It acts as traffic calming, it makes the community more conformable. It gives all the benefits of green space,” he said. “It is not like these are heavily trafficked roads.”

Council referred the issue to staff.

Dean Gibson, the city’s director of parks and recreation, said staff will be reporting back to council with an update to the tree program that will include a schedule for planting trees in the city. While it’s “a formidable challenge” to acquire land for parks, he said the city has considered the notion of repurposing existing spaces, such as road ends and rights-of-way, into green spaces.

“While I can’t say today the specific plans for this neighbourhood have been mapped out, I think there is lots of promise,” he said.