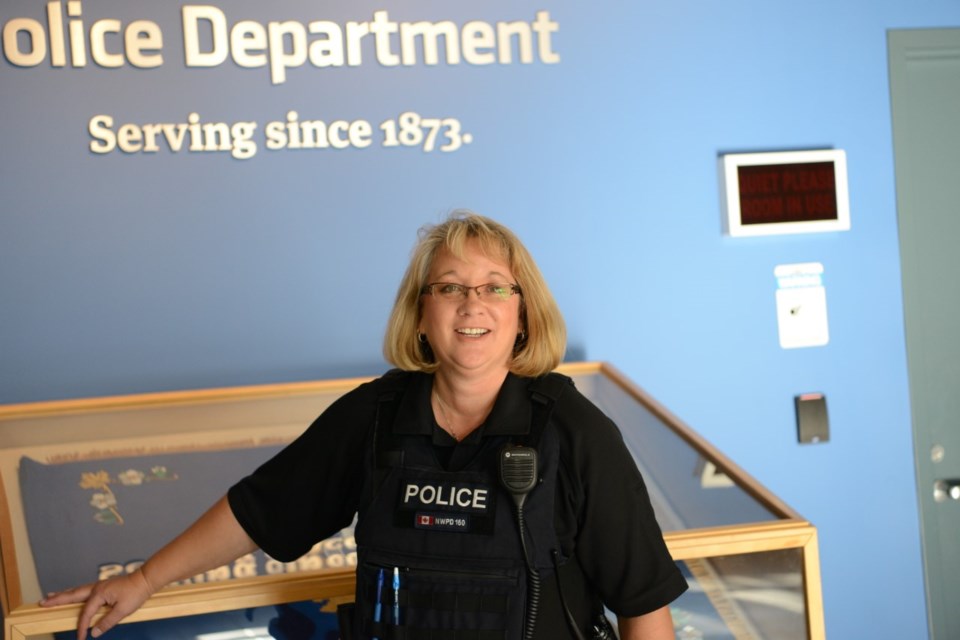 Const. Camille Oliveira used her own family's experience with Alzheimer's to develop the Silver Branch program for the New Westminster Police Department.Contributed

A New Westminster police officer is using her own family’s dementia journey to help others.

Const. Camille Oliveira, the NWPD’s vulnerable person’s liaison officer, spearheaded the Silver Branch project in October 2020. It grew out of her own personal situation of having a family member with dementia.

“This project is our family’s journey on how we worked with a local police agency to do good safety planning with this immediate family member who was engaged in wandering behavior in the community,” she explained. “Working with myself and my husband, who is also a police officer, I decided that the ability to do this shouldn’t just be relegated to our family; it should be available to all families.”

Oliveira, a 23-year veteran of the NWPD, took part in the Minerva program, a leadership training program for women offered by the City of New Westminster. The Silver Branch was the topic of her Capstone project with the program.

“When I started with Minerva, I didn’t know where it was going to end for me and where it was going to begin,” she said. “But this project landed at my front door due to personal circumstances, where I had an immediate family member who, at the beginning of COVID, went through a period of very rapid decline and was subsequently diagnosed with dementia.”

Silver Branch is a community outreach and prevention program for at-risk older adults with cognitive impairment and dementia issues. Working with police, families can create a customized safety plan, learn about helpful tools such as GPS smart technologies and door alarms and connect to additional resources in the community.

The first goal of the Silver Branch program, accomplished with the help of Fraser Health, was to create a toolbox for members of the New Westminster Police Department to help them better understand what dementia is and what it looks like. The idea was to provide officers with the tools needed to help them identify when they may be dealing with a senior who has cognitive impairment issues.

“When an officer either has a file – it could be something as simple as a check for welfare or even a traffic stop, or where they come across a senior they think may have some confusion or some cognitive impairment –  they send the file to me to do some follow-up with them or their families,” Oliveira explained. “I sit down and I share my story that has happened with my family. It’s that common bond where we can talk about, ‘Yeah, maybe it’s time to do some safety planning.’”

Right from the start, seniors are encouraged to go to their family doctor and put a good care plan into place.

“They need to talk with their family practitioner and make sure they get a proper diagnosis,” Oliveira said. “Some of the decline could be as simple as a medical issue like a bladder infection or a urinary tract infection that can cause a very abrupt change in behavior, or something as simple as high blood pressure that’s undiagnosed. You never know. And it may be symptomatic of something more serious.”

As of November 2020, Oliveira had completed training for all units of the police department, including patrol members, the major crimes unit and the victim assistance unit. She plans to do more training in the fall, as the NWPD has hired new officers since the first round of training took place.

According to Oliveira, the New Westminster Police Department regularly responds to missing person calls related to the estimated 15,000 seniors living in the city.

“In 2018 we had approximately 160 files of older adult missings. In 2019, we had 180,” she told the Record. “It doesn’t seem like a lot but when you put it in perspective, there are 365 days a year, so that’s every other day our agency is dealing with an older adult that has been reported missing.”

The second goal of Silver Branch is to engage in timely and consistent safety planning for older adults who are living with cognitive impairment and dementia. Since November, NWPD patrol officers have made referrals for 52 families to the Silver Branch program.

“We have had some really good results,” Oliveira said.

Those referrals have led in a variety of directions, including collaboration with Fraser Health to get folks on the waiting list for appropriate long-term placement, as their health had declined to the point where they could no longer live on their own. In other cases those referrals have identified seniors who were not thriving at home because of issues related to lack of food and personal care, so arrangements were made for assistance to help them thrive.

In the inaugural week of the Silver Branch program, Oliveira met with a local family who was concerned about an elderly family member who tended to wander.

“We did the safety plan right there with that family,” she recalled. “Later that evening, that same senior went for a walk again in the community. But because we had a photo on file and we documented where he had gone missing before, our members were able to find him right at the same bus stop with that photo right away – even before they (officers) got to the family residence.”

When meeting with families about the Silver Branch program, Oliveira gets information about the senior’s habits, such as where they shop and where they like to walk, and she takes their photo – all of which helps locate them quicker if they go missing. GPS technology has also been helpful in locating missing seniors.

“One of the best parts of this program that worked for me and my family was engaging with technology,” she noted. “This is 2020. We can find a $1,000 iPhone; we should be able to find our seniors.”

Mayor Jonathan Cote, chair of the New Westminster police board, commended Oliveira for developing a really meaningful program that supports local seniors and their families. When Cote was growing, his grandfather, who had Alzheimer’s, lived with his family.

“This was back in the 90s and there weren’t a lot of supports out there. I do know the stress it did cause our family,” he said. “My grandfather was in relatively good health except for the Alzheimer’s, which meant he could actually be incredibly mobile. There were many instances where he went missing and would actually travel very, very long distances, which was obviously a very frightening situation.”

Similarly, Oliveira said her family member is such a vigorous walker that he could make it across his city’s border to a neighbouring community by the time police would even get to his home in response to a missing person’s report.

“When I put the strategy together for our family, it was peace of mind,” she said. “The last thing I wanted was this family member to go wandering.”

Tragically, said Oliveira, there are cases where Lower Mainland seniors have gone missing and have been found dead – an outcome she hopes to change by quickly finding folks who go missing.

The program’s fourth goal is to engage with seniors in the community and let them know about Silver Branch.

Oliveira said the program is near and dear to her heart because she gets to engage with families who are experiencing the same struggles she’s gone through with her own family.

“It is the best part of my day. I get to go out to meet with families who have a very difficult time with their loved one,” she said. “We share stories, we share good safety plans and we are able to have better results for the families that we work with.”

For more information on the Silver Branch program, contact Const. Camille Oliveira at 604-525-5411 or coliveria@nwpolice.org.