Some New West moms fear for their children’s futures if immediate action isn’t taken to combat climate change.
Sep 18, 2019 11:40 AM By: Theresa Mcmanus 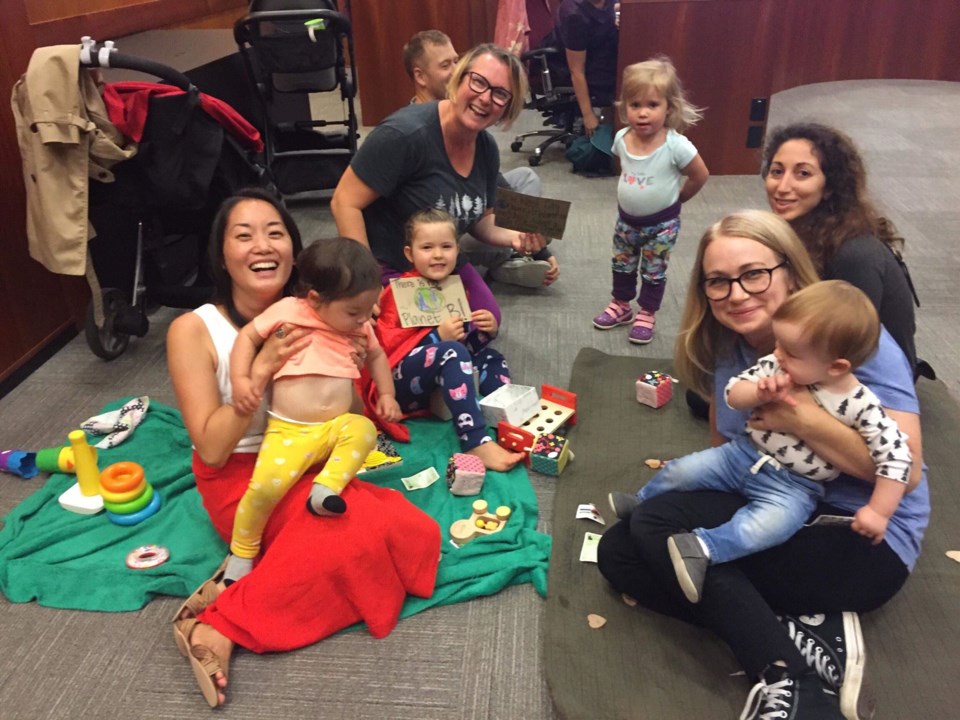 Members of Babies for Climate Action, shown here, a group of New West moms and their little ones, were in council chambers on Sept. 9, 2019 to speak about the city's plan to tackle climate change. Council has approved a motion to consider ways of making the city more welcoming and inclusive, including creating a dedicated space in council chambers for families with young children, including toys and areas for children to move aroundContributed

Several families belonging to Babies for Climate Action are appealing to city council to “be bold” with the city’s efforts to address the climate crisis. As their youngsters played and darted around council chambers, they noted it was a “tiny but loud reminder” of a small part of what’s at stake if climate change isn’t addressed immediately.

“When I was pregnant with this guy – his name is Malcolm; he’s almost a year – I thought, ‘oh, he will be able to achieve all the things that my generation couldn’t achieve in our lifetime,” said Jennifer Moreau. “Then I heard about the IPCC deadline to turn everything around in 12 years in terms of reducing greenhouse gas emissions, and I kind of panicked. I thought, he is not going to be old enough.”

In March, council passed a motion recognizing that climate change constitutes an emergency for the City of New Westminster. The motion said an October 2018 report from the Intergovernmental Panel on Climate Change (IPCC) determined it was necessary to limit global warming to 1.5 degrees Celsius, instead of two degrees as it was previously understood, and these changes must be done by 2030.

“The moms here in the room tonight and our kids are backing you 100 per cent if you rise to that challenge,” Moreau said. “This is the greatest threat humanity has faced.”

In addition to declaring a climate emergency in March, council also directed staff to report back on a number of items that can be implemented, including updates to city plans with new targets recommended by the IPCC and new actions that could be undertaken by the city to achieve its targets and to reduce greenhouse gas emissions.

A Sept. 9 staff report included several recommendations, including: creating a climate action division in the development services department to lead the city’s co-ordinated response to the climate emergency declaration; directing staff to implement climate actions in the report, including updating the corporate and community energy and emissions plan, so the city can achieve accelerated carbon-reduction targets; and directing staff to implement immediate actions that provide the deepest and most cost-effective carbon reductions for the city, in the 2020 to 2024 financial plan process.

Members of Force of Nature, who are also urging the city take bold action to address IPCC climate targets, held New Westminster Beach Party 2100 in front of city hall on Sept. 9 to draw attention to the fact that sea level rising projections suggest much of Queensborough and downtown New Westminster could be partially underwater by 2100.

“I am deeply concerned about climate change for myself, my family and my community. When I started to think about climate change 13 years ago with Al Gore’s An Inconvenient Truth, I thought it was something that may affect us in the future, maybe in my children’s later years. Everything is happening faster than we thought,” said New West resident Cheryl Lewis. “We are seeing the impacts now. New Westminster, like many communities, is going to be impacted by sea-level rise.”

Several speakers suggested every staff report to council should include a climate impact assessment, so every city action is viewed through a climate change lens. Delegates thanked council for its efforts to champion climate change, but several said they’d hoped the staff report would include more details about budgets and deadlines and a concrete plan for reaching targets.

Brendan Vance, a member of Force of Nature, said the city will need to start talking about the sacrifices that need to be made to address climate change. He said people won’t get to fight climate change and continue living exactly as they’re used to.

“The goal for us now in the present is to imagine a future in which our children are still alive,” he said.

Coun. Nadine Nakagawa said the presence of babies in council chambers makes the need to address climate change more real than anything else could. While the city deals with a number of priorities, she said climate change trumps any of the work being done by the city.

“I just can’t say strongly enough how the city needs to put this at the very top of the priority list. Because, by 2030, if we haven’t addressed this, anything else we do will not matter because we have condemned these children to a life on an unlivable planet,” she said. “I would really like to encourage the city to move faster on this. In my opinion, this is a plan to make a plan.”

While some folks may have found the report “a bit underwhelming," Mayor Jonathan Cote said it creates a structure that allows the city to start taking action. He said the really important juncture will be when council starts talking about budgets because allocating resources is where actions become reality.

“I am committed that if we are able to attach the resources in the upcoming budgets, we are going to start to see some exciting actions that we can all be proud about,” he said.

A staff report states the city has identified a number of key directions to address the climate emergency, including energy and emissions planning, green fleets, green buildings, emissions from other sources (such as industry), carbon pricing, urban forest management and sustainable purchasing.

Coun. Patrick Johnstone said the report outlines a framework of what the city can accomplish and how to get there, but it’s up to council to decide what funds and staff resources are provided to get the work done as soon as it needs to be done.

“The pathway is clear,” he said. “It is up to us to decide how fast we move forward.”

Johnstone said efforts to reduce emissions will require political will, so it’s important for council to hear from people who support the actions being taken by the city.

“Every time that we make a decision, we take a lane away – a driving lane away to put buses on it or god-forbid, bicycles on it – we are going to have people in those seats telling us this is the biggest indignity we have ever done to the city and this will cause the city chaos,” he told attendees at the meeting. “That is why it is important that people like you come to this council, and continue to come to this council.”