Metro Vancouver analysis shows the sewer is in “bad shape” and poses concerns about its structural integrity
Dec 15, 2020 3:28 PM By: Theresa McManus 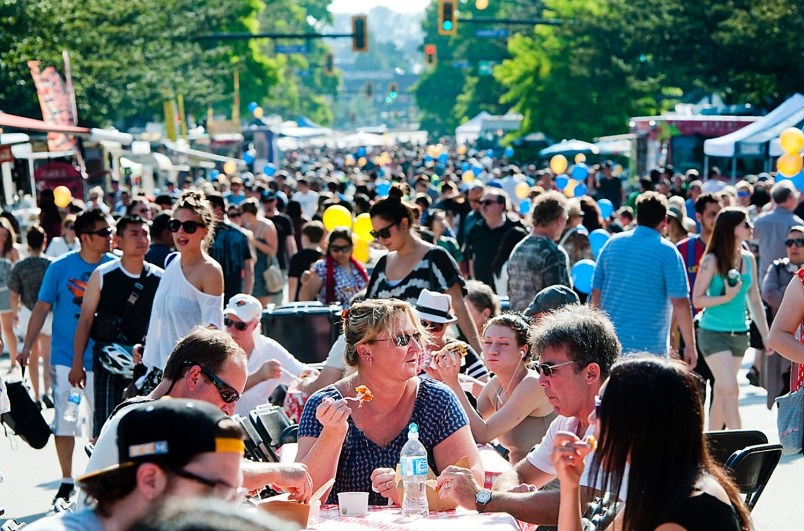 In summers prior to COVID-19, the Columbia StrEat Food Truck Festival drew massive crowds to the downtown. City council is concerned a proposed sewer project could be devastating to Columbia Street businesses. Record/File

New Westminster city council fears a proposed sewer main project could be a “death blow” to businesses on Columbia Street.

Metro Vancouver is proposing to rehabilitate approximately 1.6 kilometres of a major sewer line on a stretch of Columbia Street between McBride Boulevard and Front/Columbia streets. Metro Vancouver wants to begin construction in June 2021 during the “dry flow” season and resume work on the project in the summer of 2022 if it isn’t completed by the early fall of 2021.

“Sewer ratings go from (level) one, being very good, to five, being very bad. The entire length is a five,” said Colin Meldrum, director of engineering, design and construction in Metro Vancouver’s liquid waste services department. “There might have been some small areas that were a four. ...What that means is that we have concerns about its structural integrity.”

When the sewer is pressurized, Meldrum said liquid waste can force its way through the joints, which could cause a sinkhole in the road. He said Metro Vancouver crews have responded to a couple of structural failures locally in the past year.

“We could have another problem when it rains again next week or we may not have a problem for another year. That’s a question for somebody who can see the future,” he said. “I don’t know what is going to happen or when something bad will happen, but I know that if the sewer is not fixed at some point there will be a collapse, and whether that is next year or it’s in five years, we are unable to say. All we know is that it is in bad shape.”

Meldrum said the upgrades are needed to ensure the safe and reliable conveyance of sewage from New Westminster into the Annacis Island wastewater treatment plant.  Instead of replacing the sewer, he said Metro Vancouver plans to “slip-line” it by placing a new sewer in the existing sewer, which is much less intrusive construction and will be less disruptive to the community.

Yariv Ben-Shooshan, senior project manager, said the contractor would be requesting a variance to the city’s noise bylaw from May to November 2021 so crews could work outside of noise bylaw hours in order to complete the work on schedule. While no overnight construction is expected, he said there would be occasions when pumps and generators would be operating 24 hours a day, seven days a week.

Ben-Shooshan said a traffic management strategy is being developed in collaboration with the city, the Ministry of Transportation and Infrastructure and the Coast Mountain Bus Company. He said the overall philosophy is to minimize traffic impacts while maintaining safe access to pedestrians and bicycles along Columbia Street, including crosswalks and transit stops and accesses to businesses.

Council members expressed grave concerns about the proposed timing of the project, noting Columbia Street businesses and residents have had to endure fires, construction projects and impacts from COVID-19 in recent years.

“I don’t have a business in any of these areas and I am like screaming in my head,” said Coun. Mary Trentadue. “There is no way I can see myself supporting this work in 2021. We have businesses that are barely hanging on, emotionally and financially.”

Trentadue said the project is proposed to start at a time when businesses may just be getting back to “somewhat normal” after a year of dealing with COVID impacts.

“There is no way that I as a councillor am going to say, ‘Great, I’m glad you’re up and running, and now we are going to do some very serious construction in your area for the summer months when you might hope to be recouping what just happened to you in the last year,’” she said. “I have no issues with Metro Vancouver or the work that you do. But there’s no way I can support this at this time. I just won’t. I’m sorry; I will not do it to the local businesses in our community right now.”

Coun. Chuck Puchmayr said he was “shocked” at the proposed timeline for the project. Based on past projects in New Westminster, he said he doesn’t have a lot of confidence that Metro Vancouver would be able to complete the project on schedule.

“If the City of New Westminster does have a say in this, my say would be: not at this time,” he said. “We take the brunt of region’s traffic, and we seem to take brunt of the region’s sewage as well.”

Coun. Jaimie McEvoy noted that if the work isn’t completed in 2021 and resumes in the summer of 2022 that would mean Columbia Street would be in its third year of being unable to function normally.

“Frankly, if there were protesters down there about the project, I’d be joining them,” he said.

Coun. Chinu Das said she’d like more technical information about the urgency of the project.

“Like everybody else, I was a little bit stunned that this was coming forward at this time,” she said. “Our businesses have been hammered so much over the last few years with so many different reasons – fires, construction projects, COVID. I really think this is one blow too many.”

In a Dec. 14 report to council, city staff outlined concerns, including traffic impacts for pedestrians, cyclists, transit and vehicles in the downtown, impacts on local businesses that will still be in recovery mode from losses experienced during COVID-19 restrictions and potential conflicts with the Pattullo Bridge replacement project, which will require Front Street to be closed for weeks at a time during construction. Staff recommended council approve a motion requesting Metro Vancouver to coordinate the sewer work with the Pattullo Bridge replacement project, and develop a comprehensive community engagement strategy, a transportation management plan and an impact-mitigation plan prior to finalizing the project scope and schedule.

Council, however, opted to direct engineering staff to work with Metro Vancouver on different timeline options for this project.

“I think it would be prudent for council to direct staff to take this back and have further discussions with Metro staff prior to commencing with the public engagement exercise,” said Jim Lowrie, the city’s director of engineering. “We can certainly review the technical merits, the likelihood or risk of delay.”

Mayor Jonathan Cote said the city fully recognizes the importance of being able to get this infrastructure project done, but hopes city staff and Metro Vancouver can work together to address some of the  city’s concerns. On top of a number of things that have occurred in the last few years, he fears this project could be “death blow” to many businesses on Columbia Street.

“I also recognize there is never going to be a good time to do this type of work. It’s always going to have negative impacts, but as a region we have to be able to accommodate and allow this type of Infrastructure investment to happen,” he said. “Even though there is never a good time, there are some times that are really, really bad times.”

Meldrum explained that Metro Vancouver is pursuing this project at this time because significant levels of flow have been diverted away from the New Westminster interceptor.

“That is why we are able to get into there now,” he said. “Ideally we would have done this work five years ago but we didn’t want to do the work with all the flow in there because it would be extremely difficult. We’d have to put bypass pumping in; it would be a lot more expensive and a lot more disruptive to the community to do it then than to do it now.”