A 1908 house in the Queen’s Park neighbourhood has been spared a date with a wrecking ball. On Monday, New Westminster city council considered an application to remove heritage protection from a 111 year old house at 318 Fourth St.
Oct 29, 2019 5:11 PM By: Theresa Mcmanus 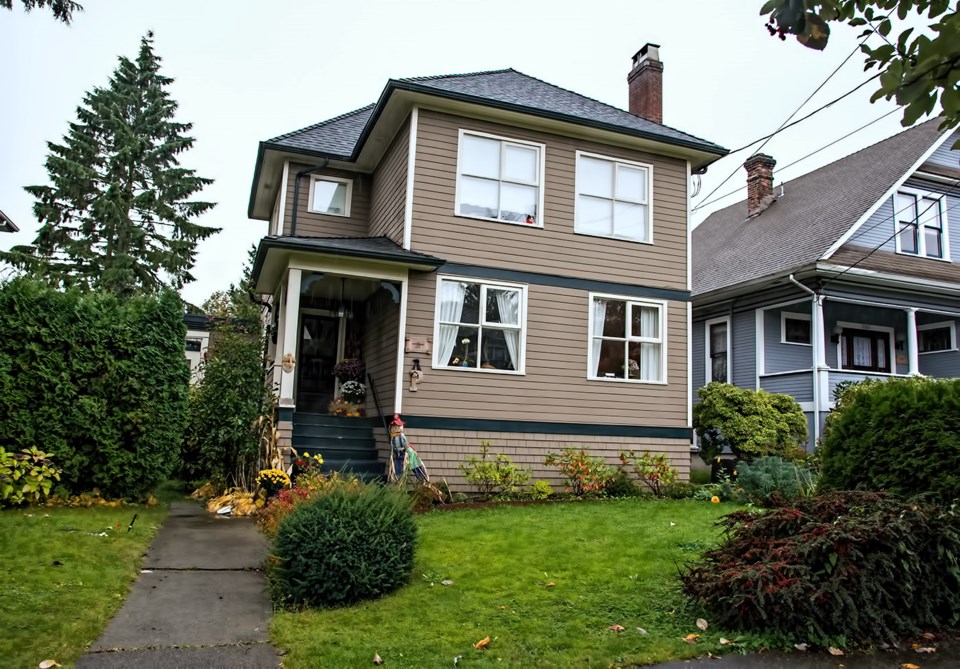 New Westminster city council has rejected a proposal that would see a 1908 house removed from the Queen's Park heritage conservation area.Chung Chow

A 1908 house in the Queen’s Park neighbourhood has been spared a date with a wrecking ball.

On Monday, New Westminster city council considered an application to remove heritage protection from a 111 year old house at 318 Fourth St., a move that requires an amendment to the official community plan. If the application was approved, the house would be reclassified as non-protected so it could then be modified or demolished without further heritage-related approvals.

“Homes are not like disposable razors – you don’t get rid of them just because it’s outdated or doesn’t suit your need anymore,” said Kathleen Langstroth, president of the Queen’s Park Residents’ Association. “We have to stop tearing down a heritage house to build a faux house.”

A dozen Queen’s Park residents spoke about the proposal at Monday’s public hearing, with only the applicant supporting the application. Many of the speakers were involved in the process that led to the creation of the Queen’s Park heritage conservation area (HCA) in June 2017.

While some properties are protected under the heritage conservation area, owners can apply to have houses removed from the HCA. When this property was evaluated for removal using a checklist developed by the city, it scored 60 per cent – and 61 per cent or above is when retention of the building is recommended.

“This is a very important precedent-setting decision that you face tonight,” Mari-Lou Nidel told council. “If you allow this well-kept, large home with lots of historic curb appeal to be removed from the advanced-protection category and demolition ensues, this will open the floodgates to others who purchase homes in the neighbourhood that do not have the character, size and charm of that home, and also want demolition.”

David Brett said the house is too much of a heritage asset to let it drift off into the landfill.

Queen’s Park residents stressed that the purpose of the conservation area is to retain old houses. Some expressed concern that the process even allows the city to consider removing a 1908 house, which is in the advanced protected category, out of the heritage conservation area.

“It is a well-built home, a family home that may be too small for the growing family that lives there now, but that is no reason to demolish a protected home,” Langstroth said. “Another family would love to call it their home. The present owners can do what most of us do when we can outgrow our homes. They can move to another home in the neighbourhood that they love because of the heritage and the streetscapes. We cannot demolish homes simply because it no longer meets our needs, not when we are looking at what needs to be saved – the heritage stock in the Queen’s Park neighbourhood.”

Nicholas Preovolos, who owns the house with his wife, said they may have been able to purchase the property for $850,000  in July 2013  but they don’t have a “blank cheque” to endure the financial risks of renovating the home down to its studs and retaining the façade. While he’s heard a lot of comments about how “beautiful and well-built” the house is, he offered a “reality check” regarding the house that is about 2,700 square feet and has a six-and-a-half foot high basement.

“We are not doing that. We are looking at the bylaw and we are working within it,” he said. “This council had the common sense and the foresight to realize that not every property can be saved. The Queen’s Park neighbourhood association believes that old is good for being old. Their fundamental dispute is not with me as an applicant, their fundamental dispute is with the bylaw because there is no old house that they would not oppose demolition or removal.”

As part of the creation of a heritage conservation area, Coun. Patrick Johnstone said the city created a scoring system to help guide council on whether a house deserves protection or not. He said the city also created an incentive program to give people alternatives to knocking down a house.

“I just don’t see that there was any effort here to invoke those incentive programs or that the actual usage on this house can’t be found in other ways,” he said.

Mayor Jonathan Cote said he’d be more supportive of the application if the house was in very poor condition or had scored “obviously low” on the evaluation.

When approving the Queen’s Park heritage conservation area, the city indicated it would review the policy after two years.

“Nothing is necessarily broken, but there is always the opportunity to revisit policy. Certainly, it’s timely because we are looking anyway in our plan to review, following the two years. Certainly changes can be made,” said Emilie Adin, the city’s director of development services. “No matter where you draw the line there will always be some situations that are on one side of the line and situations on the other side of the line, and people looking to move that line. We will be revisiting that policy.”