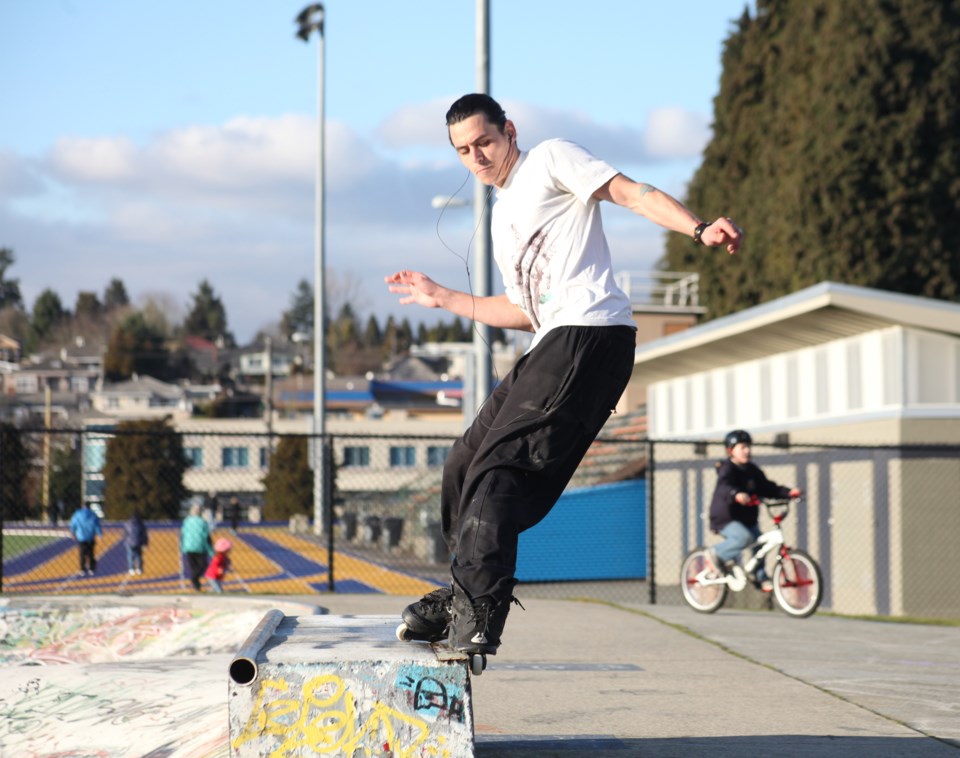 The city considers to fine-tune plans to replace the Mercer Stadium skate park. While the new facility will be built in Queen's Park, its specific location is still up in the air.

New Westminster is taking a look at a new site for a skate park in Queen’s Park.

On Monday, city council received a staff report recommending the former Arenex site as the location of the new skate park, which is replacing the skate park that was located at Mercer Stadium but had to be demolished to make way for the new high school. At Monday night’s council meeting, a number of community members and skateboarders supported the plan, but several Vagabond Players’ supporters expressed concern about the impacts the skate park would have on their productions if it’s located next to the Bernie Legge Theatre.

“I encourage you to value what you have created and don’t put it at risk,” Liam Coughlan said about the theatre. “The skate park is going to last for generations. Don’t be pennywise and pound foolish. Give the skate park users an uncompromised site and also allow Vagabond Players to flourish.”

New West resident Jeremy Heynen is opposed to locating the skate park next to the theatre as he’s not convinced the proposed noise-mitigation measures will adequately address the noise. He noted that more than 1,000 people had signed two petitions opposing the plan.

Vagabond Players, which is considered to be the longest-running community theatre group in B.C., has

performances at the Bernie Legge Theatre in October, December, February, April and June, as well as summer theatre in August. While matinees take place on weekends, its evening shows run from Wednesday or Thursday through Saturday.

Sapperton resident Wes Kinna doesn’t think the skate park and theatre uses are incompatible, nothing the skateboarders won’t be using that facility during the majority of the Vagabond productions. Having worked at an international skateboarding competition in Vancouver, he thinks some people’s fears about noise are based on a lack of understanding about how much noise is generated by skateboarding.

“So, though I respect their concerns I feel that the city, the parks board and staff have done a spectacular job of addressing the concerns, mitigating them,” he said.

A number of adult skateboarders who’ve been pursuing the sport for most of their lives expressed frustration about the lingering perception of some people that skateboarders are “bad people” or will lead to vandalism, graffiti, drug use and safety issues around the theatre.

“Skateboarding is a fun activity that keeps kids out of trouble and doesn’t deserve the negative light that’s being cast on it,” said New West resident Nat Green.

McEvoy said this reservoir site wasn’t deemed to be available for a skate park when the city first began looking at the issue, but it’s since been determined there’s enough space on the site to accommodate an interim facility for programs offered in the former Arenex and a skate park.

“It leaves everyone with what they want,” he said about the reservoir site. “The site I am proposing can provide the benefits of the Queen’s Park location that’s currently being proposed for the skate park, while also addressing concerns of theatre goers and others.”

“It is technically viable, I can’t think of a good reason not to do it,” he said. “My understanding from talking to staff is it could take a couple of months longer, which probably is an issue for some people, but I think overall if we were able to do this it would be beneficial to all concerned. I think it would build goodwill between skaters and theatre goers for the long term that would be healthy.”

Along with McEvoy, Coun. Bill Harper and Mayor Jonathan Cote supported the plan, but councillors Chuck Puchmayr and Patrick Johnstone opposed, preferring the staff recommendation to build the facility at the Arenex site and get to work immediately. (Councillors Mary Trentadue and Lorrie Williams were not at the meeting.)

“If we go that route, we are not going to see a skate park until next year,” Puchmayr said. “I am not in favour of that whatsoever.”

Johnstone said he feels “pretty poorly” that the city has already left a gap between the time the Mercer skate park was closed and a new facility will be built and doesn’t want any further delays. He supports the Arenex site as it’s in a prominent place where it can be seen by other park users.

“It is a mainstream sport and activity. It is going to be in the Olympics in 2020,” he said of skateboarding. “This is something we should be proudly displaying in a very public open space in the middle of the park. I think the location we have does that well.”

While Johnstone hears the concerns of the Bernie Legge Theatre supporters, he believes the mitigation techniques proposed by an acoustical consultant will address any noise impacts from the skate park – and the traffic noise from McBride Boulevard. The consultant recommended the addition of weather stripping to the theatre’s door, upgrades to interior doors and the construction of a two-metre high earth berm between the skate park and the theatre.

Dean Gibson, the city’s director of parks and recreation, said staff will get to work doing some analysis on the property right away.

“Because that is a former reservoir site that has been filled in, it is not fully understood what’s going on below ground,” he said. “We need to get a cursory understanding of what that means.”