Providing public access to New Westminster City Hall is challenging during a pandemic. In a June 1 report to council about the city’s draft COVID-19 recovery plan, staff indicated it could be October before city hall is able to reopen to the public.
Jun 1, 2020 5:13 PM By: Theresa Mcmanus 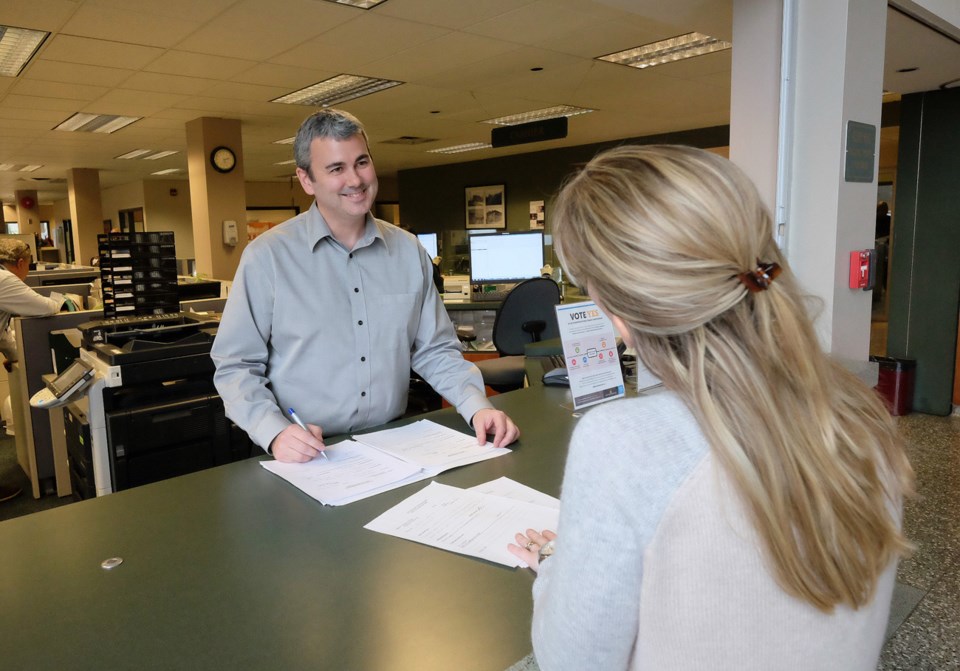 Open later: Brent Cassidy is one of the employees at city hall who will be working later hours as a result of new extended hours at city hall. The City of New Westminster aims to enhance customer service by offering extended city hall hours.Larry Wright

Providing public access to New Westminster City Hall is challenging during a pandemic.

In a June 1 report to council about the city’s draft COVID-19 recovery plan, staff indicated it could be October before city hall is able to reopen to the public. When city hall reopens, it’s expected that staff will be at the entry to manage building capacity, queuing will take place outdoors, signage will be posted outlining protocols for guests at city hall and barriers will be in place at all payment stations and other customer counters.

In response to the COVID-19 pandemic, New Westminster City Hall closed to the public in March. Some essential services are being offered at city hall on an appointment basis.

In New Westminster, property taxes are due by July 2.

While people can pay their property taxes online, Mayor Jonathan Cote said there are often lineups of people wanting to pay their taxes in person at city hall every June. He said he knows of a number of cities that have been working on accommodating people who are more comfortable paying their taxes in person and he’d like New West to try and offer that service.

Tobi May, acting manager of civic buildings and properties, said staff has been exploring how that could be done and still meet COVID-19 requirements.

City of New Westminster officials have reached out to municipalities that are allowing for in-person payment and found that those cities are able to provide separation between staff and the public and to provide one-way circulation in and out of the building – something that’s harder to do at New Westminster City Hall.

“We are working to introduce one-way circulation. With three-foot wide hallways, it is pretty difficult to achieve six-foot separation between people,” May said. “In addition to that, we have a single accessible access point for the building, and that’s the north entrance. All of the other entry points require stairs, so we would have people coming and going through the north entrance.”

According to May, the city may set up a kiosk outside the north entrance to city hall, so members of the public going to city hall are met by a friendly face, who can direct them to other opportunities for paying their taxes.

“Certainly, with the extended tax deadline, we will be reevaluating a position on this and our ability to perhaps provide augmented services for receiving tax payments,” she said.

Cote challenged staff to continue working to find a way for residents to pay their taxes in person.

“For some members of the public, if you always pay your taxes in person, that can be quite difficult and stressful. I don’t want to be adding that stress to folks during this (time),” he said. “So whatever can be done, whether it is a little kiosk outside or some way to be able to accept payment in a bit of a different way, I want to challenge staff to continue to work on that.”