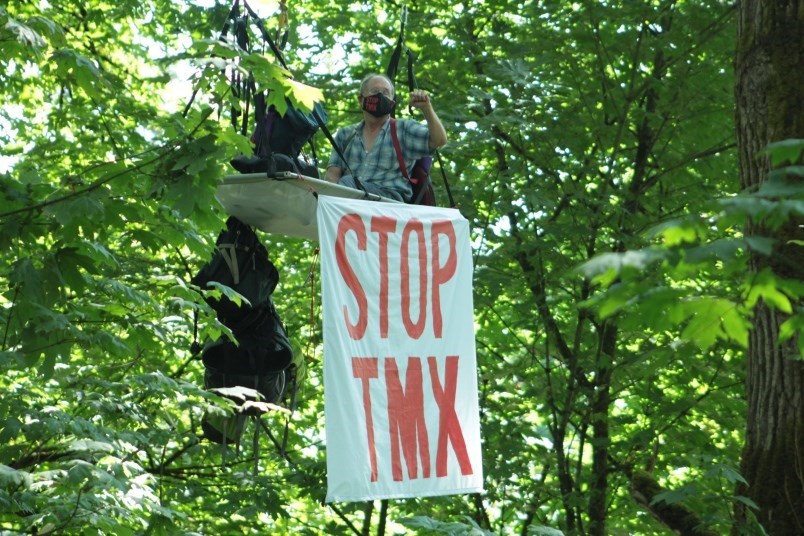 Dr. Tim Takaro took to a tree along the route of the Trans Mountain pipeline this summer to protest the project.File

Council issued a statement Dec. 18 regarding its opposition to the pipeline expansion project and its support for a recent court application by land defenders, who are hoping to stop the pipeline project. Council is concerned about its proximity to the sensitive riparian area of the Brunette River.

“As an intervener in the flawed National Energy Board process that led to the approval of the TMX project, the City of New Westminster has not been satisfied that TMX sufficiently addresses the imminent and long-term risks to the Brunette River, its unique habitat, and species at risk, including recently rejuvenated local populations of chum and coho salmon, and the endangered Nooksack Dace,” said the statement.

In early August, land and water protectors established an aerial camp high in the trees in Burnaby, just off of North Road and not far from Hume Park. They took the action in an effort to prevent Trans Mountain Corporation from cutting down trees along the pipeline route.

On Dec. 9, police cleared out the Holmes Creek Protection Camp and removed part of a protest structure that had been erected in the trees running alongside the creek in the summer. Two days later, pipeline opponents filed documents in B.C. Supreme Court aimed at halting the project.

In a video posted on Facebook, Dr. Tim Takaro, a public health physician, stated the process for approving the pipeline expansion project was “rigged” because the federal government refused to consider downstream climate impacts. The court filing, submitted on behalf of Takaro, is asking B.C. Supreme Court to halt construction due to unassessed climate damages.

“The approach differs from previous legal challenges to the TMX pipeline in that prior attempts to set aside the injunction have not raised the ‘downstream effects’ of actually burning the bitumen in the pipeline, which would add considerably more CO2 to the atmosphere than the ‘upstream’ process of extracting and transporting it,” Martin Peters, the lawyer representing the applicants, said in a news release. “The court will have to reconsider issues of irreparable harm and balancing the financial interests of Trans Mountain with the harm to the planet that follows from the use of this fuel.”

In a Dec. 18 statement, city council stated it stands in support of the land defenders who are currently acting to protect fragile riparian habitat near the Brunette River through peaceful protest and occupation of federally regulated lands, and asks that the injunction preventing this action be set aside.

“New Westminster council continues to be concerned that the TMX project is at odds with Canada’s regulated commitments under the Paris Agreement to reduce global greenhouse gas emissions and limit global warming to well below 2, preferably to 1.5 degrees Celsius,” said council’s statement.

City council’s statement was issued a day after Trans Mountain announced it was temporarily suspending construction on the project until Jan. 4 to address safety concerns. That decision came after a contractor was seriously injured at the Burnaby construction site.

New Westminster’s concerns about the project date back to 2015, when it was granted intervener status in the National Energy Board hearing about the proposed pipeline expansion. At the time, the city expressed "significant concerns" about the impact that the twinning of the Trans Mountain pipeline would have on the environment, as well as the ability of first responders to deal with incidents around the pipeline.