New Westminster’s waterfront is still open – but people need to follow social distancing guidelines if they want it to stay that way.
Apr 7, 2020 2:05 PM By: Theresa Mcmanus 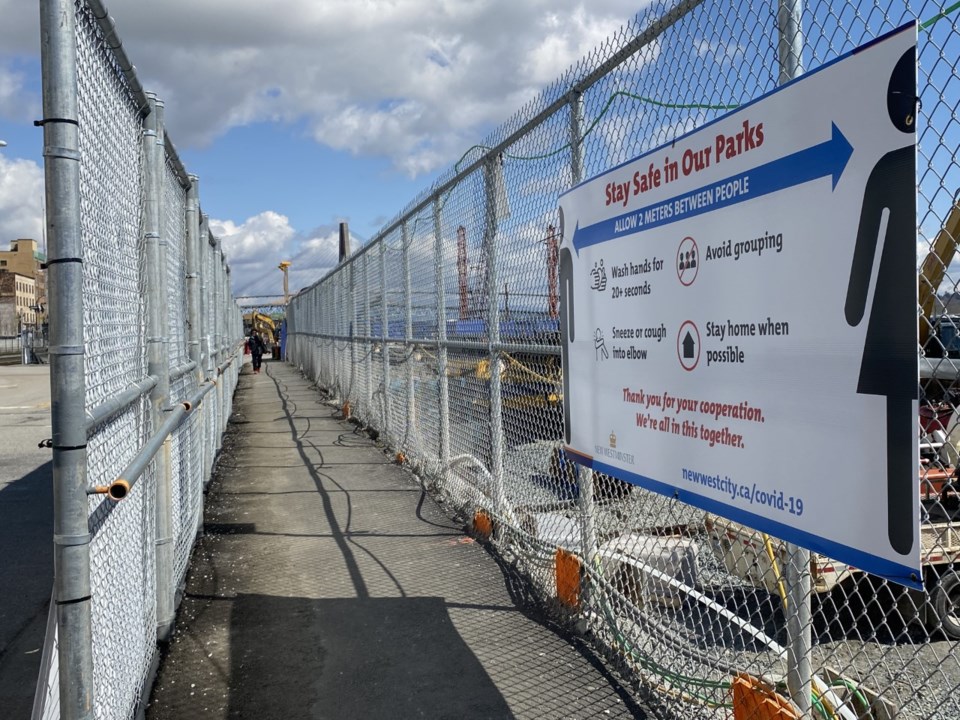 Access to Westminster Pier Park, which goes through the Bosa development site on the waterfront, is one of the "hot spots" for compliance related to health orders. City council regularly receives updates from several task forces created in response to COVID-19, including an education and enforcement working group, and wants to use lessons learned from the city's responses as it moves into recovery planning.

New Westminster’s waterfront is still open – but people need to follow social distancing guidelines if they want it to stay that way.

Dean Gibson, the city’s director of parks and recreation, said the number of people using the waterfront esplanade is becoming more of a challenge for the city to manage in terms of making sure people adhere to proper physical distancing recommendations. With the Easter long weekend coming up and temperatures expected to reach the mid-teens, he said staff fear there will be “further pressures” on some of the city’s outdoor spaces.

“We have been having increasing pressure within our parks,” he said. “We don’t have counters in all of our park sites like around the region, but a good index would be that from the Metro Vancouver regional parks system. They have reported an over 40% increase in park use at their facilities around the Lower Mainland compared to the exact same period last year, and with very similar weather between last year and this.”

On Monday, Gibson gave city council a heads-up about changes being considered on the waterfront in the coming days. Details are still being finalized.

“We want to, over the course of this week, implement some additional measures to help manage the movement of people in some of our parks,” he explained.

Members of the public are still gravitating to outdoor spaces, and the city encourages that to happen – with the appropriate conduct, Gibson said.

“It’s very much our focus and priority now to promote awareness and the appropriate practice of physical distancing in order to mitigate any further closures of features within city parks,” he said. “The latter part of the message is something we really want to be front and centre with – the extent to which we are able keep our public spaces open to the public can be determined largely by the amount of priority they place on ensuring those physical distancing measures are in place.”

Over the past weekend, Gibson said the city had to close its tennis courts and lacrosse boxes because people were not complying with social distancing requirements.

New Westminster’s waterfront is an area of particular concern for city officials because its scenic location attracts folks from across the city.

Beyond some additional signage that encourages appropriate physical distancing, Gibson said the city is looking at ways to introduce “directional travel” that minimizes face-to-face contact between people on the waterfront esplanade.

“It’s where that face-to-face contact is happening within that two-metre safe zone, if you will, that is the area we are trying to minimize as much as possible,” he said. “To provide that type of physical separation, we are looking at trying, wherever possible, to use existing features to help delineate the appropriate direction of travel, as opposed to putting markers on the sidewalk or having to use barricades. We think many of our sites can naturally work in our favour with a little bit of way-finding to help encourage appropriate use by the public.”

Access to Westminster Pier Park from the waterfront, near Fraser River Discovery Centre and River Market, is a particular issue the city is attempting to address. To get to Pier Park from the west side, visitors must currently walk through a pathway on the Bosa construction site.

“It is a fairly narrow corridor with limited clear sightlines, which is providing some physical constraints for social distancing – even those moving through that area with the best of intentions,” Gibson said.

Gibson said the city is considering the introduction of one-way travel through the Bosa corridor during peak times of the day. After entering the park from that spot, people leaving the park during those peak hours could be directed to alternate routes out of the park – Columbia Street and Front Street – by signage and onsite personnel.

Aside from the west-side access to the park, visitors can get in and out of the park via an elevator and staircase at Fourth Street on the Front Street parkade.

Gibson said the city wants to maintain as much access to Westminster Pier Park as possible, as it extends the waterfront experience for members of the public and it provides “more eyes” in the park, which help the city monitor and promote positive behaviors in the area.

Gibson said staff’s recommendation is to try to maintain that connection route in some way; if that’s not successful, he said the next step would be to close that entrance to the park.

Coun. Mary Trentadue isn’t convinced people will follow the one-way travel through the Bosa site. Given that it’s a very narrow corridor, she thinks it’s a “huge problem” for people to be walking safely in both directions through that corridor.

“I am concerned that with the nicer weather that we are going to be getting, and people are getting a little stir crazy, they are going to want to get out. I am concerned about trying to have people follow routes and maps, and also having traffic control responsible,” she said. “I wonder if it might be a better choice to actually close that for a shorter period of time so that we are not putting anyone at risk.”

Coun. Chuck Puchmayr suggested signage should be posted telling people they “absolutely have to respect social distancing” and warning the city may have to take further action if that’s not done.

“I think there are some creative options available to us,” said Coun. Jaimie McEvoy. “I don’t want to get into taking more measures than are actually recommended by the province. I have been watching the press conference every day. Dr. Henry is actually pretty clear that people should go outside, people need exercise.”

Mayor Jonathan Cote said the riverfront is always a busy area when the weather improves, but there are other places residents can go to enjoy the outdoors and get some exercise.

“I did go down to the riverfront this weekend and it was incredibly busy. I haven’t seen that in some of the other parks,” said Cote, who lives downtown. “I think we have to find ways to better manage the flow of people to ensure that social distancing can occur on our riverfront, but I think we also have to try and encourage people to be doing their walk in their own local neighbourhood or their own local park.”

2563
Luxurious residences are setting a new standard of living in Langley
311
New West now grappling with second big COVID-19 outbreak
251
Opinion: This protest in front of NWSS against an affordable housing project is ridiculous
219
New West rapid access clinic opens as 'safe way to get sober'
210
UPDATE: Here's where you could be able to buy cannabis in New West