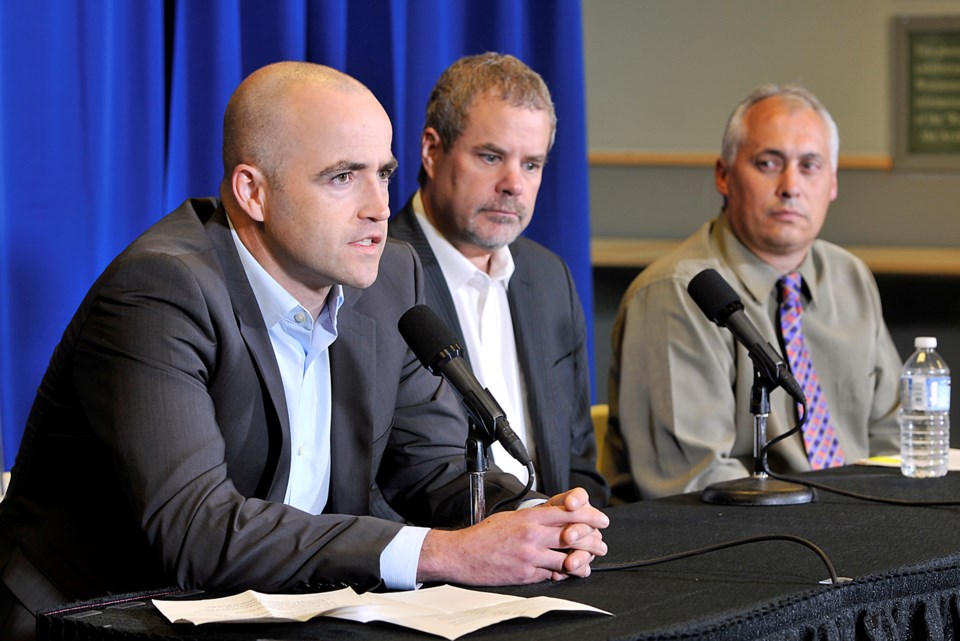 It’s game over for a proposal that would have seen pro soccer played in Queen’s Park Stadium.

On Monday, New Westminster city council rejected a proposal by the Whitecaps to establish a United Soccer Leagues pro franchise in Queen’s Park in March 2015, saying the plan would be too costly.

The proposal would have cost $11.4 million to refurbish the stadium, relocate baseball to another field and replace the stadium’s grass field with artificial turf. While the city’s five-year capital plan had about $3 million that could be moved up in the plan and put toward the proposal, it would have left the city with an $8.4 million funding gap that would have required the city to borrow funds. The Whitecaps would have contributed funds toward the endeavour through rental of the facility.

Coun. Lorrie Williams was disappointed the plan didn’t work out, but believes council made the best decision for the city.

“It seemed like we were turning down a star, we were turning down a golden opportunity to have something extra special that would set New Westminster aside,” she said.  “Even after all the arguments pro and con on both sides, it really came down to the numbers. It really did. The numbers and the time. There wasn’t enough of either. There wasn’t enough to close the (monetary) gap of what they wanted and what we could provide.”

Coun. Jonathan Cote said it became very clear when the city received the financial information that the costs were too significant. He said the majority of the costs in the $11.4 million plan aren’t included in the city’s five-year capital plan so it could have had very negative impacts on the city financially and could have impacted up to 15 other capital projects.

“There was not going to be any financial contribution upfront to assist the city in contributions,” he said. “Ultimately, the financial numbers just did not make sense.”

Puchmayr said the anticipated economic benefit the city thought would result from the proposal didn’t materialize when the city crunched the numbers. He said the city was left with an “immediate exposure” of $11.4 million, money the city would have recouped through rental of the facility.

On July 8, Vancouver Whitecaps FC and the City of New Westminster announced they had signed a memorandum of understanding to work toward launching a team at Queen’s Park Stadium next spring. Since that time a number of groups, including the New Westminster Chamber of Commerce, the Royal City Youth Soccer Club and the Queen’s Park Residents' Association have supported the proposal, while members of New Westminster Baseball and residents from all parts of the city have voiced concern about the proposal’s impacts on existing sports groups, the timeline for making a decision, parking, traffic and the cost to the city.

“I feel very, very badly that we brought something up without the proper consultation, the time of the year,” Mayor Wayne Wright told a crowd in council chambers Monday night. “We made some divisions in our city, which is never our intention. I want to apologize to you.”

Puchmayr said the proposal needed to go through a 12- to 18-month process, not a three or four month review.

Coun. Bill Harper said supporters outnumbered opponents, but the proposal
didn’t match up with the “prudent type of methodology” the city uses to make financial decisions.

Coun. Jaimie McEvoy said it would have been heavy handed to dismiss the concept out of hand without considering it. Ultimately, he said the city wasn’t able to resolve issues about the projects cost, impact on projects in the city’s capital plan and compacts on neighbourhood livability and parking.

Coun. Betty McIntosh said the proposal would have had a domino effect on community sports teams, as baseball could have been relocated to Hume Park, and ball players at Hume Park would then have had to be relocated elsewhere.

On Monday, the Vancouver Whitecaps issued a statement about the city’s decision.

“Four months ago, an opportunity was brought to us to bring a Whitecaps FC USL PRO team to the City of New Westminster. Today, we are disappointed by city council's decision not to proceed with this proposal,” stated the Whitecaps in a statement by president Bob Lendaruzzi and chief operating officer Rachel Lewis. “We truly appreciate the support we received from members of the New Westminster community and are thankful to those residents and businesses – as well as our supporters – for all of their efforts.”

The Whitecaps still believe in the importance of fielding a USL PRO team and are focusing on finding a home for a team starting in 2015.