Kids can get cooking with Mini Chefs Camp in New Westminster in July and August. The camp for three to five year olds teaches little ones new skills and shares new flavours with them. They also learn about kitchen and food safety.
May 24, 2019 10:52 AM By: Janaya Fuller-Evans 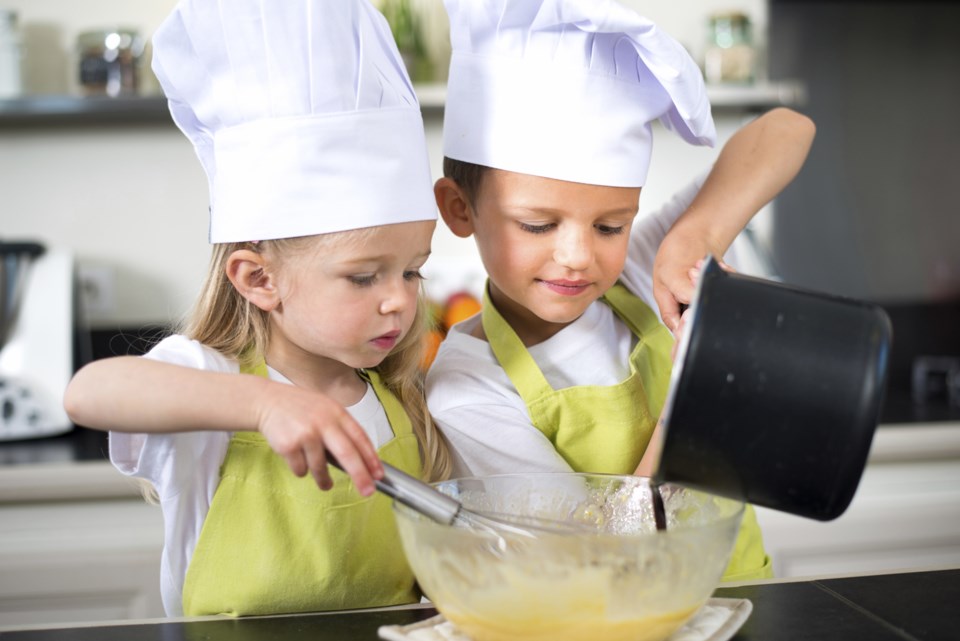 The future mini master chefs in your house can get their hands on cooking in a spring program at Centennial Community Centre.Thinkstock

Kids can get cooking with Mini Chefs Camp in New Westminster in July and August. The camp for three to five year olds teaches little ones new skills and shares new flavours with them. They also learn about kitchen and food safety.

The camp is just one of many offered by New Westminster Parks and Recreation, including dance, painting, cartooning, graphic novel, coding, and rock star music camps. There are camps available for kids of all ages, from preschoolers up to teenagers.

The city also offers day-long camps for one week in June. The Junior Club Royale is for five to nine year olds, and the Kids Club Royale is for 10 to 12 year olds. Both clubs take place at Queen’s Park Arena and they focus on a daily activity and outing. Before and after care is available.

To see the full offering provided by the city, check out the Summer Living Guide, at www.newwestcity.ca/parks-and-recreation/recreation/active-living-guide-and-brochures

Douglas College also offers summer camps for those who are six to 17. There are sports and computer camps, artists and writers’ camps, video game design, digital photography, junior Royals soccer, junior broadcasters and many others available.

Those who register by May 30 can get an early bird rate on the camps, as well.
For more on these and other camps at Douglas College, go to www.douglascollege.ca/programs-courses/continuing-education/sports-institute/youth-programs/summer-camps

There are many organizations, schools and businesses that also offer camps in the city, from those with an artsy bent to sportier fare.

Children can experience all the fun of joining the circus at the Vancouver Circus School’s classic summer camps. The camps, for ages six to 16, allow the kids access to high flying aerial silks, trampolines, and juggling props.

For more information on the camps and how to register, go to vancouvercircusschool.ca/camps/new-Westminster

To learn more about Camp Red Tiger, go to www.redtigermartialarts.com/camp-red-tiger

If your child wants to be the next Robin Hood, archery camp might be a good place to start. Boorman Archery offers archery summer camp to kids from 9 to 18. Those who attend learn to shoot with a recurve bow, and also learn about safety, equipment set up, and archery skills.

Information about the camp and how to register can be found at boormanarchery.com/products/first-step-archery-school-for-kids

Musical theatre is the flavor of the day camps at The Stage. Those who are ages six to nine can attend weekly classes from July 2 to Aug. 2, while those 10 to 12 years old can attend from Aug 6 to 9.

For more on the camps, go to www.thestagenewwest.ca/program/musical-theatre-day-camps

Music Box also offers camps to bring out the musical side in kids, with Music for little Mozarts for ages three to five, Hello! Camp for those five and a half to eight years old, rock band camp for those six to 10.

To learn more or register, go to www.musicboxnw.ca/summer-camps

416
New NWSS has cost $88.5 million so far. Next step: demolition
257
New Westminster school district eyes 'seamless' child-care plan
223
UPDATE: Here's where you could be able to buy cannabis in New West
179
New Westminster police board stands by its proposed 2021 budget
176
Opinion: Now NIMBYs are whining about shadows from new housing