Exposure notice at Fraser River Middle School is that school's second since the beginning of the school year
Oct 19, 2020 8:49 AM By: Julie Maclellan 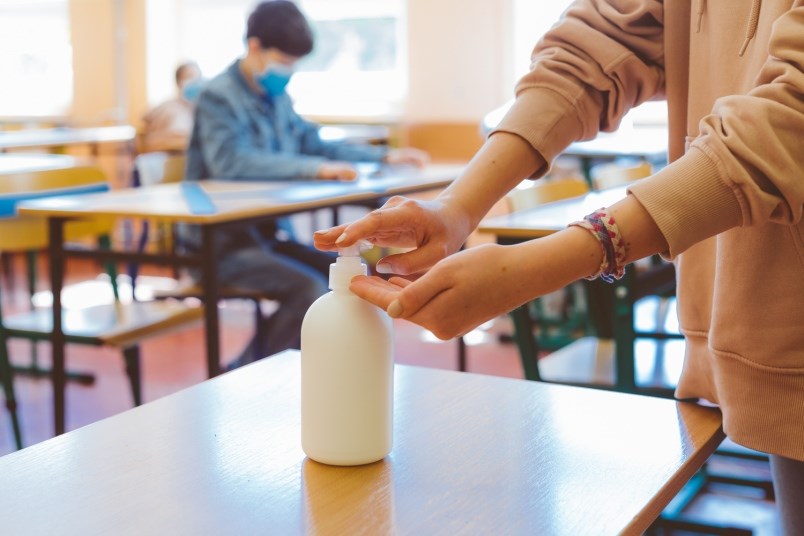 Health officials continue to reassure parents that COVID-19 exposure notices in schools do not mean that transmission is occurring in school settings. Fraser River Middle School has been added to the COVID-19 exposure list for the second time this year.Getty Images

Fraser River has been added to the Fraser Health list of school exposures. According to the list, the exposure occurred on Oct. 7 and 8 – which means that a person who has since tested positive for COVID-19 was in the school on those days.

It’s the fifth such notice in New West schools since the beginning of the year, with the others occurring at New Westminster Secondary, Queensborough Middle and Lord Tweedsmuir Elementary.

“A notification does not mean your child has had a confirmed exposure to COVID-19 – the letter informs you that an investigation is occurring,” Karim Hachlaf wrote in a letter to district parents on Oct. 1 regarding the district’s COVID protocols.

As with all COVID-19 cases in schools, Fraser Health takes over the handling of the case, including contact tracing. Anyone determined to be a close contact of the person will be contacted directly by public health officials.

“Only Fraser Health can determine who is a close contact and who needs to self-isolate. In general, school-based measures to protect against onsite transmission have been implemented successfully. Fraser Health is likely to contact only a small number individuals in the school,” Hachlaf said in the letter.

The letter notes the contract tracing process typically takes two to four days from the time Fraser Health receives notification of the positive test results – depending on the number of contacts involved, the type of interactions and the speed of replies.

As to whether extra cleaning is required following an exposure notice, Hachlaf noted the following: “As soon as the district is notified of a possible exposure, the custodial team is engaged to verify the school has been fully cleaned and disinfected since the last date the person with the positive case was on site and to determine whether additional cleaning and disinfection needs to be done.”

Dr. Bonnie Henry, the provincial health officer, has continued to assure parents that the COVID-19 protocols implemented in schools are working.

In a media briefing Oct. 5, Henry noted the testing rates among children have gone up significantly since the return to class, with rates now four times higher among children aged five to 12, and two times higher for teenagers, compared to rates before school started. Despite that increase in testing, however, the positive test rate remains low – about seven in 1,000.

Henry said the return to class has not come along with a jump in COVID-19 cases.

“The proportion of COVID-19 cases, by week, in school-age children remains low, less than 10%, and that has been consistent in the first three to four weeks since schools opened,” she said.

Henry said the focus on contact tracing – to ensure that close contacts of anyone who has tested positive with COVID-19 isolates appropriately – was proving to be effective.

“We need to recognize that our goal, our overriding goal, is to ensure that kids are safely in school. What we have seen and what we continue to see are very low exposure events and very few, if any, transmission events in schools,” she said.

“What we’re not seeing is schools amplifying transmission in a community.”