New Westminster school trustees are skeptical of a five-year commitment to a program that seeks to bring equitable access to nutrition in schools as the district considers expanding the program.
Jun 12, 2019 1:06 PM By: Dustin Godfrey 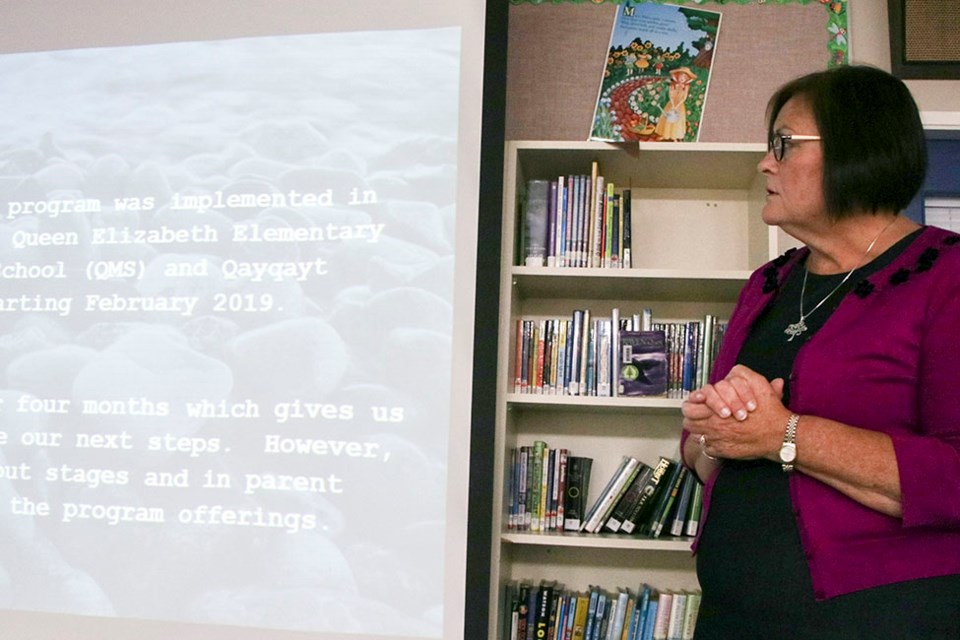 New Westminster School District director of instruction programs and planning Quirine Gamblen presents to the education committee on the pilot nutrition program, calling for a five-year extension to the program that would expand to more schools.Dustin Godfrey

New Westminster school trustees are skeptical of a five-year commitment to a program that seeks to bring equitable access to nutrition in schools as the district considers expanding the program.

The current nutrition program has been running since February this year in Queen Elizabeth Elementary, Queensborough Middle and Ecole Qayqayt Elementary schools, and staff say they’re already seeing positive effects of the program.

The program includes a hot and cold menu with gluten- and allergy-free options and culturally diverse menu options, and for families in need, who self-declare and are verified by the school principal, can get a subsidy for the program.

For several trustees on the education policy and planning committee committee, the main sticking point moving forward was a five-year commitment to the program expected by the caterer.

In particular, trustee Maya Russell questioned whether the district could take the program in-house for the same or a lower price. However, staff said a centralized in-house program would not be feasible with the district’s available space.

Trustees also questioned whether the district had fully considered its options on a catering partner for the program.

But staff said they’re not likely to get a better deal – in a request for proposals to kick off the pilot program, staff said they were disappointed with all of the other options that came forward.

“It was not something that I would have felt proud putting my name behind,” said outgoing school nutrition co-ordinator Cyndi Adams in a presentation to the committee

The program is running in partnership with Ready Maid Meals, a Burnaby-based catering company run by Chef Gary Hovey.

“It’s been a really wonderful relationship that we’ve  had with the caterer. I have been continuously impressed by the commitment that they’ve had to the program,” Adams said.

Despite only four months of data so far, director of instruction programs and planning Quirine Gamblen said staff believe the program is sustainable and could be brought to the other schools in the district.

University of B.C. researchers are also monitoring the program and gathering data.

“The UBC researchers … are also reporting that there’s a bit of a social culture around the food delivery to classroom,” Adams said. “There is a little bit of trading going on in the classroom with some things that they brought from home, and they’ve developed a currency system around it. Different foods do have different value in trading at school.”

Gamblen said surveys being done by the school district is showing that the program is also gaining popularity among staff and parents.

The subsidy is intended to be accessible without stigma to the student – parents can declare their need for the subsidy, and all of the food comes into the school without any indication that the student received the subsidy.

“What we’re seeing is that even parents who require some subsidy are also wanting to pay. So most of our families who are accessing the subsidy program are accessing partial, paying at least a dollar [per day],” Gamblen said.

If the current agreement being sought is approved, the district would be paying for $15,500 in equipment to hold hot food, while the caterer would also need to invest in further equipment, including delivery vehicles.

With Adams leaving the district, staff hope to have a renewed contract with the caterer for the service by the end of the school year.

630
New West sees big jump in COVID-19 cases
607
Opinion: Now NIMBYs are whining about shadows from new housing
433
Here is how fast COVID-19 can spread after a road trip in B.C. (INFOGRAPHICS)
411
Filming in New West: A bright spot in a challenging year
401
Pfizer temporarily reduces European deliveries of vaccine