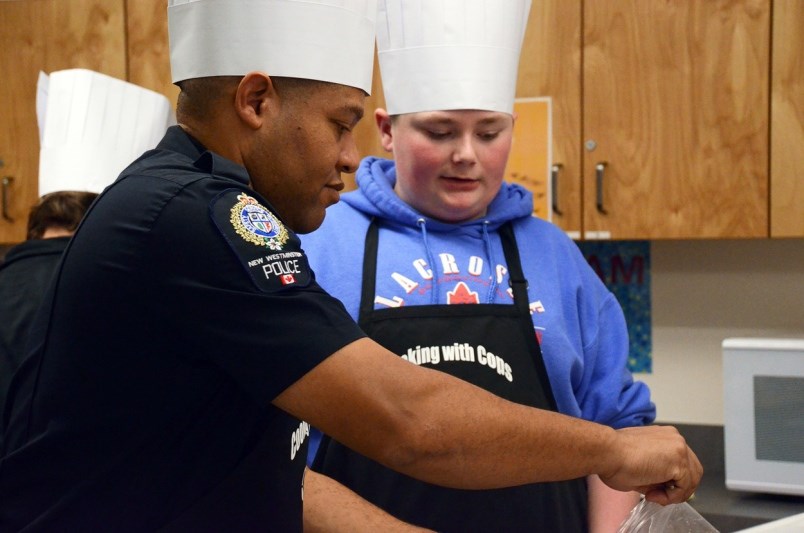 New Westminster police officers joined forces with students for a Cooking With Cops event in December 2018 - one of many initiatives undertaken by the school liaison officers. The future of the police liaison program - a partnership between the New Westminster Police Department and the school district - is now under review.Record files

The New Westminster Police Department’s school liaison officers have been temporarily reassigned to other duties as the school district embarks on an in-depth review of the presence of police in schools.

The New Westminster school district and the police department have a long-standing partnership in which the NWPD provides child and youth liaison officers to support local schools. But the future of that partnership is now up in the air against the global backdrop of protest in the wake of killings of Black and Indigenous people during encounters with police.

“A lot of conversations around systemic racism, privilege and equity have been brought to the forefront,” said Maureen McRae-Stanger, the school district’s director of instruction, during a report to trustees at the board’s education committee meeting Tuesday night (Oct. 13).

She noted there are three child and youth liaison officers in New West: one who serves the district’s 11 elementary and middle schools, one who serves New Westminster Secondary School, and a community-based officer who works with the district’s alternate programs and provides extra after-hours support. The officers, who receive specialized training for the positions, are paid for by the police department.

All three have been temporarily reassigned to other duties.

McRae-Stanger spoke about a long list of positive projects undertaken by the liaison officers – from making presentations to students on issues such as vaping, substance use and gang prevention, to advocating for students who get involved in the justice system and mentoring at-risk youth.

McRae-Stanger said the district will continue to need an ongoing police presence in schools in some form.

“They are an integral part of safety in our schools,” she said, noting they will always be needed for emergencies, critical incidents and lockdowns, as well as suicide risk assessments and violent threat risk assessments.

But McRae-Stanger acknowledged the presence of police in schools isn’t a positive experience for everyone. She said the district needs to look at the issue through a “trauma-informed lens,” noting that both the school system and police can be sources of trauma for BIPOC (Black, Indigenous, people of colour) communities.

“We have to be aware of this, and we have to value the impact of trauma on our staff, students and communities,” she said.

McRae-Stanger said the district needs to revisit its memorandum of understanding with the NWPD and consider the issue in the broader context of the anti-racism policy work trustees have agreed to undertake.

She said a review needs to include consultation with stakeholders, including families and students.

Trustee Mark Gifford warned that a consultation process could be difficult, pointing out many students might not feel safe having a conversation about policing in schools.

“That’s a hard conversation for a young person, for anyone, to let their guard down,” he said.

Gifford noted the complexities of the issue, expressing appreciation for the people who are involved in the work and a respect for the relationship that’s in place between the school district and police department.

But he pointed out that the presence of police can be “trauma-making” for some communities.

Trustee Maya Russell said she has “very conflicted feelings” about the subject, noting she has police officers in her family for whom she feels great respect and that she also has Black family members who feel very differently.

“I do think that the moment calls us to continue to take a very hard look at the program,” she said.

McRae-Stanger said the district will be guided by research on trauma-informed practice as it moves forward, adding the district doesn’t intend to rush the process.

“We’re at the early stages of this work,” she said.