New West school board commits to net-zero emissions by 2050

An environmental group is applauding the New Westminster school board for committing to ambitious climate targets.
Dec 3, 2019 12:26 PM By: Dustin Godfrey 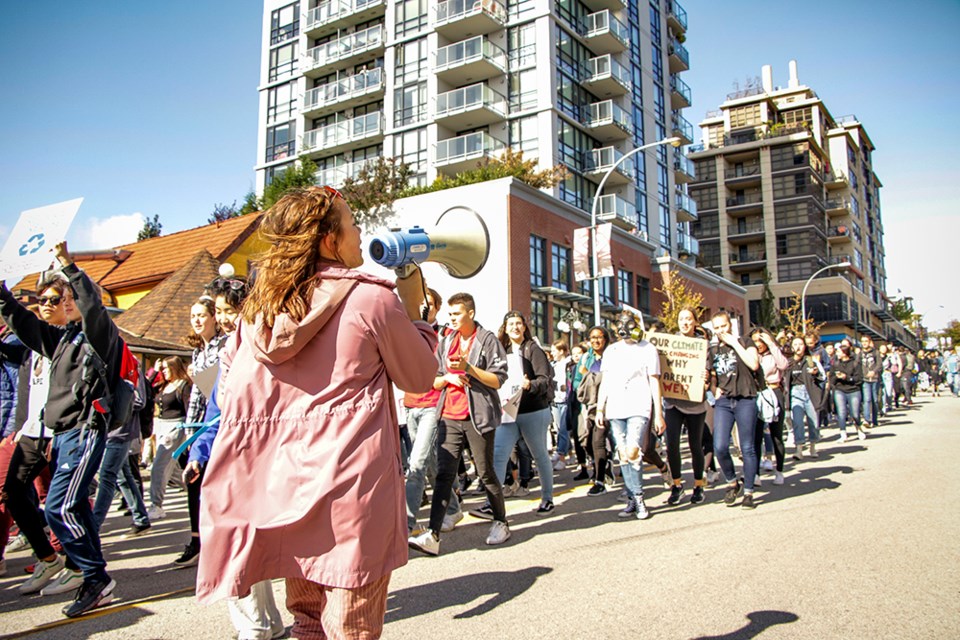 Hundreds of students from New Westminster Secondary School marched down Sixth Street to the New Westminster SkyTrain Station and headed to Vancouver City Hall to protest in favour of drastic climate action as part of the international climate strike.Dustin Godfrey

An environmental group is applauding the New Westminster school board for committing to ambitious climate targets.

While the 2015 Paris Agreement asked countries to commit to reducing fossil fuel emissions by 30% below 2005 levels by 2030, the Intergovernmental Panel on Climate Change released a report in fall 2018 calling for stricter targets to avoid the worst effects of climate change.

After voting to declare a climate emergency in October, school board voted in November to commit to the IPCC targets, making it the first school board in the Lower Mainland to make such a commitment.

“As a high schooler, seeing my school district take action inspires me to take bold action on an individual level, as well as to continue to advocate for climate action on a systemic level,” said Grade 12 student Jade Bouchard, a volunteer with Force of Nature and member of SD40 for the Climate.

“I hope to see students graduating climate literate in the next few years, and hopefully other school districts will step up and take even bolder climate action.”

Trustee Gurveen Dhaliwal, who brought forward the motion for school board to declare a climate emergency and create a plan to reduce emissions, said staff will come forward with a report in September 2020 on how to reach those goals.

“For us, the ‘now what?’ is understanding what are measurable targets and timelines and goals, and how are we going to incorporate that into our school district?” Dhaliwal said.

Dhaliwal said a big challenge for the district will be its buildings. According to a 2018 Canadian Senate report, residential, commercial and industrial buildings account for 17 per cent of Canada’s emissions, largely due to heating.

For the school district, buildings make up the vast majority of its emissions, meaning that will have to be a focus of the board.

Dhaliwal called the current rebuild of New Westminster Secondary School a “lost opportunity,” but one she doesn’t intend to repeat with the forthcoming rebuild of Richard McBride Elementary School.

“Moving forward, how we go about the maintenance and all of our capital projects, it needs to include the climate lens on it,” Dhaliwal said, adding that the NWSS plan came before her election.

“When we’re asking staff to consider climate action and climate change in our capital plans, it’s directly referring to any new builds. So yeah, I do intend to see Richard McBride a part of that conversation.”

Newly elected school board chair Anita Ansari said taking further action on the remainder of the district’s buildings will add more challenges – particularly as the vast majority of funding for capital projects comes from the B.C. government.

The New West school board won’t be alone in advocating for more funding for environmentally friendly retrofitting of buildings, presenting a double-edged sword. More school district voices could equate to more funding from the B.C. government, but it also means more competition for that funding.

Dhaliwal said she also expects the school district to be advocating for more climate literacy in the provincial curriculum.

Although staff won’t be making a final report to the board until September 2020, Dhaliwal said she expects updates between now and then, particularly noting she expects to see a climate lens applied to the 2020/21 budget in the spring.