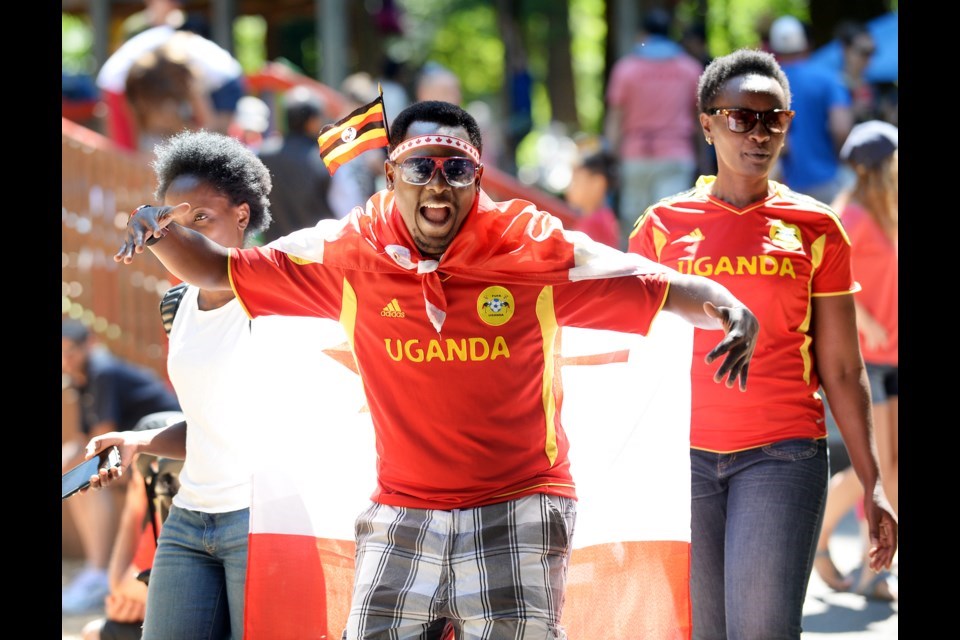 Justus Mirembe donned Uganda attire – and a Canadian flag, at the city's 2017 Canada Day festivities in Queen’s Park. Changes are in the works for Canada Day 2021.File

Instead of fireworks and festive celebrations, Canada Day is being planned as a Day of Reflection in New Westminster.

On Monday, council received a report from the Canada Day planning committee, which outlines a July 1 program that emphasizes opportunities for connecting cultures and people, while exploring and discovering the local community.  Staff said the program had also been updated to acknowledge the current times being faced by the city and the country, in light of the recent discovery of 215 children’s bodies at the Kamloops Indian Residential School, the killing of a Muslim family in Ontario, and the city’s ongoing work to  address diversity, equity, inclusion and anti-racism.

Programming changes to this year’s Canada Day in New West mean there won’t be a big celebration at the Queen’s Park bandshell or firework on the waterfront. The city’s website also includes the following description of the day:

“Canada Day 2021 – A Day of Reflection – New Westminster is committed to fostering an equitable, inclusive and welcoming community. This Canada Day we encourage everyone to respect and recognize cultural diversity as a source of enrichment and strength, as they are common features in all cultures. We acknowledge the hurtful legacy and ongoing impacts of colonization and the harm caused by acts of discrimination, and look to this Canada Day as an opportunity to grow and heal together.”

The City of New Westminster’s program for Canada Day 2021 focuses on activities related to food (such as a farmers’ market, food truck drive-thru and meal offerings), movement (including an interpretive walk in Queen’s Park, family yoga, juggling and circus arts) and creativity (a found objects collage, family activity kits). Full details of all the events can be found at www.newwestcity.ca/canada-day-2021.

This year’s Canada Day program also includes a medicine wheel healing and teaching, presented by the Spirit of the Children Society, in memory of the children found at the Kamloops residential school.

And instead of the traditional red for Canada Day, the city is encouraging community members to wear orange ribbons and orange T-shirts.

Some council members, however, don’t feel the city has gone far enough to rethink Canada Day.

“I guess I want to thank staff for the work that they have done in reconfiguring Canada Day to some extent,” said Coun. Mary Trentadue. “I will say that I don’t think we have gone far enough to change what our Canada Day looks like this year.”

Council unanimously approved a motion by Trentadue to have staff review all city events and recognized holidays and report back to council with options for decolonizing city events and including more diverse and cultural holidays to be recognized and celebrated in the city. The motion states the review should consider history, diversity, cultural implications and inclusion, and the review should include city events, holiday greetings and communications, and city programming and activities.

Trentadue said a lot of the events in the city “are just programming that has been done historically, without a lot of consideration,” so she thinks it’s time for a comprehensive review.

“I think a review of Canada Day is in line with reviewing all of the holidays and programming that the city does going forward,” she said. “I feel that there is a bit of urgency to this. ... I know we have events coming up as soon as we are able to gather, and into the fall. I would like some of this work to be done in a more timely way.”

Coun. Nadine Nakagawa said she would much prefer to see a scaled-down version of Canada Day programming. Noting that the discussion about Canada Day 2021 occurred on National Indigenous Peoples Day, she wholeheartedly supported Trentadue’s motion.

“Canada Day is a celebration of a colonial nation,” she said. “While at the same time we are on National Indigenous Peoples Day and grappling with the impacts of that ongoing colonization on Indigenous people across this land.”

Coun. Patrick Johnstone said there’s no doubt that Canada Day is going to be different in 2021 than in past years. He supports the work done by staff to help make this year’s Canada Day a time for reflection.

“As a settler, as a person who grew up in Canada, just not in any way being educated about the history of Canada, I am stuck in that duality of being both proud of what Canada represents on the world stage, as far as multiculturalism and being accepted and being a nation where we settle differences through dialogue and through honest discussion, versus the horrible colonialism that took place in Canada and is still being felt today in Canada,” he said. “I feel that duality. I feel that we can mark and be cognizant of the bad parts of what Canada is and still be proud of the good parts of what Canada is.”

Johnstone said everyone isn’t in the same place when it comes to finding the balance between the good and bad parts of Canada.

“I think we are all learning and we are all on our own journey here,” he said. “I would not have been comfortable this year with the bandshell and music and fireworks and the traditional celebration that we had. I wouldn’t have been comfortable with that this year but I also would not be comfortable to tell people that if they want to have a Canadian flag in front of their house, ‘That’s not something we want to see this year;’ I feel that people need to find their place here.”

Coun. Jaimie McEvoy said he’s not a big fan of symbolic gestures, which are often genuinely felt and well-meaning, as he prefers transformative change.

McEvoy said he expects that in a couple of years the city will be able to look back with pride at the social justice changes that have been made in the community.

“The way to get there is for us to really work together and do this in a really well-thought-out way. Because if there is anything that we have learned, it is often what people do on behalf of others isn’t always what they wanted or what they benefit from. So it has to be done carefully and thoughtfully,” he said. “I am happy with the changes to Canada Day that have occurred. I won’t argue that it’s adequate, but I will argue that it sets us on the right direction for what might eventually become adequate.”