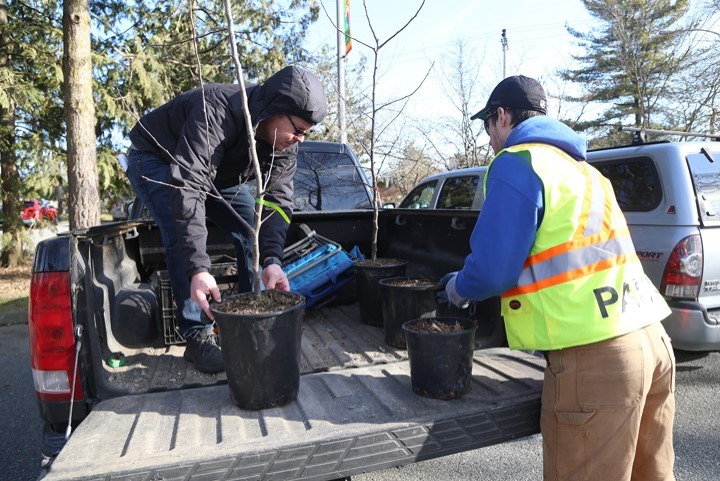 The City of New Westminster sold 151 trees to residents during its inaugural tree sale. the sale is one of the initiatives being undertaken by the city to grow the urban tree canopy.Lisa King

Dozens of trees have found new homes in New Westminster.

In an effort to help grow the city’s tree canopy to 27% by 2030, the City of New Westminster has a strategy that includes the planting of 3,330 new trees on private land and 8,500 new trees on public land, including new street trees (6,300) and new trees on city-owned park and civic lands (2,200). One of the ways the city plans to increase the tree canopy is through a tree sale.

Erika Mashig, the city’s manager of parks and open space planning, design and construction, said the inaugural tree sale was very successful. The city sold 151 trees to residents, who preordered their trees and picked them up at Queensborough Community Centre on March 14.

“New Westminster’s first tree sale was a popular event, aimed to encourage residents to plant trees on their private property,” she said in an email to the Record. “The trees sold out by 11:20 a.m.”

“Residents were excited to pick up their trees and were impressed with the level of organization and staff help to load the tree into their vehicle,” Mashig said. “The city also provided instructions for planting, tree care and a pail full of mulch. There was a good mix of single-family homeowners and condo owners picking up trees on behalf of their strata.”

The City of New Westminster plans to hold another tree sale in the fall of 2020.

According to the city, city-community partnerships are the most effective way to help the city increase its urban forest canopy cover to its 27% target , which would support the removal of 4,050 tonnes of carbon pollution every year.