Fifth Street residents are anxiously awaiting to see what the city has in store for their neighbourhood.
Jan 25, 2017 4:48 PM By: Theresa Mcmanus 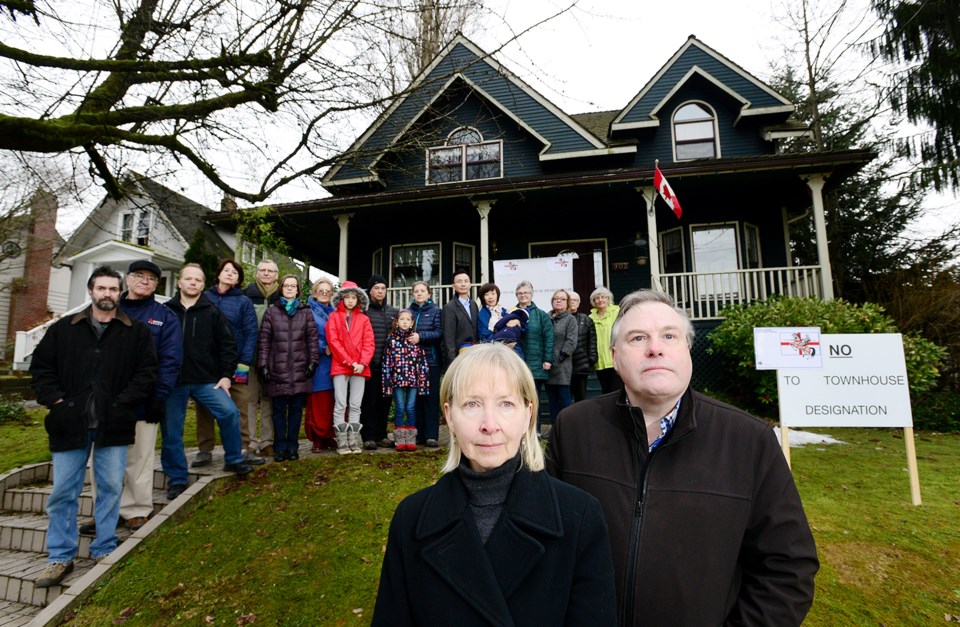 save our street Susan Dextras and Don Hauka, front, and fellow Fifth Street residents want the city to abandon a proposal that would see portions of the west side of the street designated as residential-townhouse in the official community plan. Residents believe the same density can be achieved in ways that protect the character of their neighbourhood.Jennifer Gauthier

Fifth Street residents are anxiously awaiting to see what the city has in store for their neighbourhood.

As part of the update to the official community plan, the City of New Westminster is considering a proposal to designate some parts of the west side of Fifth Street as residential-townhouse. In recent weeks, a steady stream of Fifth Street residents has written to city hall and appeared before council to urge the city to reject the plan.

Gordon Lamont, who has lived on Fifth Street for 11 years, is disappointed the OCP is “targeting” his neighbourhood. He believes basement suites and laneway houses would enable the city to achieve the same density that would be offered by townhouse, but maintain the character of the neighbourhood.

“I believe we can do that with much less of an impact on a neighbourhood,” he said. “For me, if the density targets are satisfied, there is no justification an OCP change for townhouses.”

Lamont noted there are other streets in Glenbrooke North that are pedestrian-friendly and near transit and commercial amenities. “By rezoning only along the edges, you are creating a minority that is affected, while the rest can happily agree that townhouses are a good thing,” he said.

Louiza Zlatovic, who has a master’s degree in architecture, agrees the city needs to have more housing options and provide housing for future residents but thinks that’s better achieved by secondary suites with laneway housing or duplexes on Fifth Street. She believes areas of the city that are not fully established, such as the 12th Street corridor, the downtown and Queensborough, are more appropriate locations for townhouses.

“Our street is very unique. It’s a perfect example of why our city is so special and why it is desirable,” she said. “I came to New Westminster 15 years ago, after looking to buy a property for several months. When I walked on that boulevard – that was my house. That boulevard is something that I think should be preserved.”

Don Hauka urged council to take a “fresh look” at Fifth Street and consider the historical role and potential of the entire corridor from Third Avenue to 10th Avenue. The street, once envisioned to be the corridor leading to the parliament buildings when New Westminster was B.C.’s capital, now provides a habitat for wildlife, has a significant chunk of Glenbrooke North’s tree canopy and has homes representing every epoch in the city’s history.

“That boulevard is our single largest heritage feature, natural feature, in my neighbourhood and I think it’s worth preserving,” he said.

Hauka suggested the city should preserve the natural values of the neighbourhood and develop the street to its potential, by tying it in to heritage walks and creating geocaching opportunities.

In November, a coalition of residents called Yes in New West appeared before council to urge the city to expand housing options in the city by allowing more row houses, townhouses and carriage and laneway houses. The coalition supported the proposal to permit townhouse designations on Fifth Street.

Longtime Fifth Street resident Susan Dextras said 38 of 41 residents signed a petition opposing the townhouse designation proposed for their street. If the goal of the OCP is to offer more options for buyers, she said it should consider townhouses in areas of the city with lower land values so they’re affordable.

“We appreciate that you are wanting to offer more affordable housing to young families. We understand that. Our children are looking for homes as well,” Dextras said. “However, if this new designation goes through at your proposed 15 units per acre, then the townhouses that will be built on Fifth Street will be very expensive luxury units and not the affordable housing that young families are looking for.”

Dextras fears townhouses will gradually destroy the strong sense of community that exists in her established single-family neighbourhood.

“Is this really what we want?” she said. “Is this responsible planning or is it the imposition of an ideology for the benefit of a chosen few at the expense of individual property owners and the character of the city as a whole. That is at essence is what is at stake here for us.”

Why a townhouse designation for Fifth Street?

Lynn Roxburgh, a senior planner with the city, said the concept is based on a desire to have people living close to areas with frequent transit and to have family-friendly housing within walking distance of the high school and Uptown commercial amenities. In addition, she said the large boulevard on Fifth Street would enhance the transition between townhouses and the single-detached dwellings on the other side of Fifth Street.

The first draft of the OCP, including a revised land-use designating map, will be considered by council at an open workshop on Jan. 30.

While the first draft of the land-use map proposed a residential-townhouse designation for the west side of Fifth Street from just below Sixth Avenue to 10th Avenue, Roxburgh said the final draft of the map indicating “the current proposal” for this area will be considered on Monday and will be available online on Friday.