The City of New Westminster is making inroads in its plan to connect businesses and residents through a high-speed fibre optic network.
Nov 6, 2015 2:47 PM By: Theresa Mcmanus 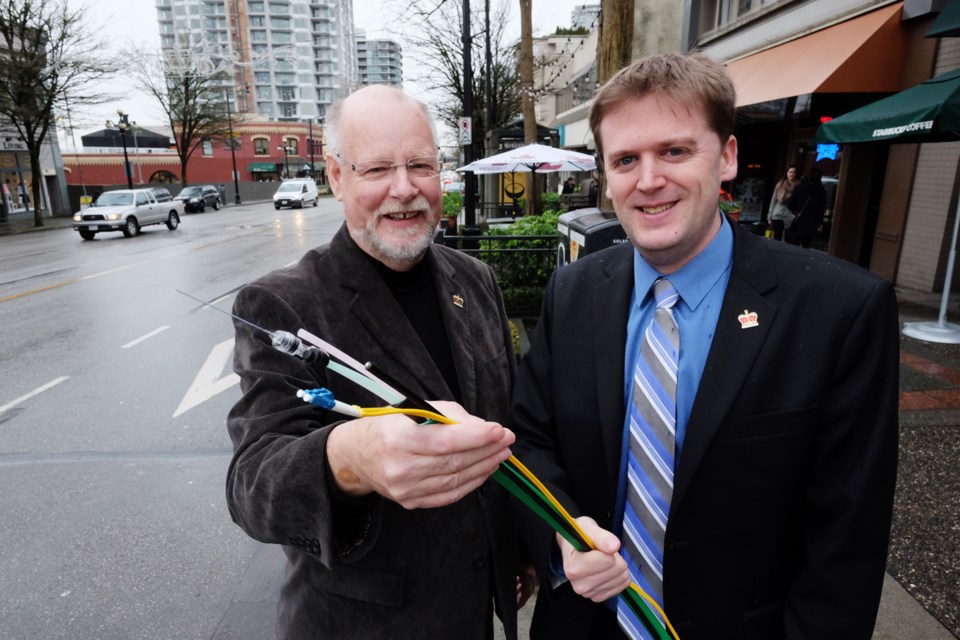 Coun. Bill Harper, left, and Mayor Jonathan Cote are pleased the city is embarking on an initiative to develop an open-access fibre-optic broadband network to foster connectivity and business development.

The City of New Westminster is making inroads in its plan to connect businesses and residents through a high-speed fibre optic network.

Blair Fryer, the city’s manager of communications and economic development, said one of key components of the city’s Intelligent City initiative is to install an open-access, dark-fibre network that connects commercial areas of the city. He said the benefits of a city-owned, open-access fibre network include competitively priced high-speed broadband connectivity, increased employment and investment in the city’s knowledge sector, opportunities for collaboration with telecommunications internet service providers for increased connectivity, creation of a non-tax revenue sources for the city and enhancement of New Westminster’s image as an attractive place to invest.

Construction of the open access dark fibre network is currently underway, with uptown, downtown and Sapperton expected to be connected by the summer of 2016, with the west side and Queensborough to follow by the end of next year, Fryer said.

“A bridge is a passage to new opportunities,” said Estella Lum of Daniel Choi Design. “It promotes uniting residents and businesses with the high-speed connections they need for innovation and success. There’s the word net in it, which clearly indicates the Internet connection. Lastly, it invokes a sense of trust, accessibility, empowerment, support and safety.”

Coun. Bill Harper, who co-chairs the Intelligent City task force, said the hope is that the BridgeNet name and logo will put “New Westminster on the map” with its own brand and fibre network. He said the city has already placed about 17 kilometres of fibre into the ground.

“The best way to look at it is the city will own the roads, and the companies that come in to give access to the Internet to the customers will have to basically build the driveways – they will have to lease the fibre from the city,” he said. “We have a financial plan that runs over about 14 years before we recover the kind of costs we’ve got, and then beyond that we will be expanding and evolving business.”

Businesses and residents will both benefit from BridgeNet, Harper said, as it will create competition among large and small telecommunications providers – and bring the cost down for consumers.

“We are already getting people knocking on our door wanting to hook up,” he said. “I think it’s a good brand. … BridgeNet is really clear. We are a bridge to the future and it’s all about the internet.”