Imagine walking four kilometres through the rain or snow and crossing busy streets to get to school. That could be the reality for some children who’ll be attending École Fraser River Middle School in the fall.
May 4, 2016 3:53 PM By: Theresa Mcmanus 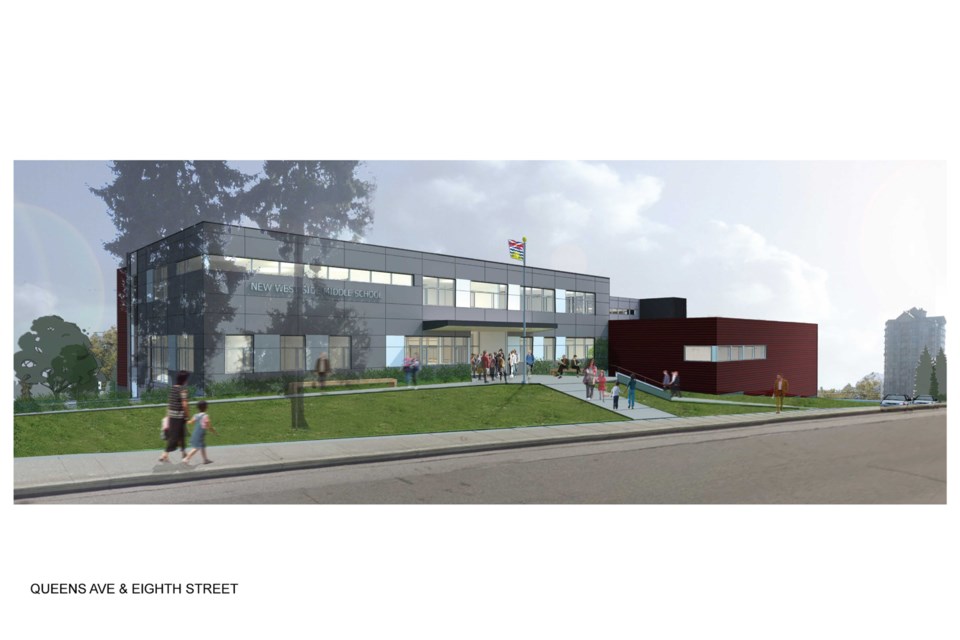 The city has agreed to provide $5,000 toward a pilot project that will bus students to the new Fraser River Middle School, which opens on the former John Robson Elementary site next week.Image courtesy of Yellowridge Construction/THE RECORD

Imagine walking four kilometres through the rain or snow and crossing busy streets to get to school. That could be the reality for some children who’ll be attending École Fraser River Middle School in the fall.

West End resident Krista Burrows appeared before city council Monday night to make the city aware of transportation issues affecting some kids who will be attending the new middle school in September, with some needing to walk more than four kilometres, take a minimum of two buses or take SkyTrain to get to and from school. For students living in Connaught Heights and some parts of the West End, she said it could take 45 minutes for kids to walk to school.

As a result of the walking distances, the routes to school and inadequate bus transportation, some parents have been investigating the possibility of hiring a private charter bus to transport students to and from the middle school.

“The school district did help us in distributing a survey. We received confirmation last Friday from 62 parents who were interested and willing to pay approximately $75 per month for the service. Other parents were also interested but stated they would not be able to pay this amount,” Burrows said. “We would like to be able to ensure the service is accessible for all parents. Parents from Qayqayt and Glenbrook French programs have now also expressed interest in the bus service. As families are exposed to this idea, we suspect that more will come forward with requests for service.”

Burrows told council that another Lower Mainland school district has a similar transportation program, with a business sponsoring part of the cost of the charter bus service. In order to bring the service down to about $50 a month, she said parents are wondering if the city would consider a one-time start-up grant to get a charter bus service up and running.

Burrows said parents have met with TransLink, which indicated it wasn’t willing to change the bus routes as it would impact services in New Westminster, Burnaby and Coquitlam. She said the New Westminster school district has indicated the distance students must travel to school isn’t far enough to warrant a school district-provided bus service.

Coun. Bill Harper said his granddaughter attends Lord Kelvin Elementary School and will be among the students who will have to find her way to the new middle school.

“On a rainy, cold, dark December day, that’s not going to be an easy task. People are going to drive. It’s bad enough now at elementary schools,” he said. “Thank you for the work you are doing.”

Council directed staff to report back to council with information about the transportation issue related to Ecole Fraser River Middle School, as well as Queensborough students who need to get to and from New Westminster Secondary School.

In addition, the city will also contact TransLink about a bus service to schools, will contact the school board to discuss issues related to the opening the school district, including traffic, and will consider the issue of corporate partnerships to assist with funding for a charter bus service.