A Vancouver-based business has decided to make the Royal City its testing grounds for an online platform that aims to connect people with their neighbours.
Apr 27, 2015 4:29 PM By: Tereza Verenca 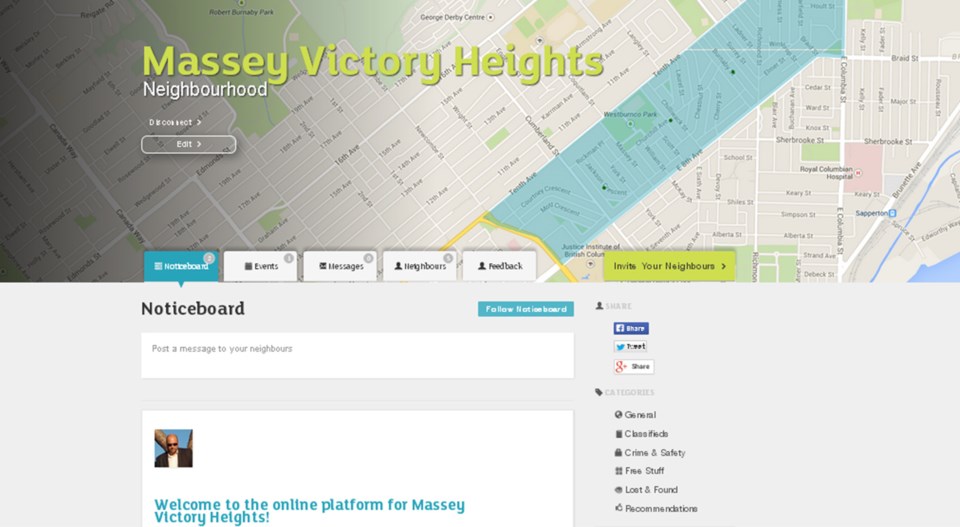 Screenshot: what a resident who lives in the Massey Victory Heights area would see if they logged into their account.Contributed

A Vancouver-based business has decided to make the Royal City its testing grounds for an online platform that aims to connect people with their neighbours.

PlaceSpeak, a company that specializes in uniting people and places via the Internet, has launched  “Neighbourhoods” in 11 New West neighbourhoods.

The free service works similar to LinkedIn and Facebook, where users create an online profile. Unlike other social media sites, PlaceSpeak asks questions relevant only to one’s address. The website then pools together users who live in the same geographical boundaries, providing key features like a community notice board and an events calendar once logged in. Any communication between registered residents is kept private.

"Up until now, online has been anonymous and not place-based," said CEO Colleen Hardwick. "We're trying to change that, to make it so people can choose to connect with their neighbours and message them, and do the kind of things neighbours do."

Hardwick added the online platform could be useful when it comes to simple things like finding lost pets, borrowing power tools or recommending babysitters. Ultimately, she said, the goal is to promote more community engagement.

"It's about the cross pollination between different kinds of topics that will encourage people to become more involved. Someone may have come in for the transportation consultation, but maybe there's something else that's relevant in their neighbourhood, like a school closure."

Excited about the pilot project is Jason Lesage, president of the Massey Victory Heights Residents' Association, one of the 11 participating associations.

"It's just another layer of reaching out to residents," he said. "The demographic is changing. There are a lot of younger professionals who are moving to the city and they tend to be more inclined to be on social media."

Lesage told the Record he'll be using the online tool to spread the word about the various events going on throughout the year, like the upcoming neighbourhood garage sale.

The platform, however, is only as strong as its numbers, he said, arguing the more people that sign up, the better.

Asked why people don't take the time to know their neighbours, Lesage said it's a "21st century condition" caused by busy lifestyles.

Hardwick echoed much of the same, but listed immigration as another possible reason.

"You don't have a lot of historical neighbourhoods (left), which is one of the reasons we wanted to start with New West, because it does have historical longterm neighbourhoods," she said. "I know quite a number of people there whose families have been there over 100 years."

Another contributing factor to the disconnect between residents is population growth, according to Hardwick.

"When you've got people living in more and more condos and high-rise apartments, people don't know the people on their floor, let alone in their building," she noted.

When it comes to privacy, Hardwick said her company has a strict vetting process, with all personal information kept confidential. Understanding that some may not feel comfortable with providing an address to avoid target advertisements, she said PlaceSpeak is no such platform.

Neighbourhoods is set to launch in other communities across Canada over the next few weeks. That all depends, though, on which fit the criteria. A neighbourhood should be no more than 1,000 households, Hardwick said.

"If you get too big, then it's not going to have that neighbourhood feel."

To register, visit www.placespeak.com. PlaceSpeak was developed with support from the National Research Council of Canada, and was adopted by the City of New Westminster in 2012.