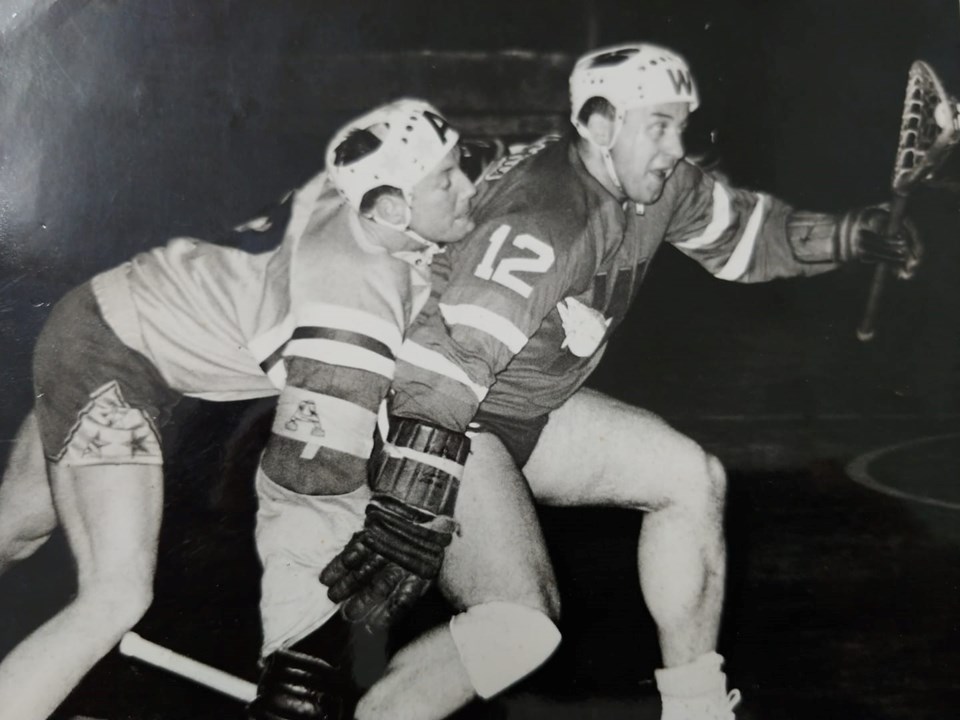 Ron Loftus was part of New Westminster Salmonbellies' teams that won Mann Cups in 1962 and 1965.Contributed

A man who made a lasting impact in New Westminster recently passed away.

Ron Loftus, founder of the Royal City Record, passed away May 4. Family and friends are gathering this weekend to celebrate the life of a man whose accomplishments include founding the community newspaper.

Loftus, who had worked as a sport reporter at The Columbian newspaper and went on to work as a sports editor at the Vancouver Sun, but felt the city needed a local newspaper. On Oct. 1, 1981, he started the Royal City Record.

“He always was interested in the local news and didn’t feel like, after the Columbian’s demise, there was anybody that was covering local news. He saw a void and decided to fill it,” recalled longtime friend Fred Sparkes. “He was proud of starting the paper. He was a real newspaper man. He enjoyed writing. He was a good writer.”

In a 2006 interview with the Record, Loftus joked that he hadn’t considered New Westminster’s many hills when he decided to start the newspaper. Loftus, along with wife Darlene, sons Marty, Jason and Michael, friends Fred and Helen Sparkes, as well as some other friends, had to deliver 22,000 copies of the papers.

"At that point, I thought I was crazy," he told the Record with a laugh.

Loftus was so committed to having a community newspaper in New West that he never took a salary from the paper that he ran for several years. After working at the Royal City Record from 9 a.m. to 5 p.m., he’d go home for supper and a nap, and then work at The Vancouver Sun from 6:30 p.m. until the wee hours of the morning.

Growing up in Sapperton, Loftus was part of the Hume Park Hornets, a group of friends who had known each other since they were kids and played sports together. Members would remain lifelong friends.

“We all grew up in Sapperton. We played sports together. We got together as a ball hockey team to start with, and we just kept that going. We went on vacations together,” Sparkes said. “We stuck together and we still do today.”

In his younger days, Loftus played a number of sports, including football, soccer and lacrosse. (Loftus discussed his life as part of an oral history with the New Westminster Museum and Archives.)

“He was great athlete. He was an underrated athlete, in my opinion,” Sparkes said. “He played high school football at Lester Pearson. He was a running back. He was an excellent soccer player. He was a great lacrosse player.”

Jack Fulton, who managed the New Westminster Senior Salmonbellies, said Loftus was part of a Mann Cup winning teams in 1962 and 1965.

“He was a tough little guy,” he said. “He used to get into lots of scraps with bigger guys than him. He’d just grab them and hang on for dear life.”

“Of course, on the way back everybody had a beer or two, and Pogo, as we called him, would go up and challenge these wrestlers – ‘I’ll throw you guys around.’ They’d say, ‘Get out of here you little twerp.’ He was a character,” Fulton laughed. “He was a really good guy.”

Fulton recalled an incident where Loftus had witnessed a hit-and-run incident in Sapperton.

“He recognized the person who had done the hitting because he was a Sapperton guy,” he said. “He reported him to the police, and they picked him up and he was charged with a DUI.”

When family and friends gather for a memorial service in Loftus’s honour on June 26, there will be no shortage of stories to tell.

“He was a great guy. He would give you the shirt off his back. He was really a good dad,” Sparkes said. “He was just a great guy all around.  We are going to miss him.”