Response to the city’s urban solar garden indicates there’s a “pent-up demand” for renewable energy.
Jun 23, 2018 9:05 AM By: Theresa Mcmanus 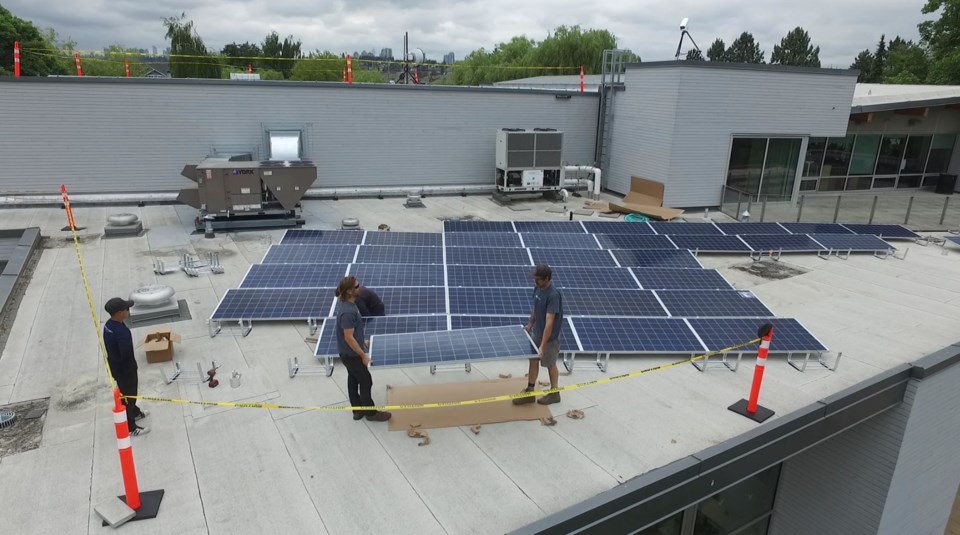 In demand: Installation of a new urban solar garden is underway at the Queensborough Community Centre. Here, the contractor is hard at work assembling the installation, which is expected to be complete by the end of June.Contributed

Installation of the City of New Westminster’s first urban solar garden is now underway at the Queensborough Community Centre and is expected to be complete by the end of the month.

Ryan Coleman, project coordinator of Energy Save New West, said the urban solar garden includes 156 panels, all of which have been purchased.

“We were subscribed within weeks. We were oversubscribed really because we have a wait list,” he said. “I think we have just scratched the surface of interest.”

The city evaluated the potential for a 50 kW array to be installed at city hall, the city’s works yard and Queensborough Community Centre, ultimately selecting the community centre because of the maximized energy production from solar panels, better condition of the existing roof structure, ease of access for public tours and events and improved visibility for the local residents and subscribers.

“It’s got good visibility and traffic. It’s a destination,” Coleman said. “We are very keen on making sure that we’re not just ‘let’s get this thing and it’s generating energy’ – it’s like, how can this be used to engage the public and educate people on the technology.”

A time-lapse video and drone video sessions will document construction and be shown at a ribbon-cutting event this summer.

Following a bidding process that resulted in six proposals being submitted, the city selected Terratek Energy as the contractor to design, install and commission the 50 kW solar photovoltaic array. Since 2005, Terratek has installed more than 300 solar PV systems for residential, commercial and institutional clients including West Coast General Hospital in Port Alberni and Penticton Secondary School.

Norm Connolly, the city’s community energy manager, said panels in the solar garden were snapped up within three weeks.

“I think there was pent-up demand in the community,” he said. “People are interested in renewable energy technologies.”

When the city surveyed the community, Connolly said many residents indicated they wanted to see some type of electrical generation done locally. While hydro projects, wind-generated electricity projects or ground-oriented arrays of solar panels aren’t doable in New West, Connolly said rooftops are a place where the city is able to generate local energy.

“The good news is, there is a bit of a waiting list now, and if our utility commission is cool with this and council approves, we could conceivably go to a second array pretty quickly,” he said.