A Canadian Anglican priest will be lending her voice to a global discussion about the future of the planet. The Reverend Emilie Smith, parish priest of St.
Sep 27, 2019 3:42 PM By: Theresa Mcmanus 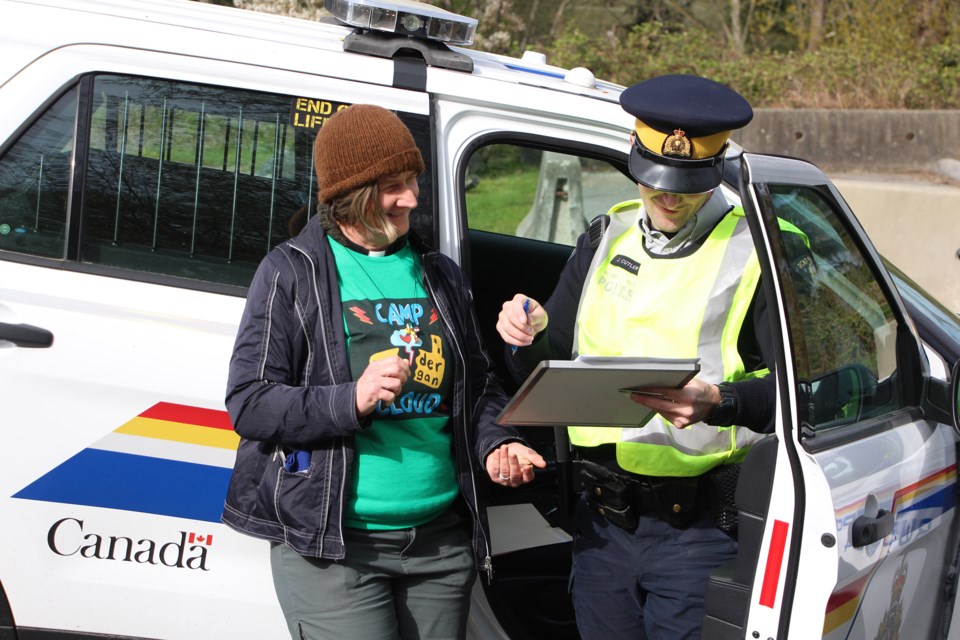 Rev. Emilie Smith, the parish priest at St. Barnabas Anglican Church in New Westminster, speaks to a police officer outside the Westridge Marine terminal after being arrested. Smith has been invited to attend a gathering in Rome called by Pope Francis.

A Canadian Anglican priest will be lending her voice to a global discussion about the future of the planet.

The Reverend Emilie Smith, parish priest of St. Barnabas Church in New Westminster, is travelling to Rome to participate as an observer at the Vatican’s Special Assembly of the Synod of Bishops. The gathering – called New Paths of the Church and for an Integral Ecology – will bring together bishops from the nine countries that are home to parts of the Amazon basin, river and rainforest.

“He (Pope Francis) has called the gathering. It is organized by him, but I am not going to the official gathering because I am not a Catholic bishop of the Amazon,” Smith told the Record. “I’ve been invited as an observer to the parallel activities.”

Smith is thrilled to be attending the gathering and taking part in discussions about how the church can participate in a world campaign to combat climate change and environmental destruction.

“It’s specifically about the Amazon in this case, but it’s really about the world,” she said. “Where I am going to be most of the time is a place called the Common House in Rome. That has been built by supporters of this gathering, and it’s run by Indigenous people of the Amazon. They will be there. We are invited as guests to that location to listen, not to talk our heads off or tell anybody what to do, but to listen and to try and understand how to best come alongside these communities in support. It’s momentous.”

New Paths for the Church and for an Integral Ecology recognizes that the Amazon rainforest is of vital importance to the planet, but a crisis has been triggered by prolonged human intervention. A preparatory document related to the gathering states it’s of “vital importance” for the church to listen to Indigenous peoples and to all the communities living in the Amazonia and to see how they view the future, and to consider how to create a better world.

“I am hoping to bring back a deeper connection with other communities who are working in defense of the land and the water,” she said. “Personally, it’s thrilling. It feels like I have been working on these issues for years in my own study, in my own personal theology. I am really excited about the opportunity to share and to learn. To listen, really.”

Smith, 56, can’t help but wonder what the world will be like in 50 years for her grandchildren.

“We are not going to recycle our way out of this. All those things are great. Everybody is doing their part, but it’s not personal decisions where or there that’s going to change,” she said. “It’s something bigger, but we are all part of it.”

Smith, an Argentine-Canadian, spent many years working with the people of Latin America, especially Guatemala. She was invited to the gathering through her role as co-president of the Oscar Romero International Christian Network in Solidarity with the Peoples’ of Latin America (SICSAL), an international network of 28 countries.

“In the end, I think … what we all have to do is return to a different way of thinking about the
Earth. That’s why I am really excited about going,” she said. “I think that there are ways of understanding and remembering the Earth isn’t a product for our consumption.”

Smith was sentenced to seven days in jail, after being arrested during a multi-faith blockade in April 2018 outside Kinder Morgan’s Westridge marine terminal. She said the destruction of the Earth in places around the world is all related.

“I go in representation of this community and the struggles here,” she said. “I will come back and see what we can cross pollinate to protect our beloved mother.”