Restaurants struggling because of COVID-19 closures and restrictions
Jun 2, 2020 11:54 AM By: Theresa Mcmanus 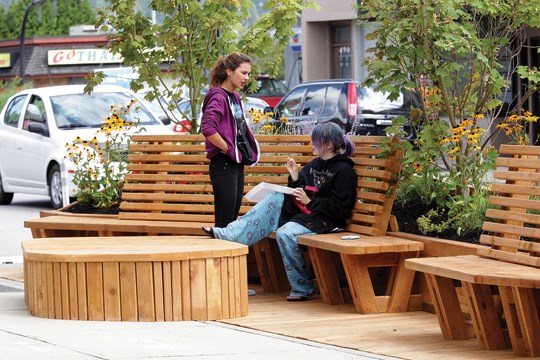 Some passersby enjoy the newly-built parklet in Sapperton.Kevin Hill

New Westminster is paving the way for patios and parklets to be set up in spaces normally used for roads and sidewalks.

In an effort to support businesses ability to recover from the COVID-19 pandemic, the city is amending some of its bylaws to allow for the creation of sidewalk and on-street patios. Because of physical distancing requirements and other health orders, restaurants have less indoor seating.

“The City of New Westminster is committed to maintaining and improving upon a quality, people-centred public realm, as doing so supports vibrant, active and healthy streets, which in turn has a positive impact on local business and the community as a whole,” said a report to council. “As local restaurants and pubs reopen, many will be seeking additional space outdoors to attain as close to their normal occupancy as possible, while complying with public health order protocols. The additional space could take the form of expanded patios on-site/on private property, sidewalk patios or patios located on city roadways.”

Council directed staff to work with the business community to determine appropriate locations for parklets. It also directed staff to proceed with the implementation of parklets in the Uptown and Downtown neighbourhoods, and at least one in the West End, without requiring council endorsement of the locations that have been identified, including sites on Columbia Street, Sixth Street (700 block), Sixth Avenue (500 block) and 12th Street (600 and 800 blocks).

Cote said the city normally takes its time with this type of policy work, rightfully so, but it needs to act fast to support a struggling sector of the economy.

“The faster we are able to move, the better,” he said.

“They don’t believe they will be able to make their rents, their payments, their utilities at 50% capacity. They require about 75% capacity on weekends in order to meet all of those costs. We have to be very careful what we do,” he said. “I do support, where we can, fast-tracking the opening of more space outdoors, especially during the summer period.”

Downtown New West BIA executive director Kendra Johnston said the BIA supports the “incredible work” city staff has undertaken regarding the creation of patios and parklets. She said food and beverage businesses have obviously suffered greatly through the pandemic and will continue to be challenged by restrictions put into place to protect everyone.

Rnold Smith, CEO of the New Westminster Chamber of Commerce, said a poll of local business owners found that only 30% were comfortable returning to restaurants, but that number went up to 45% if they had outside dining available.

“That is why we have been advocating to the city to streamline and think creatively about letting restaurants convert outside spaces for dining,” he said in an email to the Record.

According to Smith, many businesses, including restaurants, are struggling with expected sales decreases of 50% or more due to COVID-19, so anything that can be done to mitigate that loss will be very important if the city wants local, small businesses to survive.

Chris McFadden, managing partner and wine director at Piva Modern Italian, said patio seating isn’t a “deciding factor” for all diners, but it provides an option for local restaurants.

“For the businesses that haven’t been fortunate enough to have a patio because of the limits we’ve had because of sidewalks and walkways, I think it’s tremendous when you see our city wanting to make sure there can be an expansion that helps businesses and puts them back on their feet,” he told the Record.

Lisa Leblanc, the city’s manager of transportation, said the city’s goal is to provide options for those seeking either temporary or permanent spaces.

“We are confident this gives us the ability to approve these things very quickly,” she said.

A May 25 report to council provided an overview of some of the sidewalk and street patio and parklet options being considered by the city. These include: permanent patios on private property that would be used by the business occupying that property; patios for liquor-primary licensed businesses; and permanent sidewalk patios on city property that’s immediately adjacent to the business (table service would be permitted).

* On-street patios (on city property) could be a temporary or permanent use in areas where the sidewalks don’t have enough space in front of (or attached to) a restaurant or pub. This option may allow businesses to have an on-street patio by placing it over existing on-street parking stalls. Table service, and potentially liquor service, would be permitted.

* Parklets (on city property) could be created over on-street parking stalls in commercial areas. These temporary parklets, which would be for public use, would be geared towards supporting nearby food-service establishments.

“We have to hurry. We don’t have a year-round patio season here in Metro Vancouver. It won’t be very helpful if we get these patios up and running for October, simply because it won’t be warm enough and people won’t be able to enjoy it. … It’s already patio season,” said Coun. Nadine Nakagawa. “We really do have to hurry if we want to see this benefit the local businesses that it would be supporting.”