David Sarraf is a land baron, but you wouldn’t know it to see his car. The worn-out 1996 Ford is literally ripped apart inside and stuffed with supplies for cleaning and maintaining the 37 properties – including eight in New Westminster – he owns.
Jan 15, 2014 8:57 AM By: Niki Hope 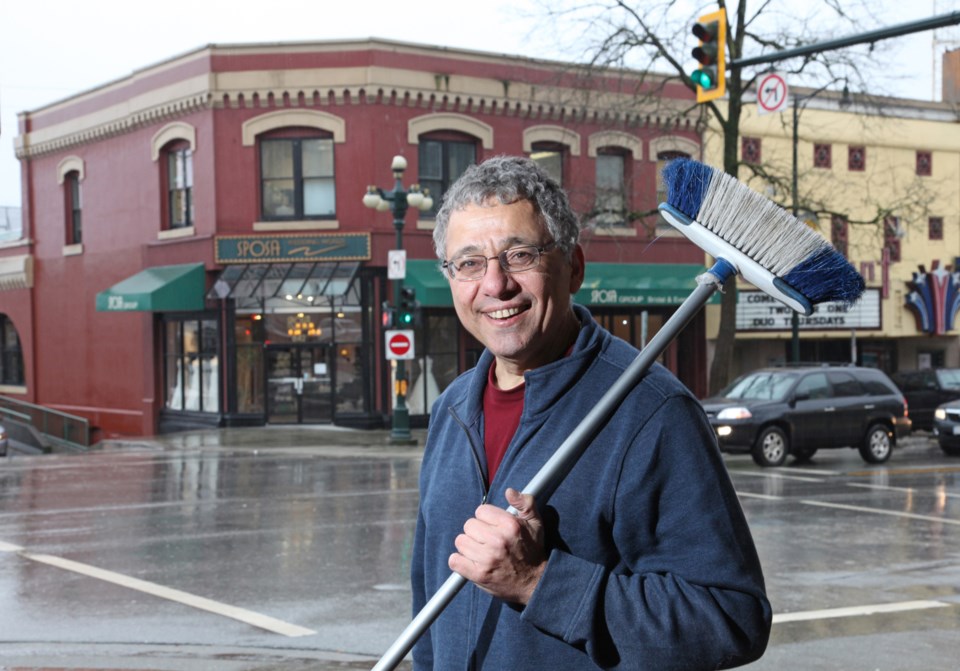 Hands on: David Sarraf started investing in New Westminster commercial properties in 2010. Today he owns eight buildings downtown but says the old ones are expensive to maintain. He’d like the city to offset those costs – and make it easier to keep old buildings – with tax incentives.Jason Lang/THE RECORD

David Sarraf is a land baron, but you wouldn’t know it to see his car.
The worn-out 1996 Ford is literally ripped apart inside and stuffed with supplies for cleaning and maintaining the 37 properties – including eight in New Westminster – he owns. The entire back seat of the car is gutted and full of boxes, extension cords, tools, sealants, paint. The car is clearly just for work.
When I suggest he must have another car for driving outside of work, Sarraf says, “Yes.”
“What kind,” I ask.
“A BMW,” he says, adding, “a 1995.”
I meet with Sarraf on a damp January afternoon in one of the office buildings he owns on Columbia Street. The building houses everything from a mortgage company to a yoga studio to a school called the Institute for Hypnotherapy.
On the day we meet, Sarraf is there to show one of the spaces to a prospective tenant. The old building is beautifully kept, with exposed brick (which Sarraf did when he bought the old building) and clean, fresh paint.
Sarraf proudly shows how he’s managed to upgrade the old building without compromising the character.
“This is the beauty,” he says as he glides his hand across the warm brick.
“You have to keep the new with the old, … it doesn’t have to be fancy, just simple, simple, cause this is me. I’m simple. I don’t like fancy stuff, and I don’t like to throw stuff away.”


‘I fell in love’
Sarraf started investing in New West in 2010. At the time the Dunbar businessman, who formerly owned a chain of kitchen stores that is now down to one location, didn’t even know how to get to the city.
“I didn’t know where it was. It took me four or five times to figure out how to get here. I always got lost. I still do, because it’s my character,” he laughs.
A real estate agent told him about a property on Columbia Street.
“The guy showed me, and I fell in love with the street and the city people,” he says.
When Sarraf was looking into buying the properties, he called city hall with a few questions. To his surprise, he got a quick call back.
“I remember Lisa Spitale at that time she was the head planner, now she is the city manager, so I spoke to her, she called me back on Friday at five o’clock. I couldn’t believe it, somebody from the city calls you at five o’clock.”
They spoke for an hour.
“She told me, ‘You be in my office Tuesday at one o’clock,’” he says. “When I saw the way she reacted, and I see the growth and she showed all me what they are doing and all what the changes are going to be, I thought, ‘Oh this woman, I better follow her.’”
He bought the properties and then went on a spending spree along Columbia Street. His arsenal of properties in the city includes the Sposa wedding world  building, the Paramount Theatre, the building that is kitty-corner to Starbucks, the offices and buildings that include Fresh Slice pizza, the DNA testing site, The British Store building, the cigar shop and more.


Saving heritage
Sarraf is unique not just in that he maintains his buildings largely on his own (his daughter and another staffer do help, and he hires a contractor for larger jobs – though he helps the contractor), but also because the 61-year-old is also keen on keeping heritage stock.
“My key is to keep the buildings the way they are … the more you can, the better,” he says. “New is easy to get, but old you can’t get.”
But maintaining a heritage building can be a headache – and a costly one at that.
And it’s not just building maintenance that’s the big cost – it’s insurance. Sarraf said earthquake insurance on an old building can be upwards of four times the cost of a new building.
And the recent downtown fire didn’t help his already-steep rates. Sarraf’s Sposa building and office building – both located near the fire – were impacted by the blaze that destroyed two New West heritage buildings. The windows on Sarraf’s buildings were blown out, and the fire cost him about $20,000 for his insurance deductible.
Sarraf laments the loss of the old buildings on Columbia Street, saying he doesn’t want to see new ones in their place.
“What do you think will replace it? Nobody is going to put a heritage building (there) – it’s finished. They can’t keep the heritage facade. There’s nothing to keep. So naturally there will be probably a highrise … we know that. Whatever they tell you, I know in a year from now, a big developer will come with big bucks and will build it.”
Sarraf wants the city to do more to help offset those hefty costs for heritage owners, suggesting it provide a tax break for those who keep the precious stock.
“I am now trying to work with the city to push them to reduce the taxes on a heritage building,” Sarraf says.
Asked why he spends so much time and energy maintaining his properties, rather than hiring a property management company, Sarraf says, “I know what management companies do … they don’t look after it like it’s their own. I look after it like it’s my own. It’s my own house.”


Hands-on landlord
“Amazing,” is how Moustafa Alich describes his landlord.
Alich’s company, Guardsmark, a security company, has an office in one of Sarraf’s buildings on Columbia Street.
Alich’s office moved a few years ago from a downtown location with a sweeping harbour view, but Alich says he prefers New West for business because of the city’s proximity to surrounding cities. It makes it easier for people to get to them and vice versa.
Plus, he likes Sarraf.
“I can just call him on the phone and say, ‘Hey, we need this,’” he says.
Asked why he spends so much time and energy maintaining his properties, rather than hiring a property management company, Sarraf says, “I know what management companies do ... they don’t look after it like it’s their own. I look after it like it’s my own. It’s my own house.”
Sarraf recently bought the building that is on the corner of Columbia and Sixth Street. The new building includes a doggie daycare company, owned by Dawn Taylor.
After the October fire, there were a few business owners clamoring to get into the spot, but Sarraf said he had promised it to Taylor, and he never wavered.
“She came to me, and I had so many people after the fire that wanted to take it, (but) because I promised her I would give it to her, I didn’t change,” he says. “Some people don’t like doggie daycare, but I don’t mind it because it’s on the side of the building.
“She’s nice, you know. She loves the dogs, and the dogs love her. Everybody has them. My two daughters have dogs, and they love them more than they love me,” he says, smiling.
“Everybody knows her because everybody has dogs. The first time I met her, she comes with her van, she has about seven or eight dogs there, and she says, ‘Here’s all of my dogs, and none of them bark.’ I couldn’t believe it. You know seven or eight dogs, and nobody barks, I said ‘What did you do to them?’”
As for Sarraf, he says he works for his tenants.
“I care for my tenants. I want them to be happy,” he says.