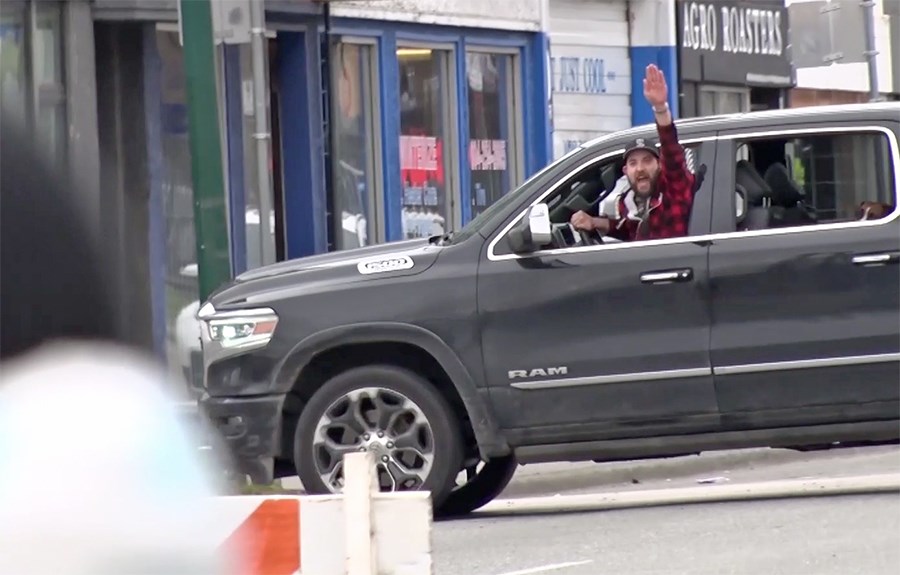 The man who flashed a Nazi salute at a group of Indigenous youth involved in a protest in Vancouver earlier this week has been identified as a local contractor.

The New Westminster resident says his use of the offensive gesture was a “knee-jerk reaction” to what he describes as a “traffic tie-up.”

The incident was captured on film by Vancouver Is Awesome at roughly 8:30 a.m. on Wednesday, March 3, when protestors had blocked the intersection to vehicle traffic.

The protestors were calling for the release of Indigenous elder Stacy Gallagher who was sentenced to 90 days in jail for violating an injunction that bars people from protests at Trans Mountain sites in Burnaby.

In the clip, the man in question can be seen driving through the intersection of Clark and Hastings uttering profanities, flashing his middle finger out the window of his vehicle, then making three consecutive “Sieg Heil” motions - it is the gesture that the Nazis used at rallies in Germany.

The man in the video is an employee of a contracting company whose current client list includes Trans Mountain, the crown corporation working on the pipeline expansion in Burnaby.

Trans Mountain tells us that the company is indeed a contractor of theirs, but that the man "has not been on a... worksite for Trans Mountain."

In an emailed statement sent to V.I.A., the president of the company says they were “appalled” and “extremely disappointed” when they saw the video and that the employee is now on personal leave. They tell us they “want to investigate [the incident] thoroughly and weigh all options prior to making any final decision regarding actions to be taken.”

The man himself also provided V.I.A. with an emailed response to inquiries about the incident. In his statement, he denies being a member of any white nationalist organization such as the Proud Boys.

Explaining why he threw a Nazi salute, he says: “I lost my mind in the moment and did what I did in a knee-jerk, stupid way to express my frustration over the traffic tie up.”

He says he regrets what he did “more than anyone can ever know,” does not explain why his immediate instinct was to turn to racism, but that he “will work hard on myself to become a better person,” partially by taking counselling.

Michelle Silongan is a lawyer at ST Law and a steering committee member of the Law Union of BC, who provided legal support to the arrestees and organizers. She wasn’t surprised to see the man acting the way he did.

In an email, Silongan tells V.I.A. that “White supremacy is endemic to the response of counterprotesters and institutions towards Indigenous land defenders and people of colour. A white man giving a Nazi salute is just an overt example of this, and a form of violence which is already commonplace for my clients.”

Further, she notes that “Unless we name and confront systemic racism in all its forms, overt and covert, reconciliation and racial justice will continue to be unrealized.”

The Vancouver Police Department arrested four protesters at the scene on Wednesday evening. They have not yet confirmed if the man is the subject of any investigation connected to the incident.