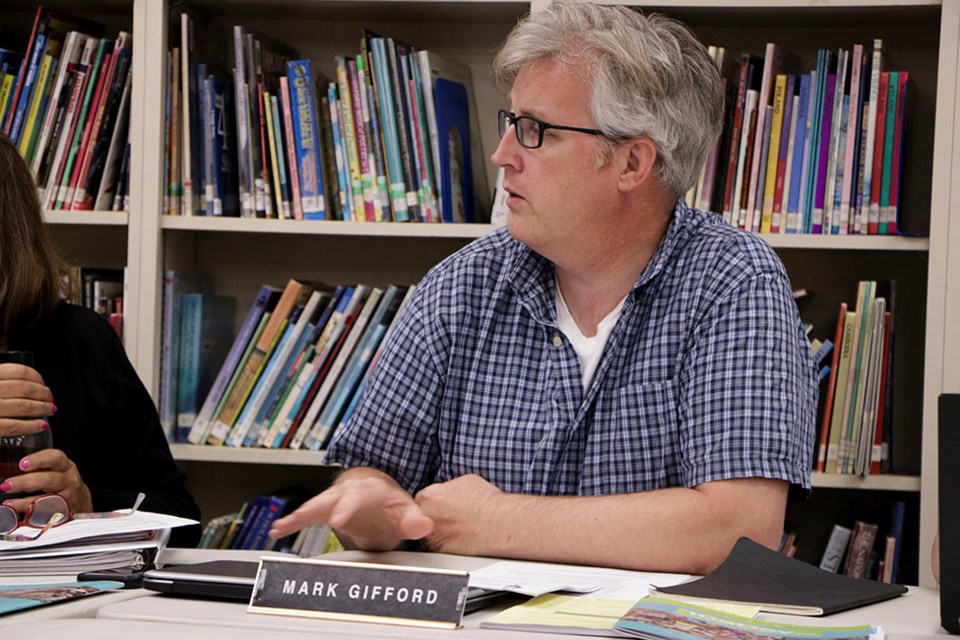 Mark Gifford school board – Trustee Mark Gifford with the New Westminster school board introduced a motion in committee to recommend the board endorse a $10-a-day child care plan. DUSTIN GODFREY PHOTO

The New Westminster school board could become the 32nd in the province to endorse universal $10-a-day child care.

Marcel Marsolais, president of CUPE local 409 representing support staff at the school district, offered his own support for the campaign at the meeting. He cited the experience of some of the members of that union, who have accessed one of the 50 universal child care prototype sites selected by the B.C. government.

Those sites offer child care for $10 a day per child as a pilot project, testing the waters for expanding such a service throughout the province. No New Westminster child care sites were selected for that pilot, but four sites in Burnaby, four in Coquitlam and six in Surrey were selected.

“Some of your employees have already had their kids involved in some of these pilot projects and have noticed a significant difference in their life. Life changing. Absolutely life changing,” Marsolais told the committee.

“It helps them do those things that they weren’t able to do before. So I would urge the board to look seriously at providing these spaces on our land.”

Trustee Mark Gifford, who brought forward the motion to recommend school board endorse the campaign, said from what he’s heard the prototype sites have had a “night and day” improvement on the quality of life.

Gregson noted the experience in Quebec, where she says affordable child care “more than pays for itself” with the number of single-parent families on income assistance dropping by 55 per cent between 1996 and 2008.

She also cited a 2017 study prepared for the Early Childhood Educators of B.C., which anticipated a GDP growth of two per cent and employment increasing by 2.8 per cent.

If the school board supports the campaign, it would join 31 other B.C. school districts and 56 municipalities, including the City of New Westminster.

658
New West sees big jump in COVID-19 cases
330
A cafe helping people in need says pay what you can
246
Opinion: Now NIMBYs are whining about shadows from new housing
216
Filming in New West: A bright spot in a challenging year
174
New West athlete remembered for her zest for life