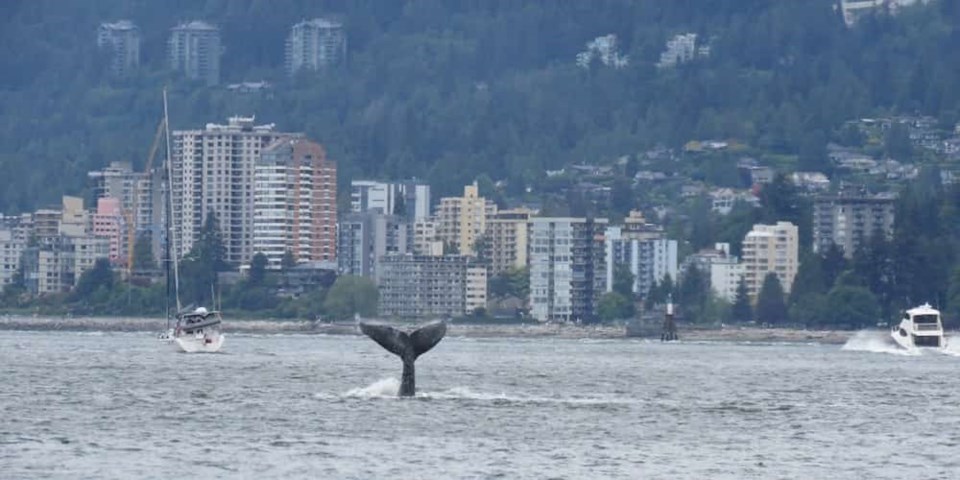 On Friday, May 22, Port of Vancouver tweeted an image of the whale's tail sticking out of Vancouver waters. They add that people should report sightings of whales in local waters by using the WhaleReport app. Alternatively, you can call 1.866.I SAW ONE (1.866.472.9663) to report the sighting.

By reporting your cetacean (whale, dolphin, and porpoise) and sea turtle sightings, you are directly contributing to conservation-based research. Sightings are analyzed to obtain valuable information about species distribution patterns and aid in future recovery and management plans for species at risk.

A couple of videos showed whales swimming in the sunshine just outside of Deep Cove in North Vancouver this week. North Vancouver resident Nelson Phillips recorded the videos from his parent's house, which is located up Indian River Drive in North Vancouver. He adds that the area is just off Raccoon Island, and that you can see Twin Islands in the background to the left in the video.

Prior to that, a video captured orcas swimming in the sunshine near Lighthouse Park in Vancouver. In the recording, a boat is seen off in the distance at Juniper Point and an orca surfaces for air. A short while later, a second whale surfaces, and it looks like a delicate spray of mist comes out of its blowhole. View it HERE.

Thinking of going whale watching on the water?

Be Whale Wise advises that, "Boats must stay 400 metres from orcas or killer whales in Southern Resident Killer Whales’ critical habitat and in Canadian waters in the Pacific Ocean east of Vancouver Island and south of Campbell River." In addition, "Boats must stay 200 metres from all killer whales in other Canadian Pacific waters and from all whales, dolphins or porpoises if they are resting or with a calf."

Be Whale Wise adds that boaters should use, "the Whale Warning Flag to warn fellow boaters to the presence of whales and be aware of the flag when you’re cruising the area," and also to, "Go slow (<7knots) within 1,000 metres, or a half mile, of killer whales."

For more information on Be Whale Wise guidelines, go HERE.

Here are all the decadent poutines you can try in Metro Vancouver during La Poutine Week
Jan 27, 2021 10:48 AM

It's time to nominate B.C.'s champions of multiculturalism and anti-racism
Jan 27, 2021 8:30 AM
Comments

1347
New Westminster neighbourhood aims to make Lunar New Year magical in 2021
294
Transit police seeking man who allegedly pushed woman to the ground unprovoked at SkyTrain station
228
UPDATE: Here's where you could be able to buy cannabis in New West
161
OPINION: Here's how those millionaires managed to skip the vaccination line
150
ICBC launches online tool to calculate savings with new program