A plan to better balance enrolment at the two schools would not affect any families currently enrolled at either school, the district says
Nov 20, 2020 12:08 PM By: Julie Maclellan 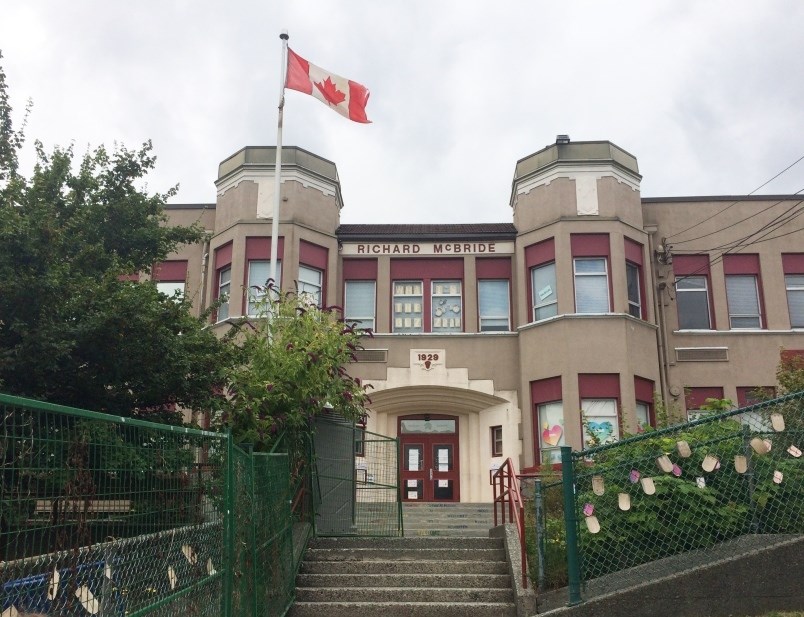 The New Westminster school district is eyeing plans to make better use of space by shifting the catchment boundaries for its two east-end schools.

With 117 students right now, Howay has been struggling to keep enrolment up and has been operating at about 70% capacity. The opposite is true at Richard McBride, where the current enrolment of 419 sees it sitting at about 90% capacity – a number that’s only projected to grow.

Superintendent Karim Hachlaf brought the issue to the school board’s operations committee meeting on Nov. 17. He noted the school enrolment question has been on the district’s mind since it completed a long-range facilities review in 2018. That review projected continued increased enrolment across the district, with the largest increases at the elementary school level.

Last spring, the district engaged consultants to help with enrolment forecasting and demographic analysis for Howay and McBride. They studied three potential options to make better use of school space – and one of those emerged the clear winner for the school district.

That plan would see the western edge of the McBride catchment – the neighbourhood bounded by Cumberland Street, McBride Boulevard, East Eighth Avenue and Blackberry Drive – become part of the Howay catchment instead. Under that plan, McBride’s enrolment is projected to see a gradual decline to about 403 students by 2034, while Howay’s would increase to 150 by that same year.

Hachlaf noted that, for long-term projections, the goal is to keep school capacity at around 80% to allow room for growth, and this plan would achieve that for both schools.

The consultants also looked at two other options.

But Hachlaf said neither of those plans showed enrolment projections that would achieve the district’s goals.

Any potential boundary changes will only come after consultation with the community. The district is currently eyeing a plan that will see information posted and shared, with opportunities for online feedback, in December. Virtual consultation events with staff and the community would then be held in January and February.

Hachlaf said it’s important for families to know that no one currently enrolled in one of the two schools would be affected by the change.

“We would not be displacing students that are already attending the school,” he said, adding that would also be true of siblings of those students.

Trustee Anita Ansari said it’s critical for the district to figure out how to even out enrolment, “so that we don’t have schools that are losing teachers because of lack of students at the same time we’re overfilling other schools.”

She stressed no families of current students would be moved to a new school.

“No family that has kids in a school will be locked out of that school,” she said. “If you have a sibling and you suddenly end up on the wrong side of the catchment, then the sibling will go to the school that you originally were aligned to. We don’t want to displace families, but we also want to recognize that we should not have unused school spaces going forward.”

Trustee Dee Beattie raised the issue of growth in Sapperton, noting that a number of new developments – including the Brewery District, 100 Braid Street and Sapperton Green – are going to bring extra people into the neighbourhood.

Hachlaf said the district’s consultants will continue to look at future development to ensure they’re working with the most current information. But he noted that, if more growth comes to Sapperton, freeing up space at Richard McBride would work to the district’s advantage.

Trustee Maya Russell questioned whether consideration had been given to moving the district’s Montessori program from Richard McBride to Howay, rather than shifting catchment boundaries.

But Hachlaf said the district’s analysis showed the “overwhelming majority” of Montessori program students actually live in the McBride catchment, and the district felt it might lose those students if it moved the program elsewhere.