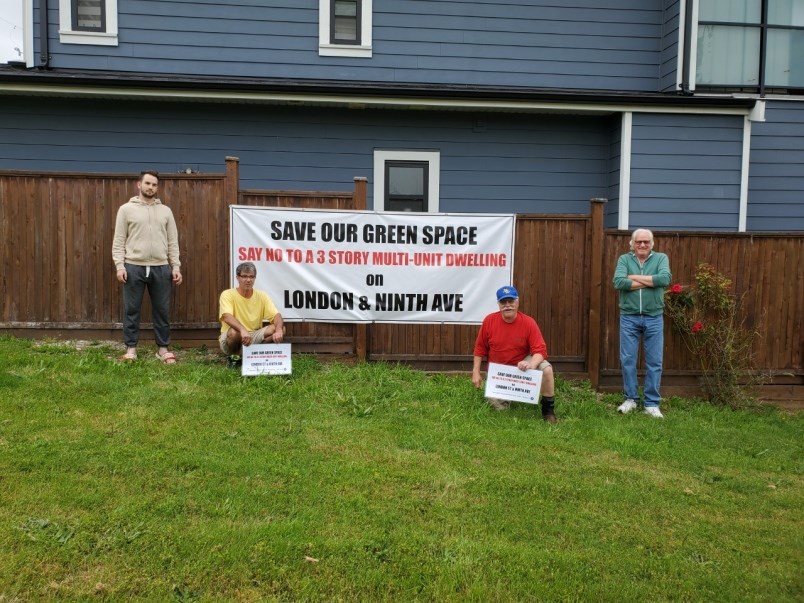 Some Connaught Heights neighbours voiced concerns about a project in their neighbourhood that's now in jeopardy because of soaring construction costs.

The soaring price of wood is one of the reasons city staff are recommending the City of New Westminster not move forward with an affordable housing project in the Connaught Heights neighbourhood at this time.

In a July 12 report to council, staff sought council’s direction on the Connaught Heights small sites affordable housing project that had been proposed for 2035 London St. Staff are recommending the city  not proceed with the project at this time due to a couple of factors, including increased construction costs.

“Most significantly, construction costs, particularly the cost of wood, have quadrupled in the last 12 months,” said the report to council. “This has a high impact on the financial viability of small wood-frame projects such as this one, which have a fewer number of units over which to spread the increased costs.”

Increasing the number of units and overall massing of the project would reduce its objective of providing a building design that’s sympathetic with the existing neighbourhood, said the report.

Staff also noted the expedited timeline for consideration of amendments to the official community plan and zoning byalw by council, which is required in order to seek funding from senior governments, is also problematic.

“To secure funding from senior governments, it’s expected the city would need to hold a public hearing in the spring of 2022. Meeting this would require significant staff resources, more than originally anticipated given the effort to resolve the issues regarding 2038 Ninth Ave. (e.g. Crown land grant),” said the report. “The top proponent has also shared similar concerns and has chosen to withdraw their submission.”

Although staff is recommending the city not proceed with the project at this time, staff would continue to monitor the situation with the intent of identifying new opportunities to relaunch this project in the future. In addition to identifying new opportunities, such as new funding programs, staff will monitor changing circumstances, such as reductions in construction costs.

“There are a number of other affordable housing opportunities currently under exploration in the city, and delaying this project at this time would allow staff resources to be focused on these, which: already include a partnership with senior government; meet an immediate need by providing emergency shelter beds or supportive housing units; and deliver a higher number of units,” said the report.

Staff would continue to monitor the situation with the intention of identifying new funding programs and changing circumstances, such as a decrease in construction costs, that may allow this project to be relaunched in the future.

In October 2019, council endorsed the use of the city-owned properties at 2035 London St. and 2038 Ninth Ave. in the Connaught Heights neighbourhood, as well as two site in Queensborough, for the development of small-sites affordable housing projects. After issuing a request for proposals in January 2020, the city received seven proposals for the Connaught Heights site.

Some Connaught Heights residents expressed concern about density and traffic related to the proposal. They also said they’d like to see the site, which was once home to a small community centre, to be retained as greenspace.

In October 2020, the city became aware of a Crown land grand on the property on Ninth Avenue, which restricts its use for parks and recreation purposes. As a result, council directed staff to no longer include 2038 Ninth Avenue in the project and later invited all of the proponents that submitted proposals through the original request for proposals process to submit a new proposal for the site on London Street.