Got an idea for the Richard McBride school renaming? You'll have a chance to share it soon

New Westminster residents will have a chance to share their ideas about the renaming of Richard McBride Elementary School in the new year.
Nov 26, 2020 12:08 PM By: Julie Maclellan 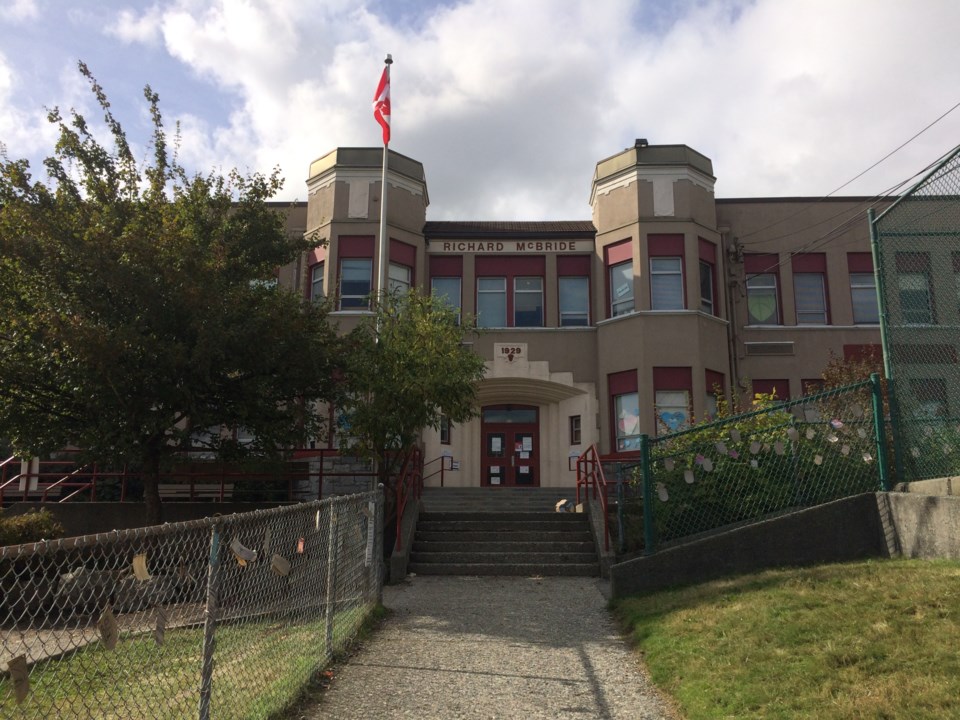 Richard McBride Elementary School will get a new name to go along with a new school building. The school district is launching a public consultation process on the school renaming.Record files

New Westminster residents will have a chance to share their ideas about the renaming of Richard McBride Elementary School in the new year.

A district renaming committee – which includes staff, union reps, students, community members, the district aboriginal coordinator and others – met for the first time on Nov. 5 to lay the groundwork for a community consultation process.

McBride’s parent advisory council brought the idea of the renaming to the school district in June, expressing their concerns over having a school named after someone with McBride’s past. McBride was the 16th premier of British Columbia, from 1903 to 1915. He held publicly expressed views against Asian and Indigenous people and against women’s suffrage, and throughout his time in office he oversaw legislation reflecting those views.

Associate superintendent Maryam Naser, who is part of the renaming committee, said committee members want to make sure they consult with the entire New Westminster community, not just Sapperton residents, about the name change.

Naser noted the committee has also expressed a desire to hear from communities that may have been harmed by McBride, and it has already reached out to Chief Rhonda Larrabee of the Qayqayt First Nation for input.

The committee has also set out a timeline for community consultation (see details below) that would open up a name submission window in January and February 2021. The committee will review name submissions and do further consultation, as needed, in March and April, with a goal of bringing a final report – including a shortlist of potential names – to the school board’s operations committee meeting on May 11, 2021.

A final decision on the new school name will be made by the school board in a closed meeting and announced at a public meeting.

Trustee Maya Russell suggested the committee should consider broadening its outreach to other Halkomelem-speaking Indigenous nations, along with the Qayqayt.

“If there was interest in potentially an Indigenous name, I think we would need to put some resources into working with a native speaker and a linguist,” she said.

Naser agreed, noting the possibility of an Indigenous name is one of the alternatives that has been discussed. So far, she said, the committee has agreed to keep the possibilities for name suggestions as broad as possible to see what ideas come in.

She said the committee wants to ensure the process is as inclusive as possible and that it acknowledges the harm that was done by McBride in the past to pave the way for reconciliation.

Trustee Danielle Connelly said it’s “exciting” that there are three students on the committee and emphasized the importance of the work it’s undertaking.

“It’s certainly a challenging time to be doing this, but it’s exciting to see where this work takes us and what we all gain from it,” she said.

Dec. 10: Renaming committee meets to finalize background information about the school renaming, a process for name submission (including guiding questions) and engagement tools (such as newspaper advertising, school newsletters and the school district website).

March 2021: Committee meets to review name submissions, consults with stakeholders as necessary and creates a draft report, including a shortlist of names.

April 2021: Committee meets to review its draft report and shortlist and to prepare a presentation for the school board.

May 11, 2021: Committee presents final report to the school board at its operations committee meeting.