The Halq’eméylem word for “sturgeon" was the final choice of a New Westminster school district renaming committee following months of consultation
May 25, 2021 7:49 PM By: Julie MacLellan 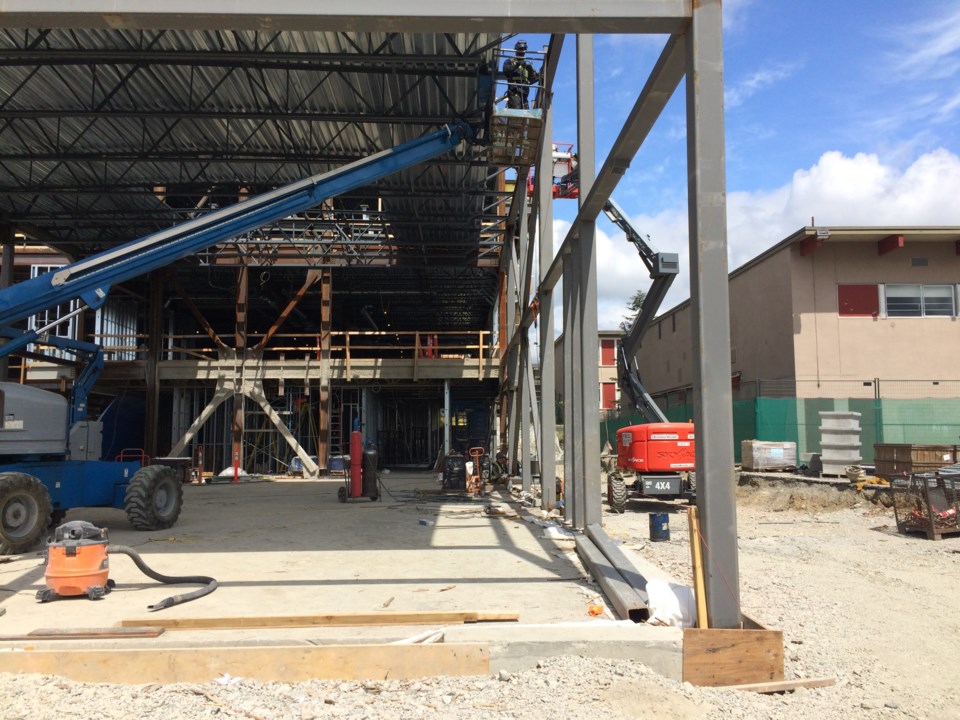 The replacement for Richard McBride Elementary School (seen here under construction earlier this month) will be called Skwo:wech Elementary, after the Halq’eméylem word for sturgeon.Julie MacLellan

“Skwo:wech,” the Halq’eméylem word for “sturgeon,” was the final choice of the committee tasked with renaming the school, in preparation for the opening of a replacement for the existing 1929 school building.

The decision comes nearly a year after the school’s parent advisory council approached the school district about changing the school’s name. They asked for a new name to recognize the fact that the anti-Indigenous and anti-Asian views espoused by McBride during his time as premier of B.C. (1903 to 1915) don’t align with the school district’s current values.

Since then, the renaming committee has steered a public consultation and study process that included seeking input from the community at large, from students and staff, and from those communities who were harmed by McBride’s policies.

A total of 276 name suggestions were submitted through the process, and associate superintendent Maryam Naser noted that four main themes emerged through suggestions from the community: a sense of community or neighbourhood; values (such as peace, respect, welcoming, kindness); distinguishing characteristics of the area (such as river, viewpoint, salmon, hilltop); and Indigenous names, representing values and history.

In the end, the committee arrived at four shortlisted names based on its consultation with Qayqayt First Nation Chief Rhonda Larrabee and other Indigenous knowledge-keepers. The other three were Q'ép, a Halq’eméylem word that means “gather together”; Skaiametl, the Halq'eméylem name used to describe the settlement now known as New Westminster; and Kwiyeqel, meaning “to climb a hill.”

“Naming the new school with an Indigenous name shows that School District 40 is committed to reconciliation and is willing to learn more about our culture,” Larrabee said. “The community in New Westminster has been willing to listen to and learn about Indigenous culture and our history. … I believe the name will be welcomed.”

For Mark Gifford, the school board trustee who co-chaired the renaming committee, the past several months have been worth the effort.

“It was really important and a thrill for the committee to be able to both shortlist a set of Indigenous place names … and then select one of those that I think is just going to speak on a whole number of levels to the school community, to New West, and to the relationship we have with Qayqayt,” he said in an interview with the Record.

He noted that, once the shortlist was set, Skwo:wech was the unanimous choice of all the members of the committee.

“That’s what stood out. It just seemed to resonate with everyone, and that’s great,” he said.

The committee cited a number of reasons for choosing Skwo:wech, including its ties to the Fraser River, which has always been central to New Westminster’s history, and the historical importance of the primary food source for Indigenous communities on the river. The long-lived sturgeon also figures largely in the myths and stories of Coast Salish Peoples.

Gifford said the renaming committee learned a great deal about Indigenous languages during its work with local language keepers. Locally, Indigenous people would have spoken both Downriver (Hǝn̓q̓ǝmin̓ǝm̓) and Upriver (Halq'eméylem) dialects.

Though the inhabitants of this area would have spoken primarily the Downriver dialect, the personal connections for Larrabee are to the Upriver dialect. Her grandparents, George Joseph and Ida Charlie, were the last fluent Indigenous language speakers of the Qayqayt First Nation.

“Having the name of the new school in Halq'eméylem is an extra-special name for me,” she told trustees at the May 25 meeting.

Larrabee’s grandfather, great-grandparents and a great-aunt and great-uncle are buried at St. Peter’s Cemetery – just a couple of blocks away from the school – in unmarked graves labelled “For Indians Only.”

Gifford noted the many layers of history and connection involved in the name transition from Richard McBride to the Halq'eméylem word Skwo:wech. Larrabee’s grandfather and McBride himself were contemporaries, he pointed out.

“It’s a renaming process to honour language and story and connection to a family that’s been here since time immemorial, a nation that’s been here since time immemorial, whose last language speakers were peers of McBride – who spent much of his career working hard to eliminate and eradicate any connection First Nations had to their culture, as well as doing harm to non-white communities through exclusionary policies and legislation and actions,” Gifford pointed out.

And, as nature would have it, there are sturgeon in the river even today who were themselves alive in McBride’s time.

“There’s sturgeon in the river right now that were also peers of McBride and George Joseph. The sturgeon have outlasted all of that,” Gifford said. “Their longevity and resilience as a species in the river is another place of learning for students, for staff, for the district going forward.”

For Larrabee, the new school name highlights her own people’s longstanding relationship with the natural world around them.

“The connection to the land, the forests, rivers, ocean, plants, animals and sea life that sustained us for thousands of years is an important lesson, especially for young students,” she said. “The naming of the new school will spark a greater interest in learning about Indigenous cultures.”

Speaking to the board at the May 25 meeting, Larrabee stressed the importance of the sturgeon to her people.

“They’re part of our heritage, part of our lost heritage, again. We’ve lost so much, and to have the name brought forward, it will teach the children about resilience and a bit about the history of our people," she said.

Kathleen Chad, principal of the current Richard McBride Elementary School, shared her gratitude for the renaming process and the learning that came along with it.

“Skwo:wech is a name that is strong; it’s inspiring; it’s majestic for our new school, and it’s a name that I know we will all feel great pride in for generations to come," she said.

“I am now very grateful and honoured to be able to say, I am the proud principal of Skwo:wech Elementary.”

Trustees voted unanimously in favour of the name change.

NOTE: This story was updated at 8:15 a.m. May 27 with a new pronunciation guide from Chief Rhonda Larrabee.