Free Remembrance Day transit for vets, others in public service

Free rides to will be offered to vets, current members of the Canadian Armed Forces, police officers, firefighters, coast guard officers, BC Ambulance paramedics and Department of Fisheries and Oceans officers
Nov 8, 2019 8:33 AM By: Staff Writer 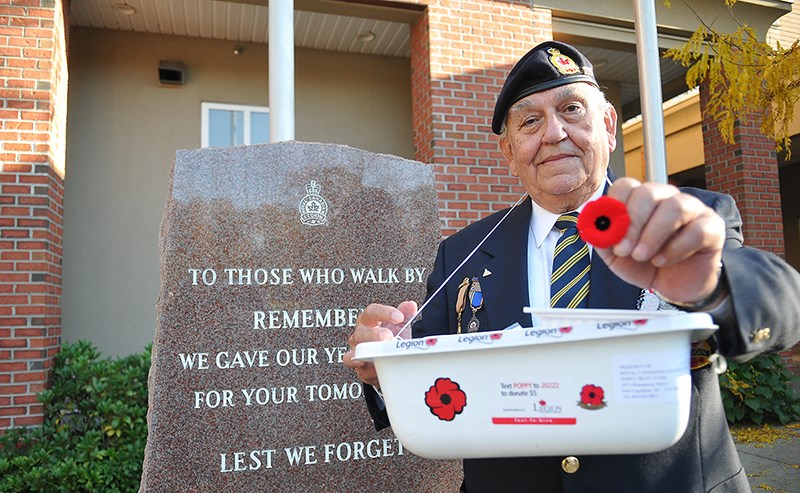 TransLink has teamed up with the Royal Canadian Legion to offer free transit to veterans on Remembrance Day and will hand out poppies at five major transit hubs across the Lower Mainland.

Beyond veterans, TransLink will offer free Remembrance Day rides to current members of the Canadian Armed Forces, police officers, firefighters, coast guard officers, BC Ambulance paramedics and Department of Fisheries and Oceans officers. The transit authority is asking those who qualify to bring along their badge, military identification or record of service.

Members of the Royal Canadian Legion will be giving out poppies by donation at Lougheed Town Centre Station in Burnaby as well as Waterfront Station, Commercial-Broadway Station, Surrey Central Station and Broadway-City Hall Station.

“The funds raised by the poppy campaign enable us to fulfill our mission within our communities and ensures our Veterans, Members of the Canadian Armed Forces, RCMP and their families get the support they deserve,” said Valerie MacGregor of the Royal Canadian Legion B.C. branch in a press release.

Monday, Nov. 11, Remembrance Day ceremonies will be held across the Lower Mainland. If you plan to take transit, one of the more accessible ceremonies in the Tri-Cities is the Port Moody memorial celebration, which will be held starting at 125 Kyle St. at 10:30 a.m.

If you don’t make it to a ceremony and find yourself on transit at 11 a.m. Sunday, TransLink asks riders and staff to observe a moment of silence.

Here are details of all four Tri-City ceremonies:

• Coquitlam: Blue Mountain Park (975 King Albert Ave. at Veterans Way). Legion Branch 63 members host a service at Como Lake middle school (1121 King Albert Ave.) at 9:45 a.m. before the 10:30 a.m. parade to the cenotaph. Grandchildren and great-grandchildren of veterans can march. After the service, a lunch will be served at the Legion (1025 Ridgeway Ave.) with SFU’s Robert Malcolm Memorial Pipe Band and the Naval Veterans Band performing;

• Port Coquitlam: Veterans Park (2580 Shaughnessy St.). A service is at 9:30 a.m. at the Port Coquitlam community centre (2150 Wilson Ave.). Afterwards, veterans and Legion Branch 133 members will parade down Wilson Avenue to Shaughnessy Street for the cenotaph service at Veterans Park. Following that service, the Legion will host an open house at 12:30 p.m. at the branch (2675 Shaughnessy St.) and there will be entertainment including a ringing of the bells for the 75th anniversary year of D-Day at 4:40 p.m.;

• and Belcarra Regional Park (2375 Bedwell Bay Rd.). The Port Moody Power and Sail Squadron hosts a service at the dock with squadron members and dignitaries laying wreaths in the ocean. There will be an air raid siren, historical broadcasts and poem readings. Chili and refreshments will be served for a $5 donation at the picnic shelters afterwards.

2480
Luxurious residences are setting a new standard of living in Langley
310
New West now grappling with second big COVID-19 outbreak
251
Opinion: This protest in front of NWSS against an affordable housing project is ridiculous
219
New West rapid access clinic opens as 'safe way to get sober'
204
UPDATE: Here's where you could be able to buy cannabis in New West