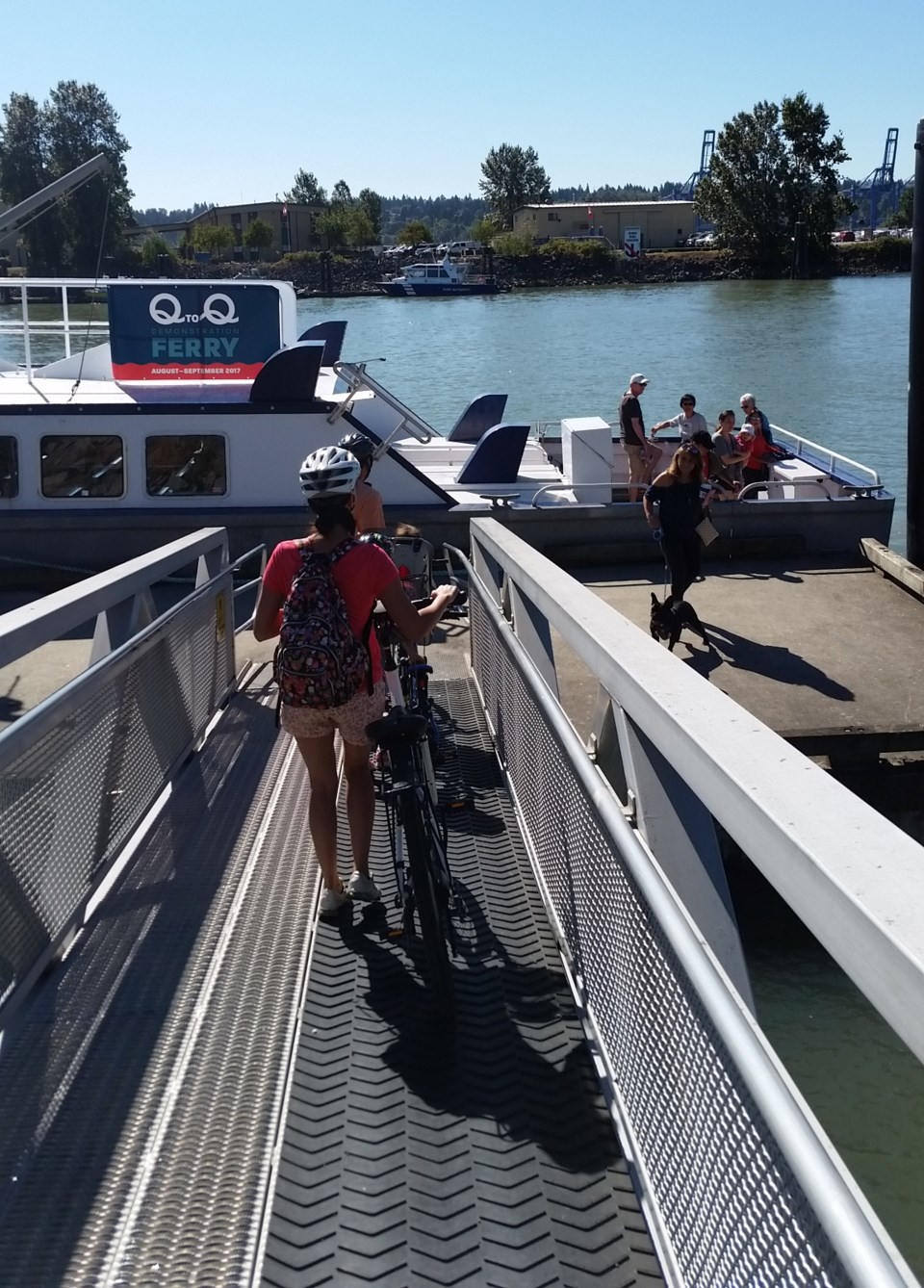 The ramp at the Queensborough end of the Q2Q demonstration service, as well as at the downtown dock, would have to be redone to make a longer-term or permanent service a reality. The ferry would also have to be customized to permit wheelchair access.City of New Westminster
A permanent, or even a one-year trial, of a Quayside to Queensborough ferry service would be fully accessible, say City of New Westminster officials, even though the current demonstration service isn’t.
The city has been taking a beating on social media from advocates for people with disabilities since it introduced the two-month Q2Q demonstration service because the docks and the ferry can’t handle motorized wheelchairs and scooters.
One blogger, identified as G. Peters, called the ferry an “exciting new service designed to exclude, marginalize and discriminate against disabled people.”
The writer said any excuses about the tide and temporariness of the service from the city were unacceptable, and wheelchair and scooter users needed to be involved in the process from the start.
Coun. Patrick Johnstone said since the city doesn’t own a dock or a ferry, it was limited to what could be found in time to conduct a temporary trial this summer. The docks the city was able to secure were not capable of the extended ramps that would be required to lessen the steepness to accommodate motorized wheelchairs and scooters. The ferry would also have to be customized.
But if an expected one-year trial, or even a permanent service, is given the green light, it will have to be accessible to all, said Johnstone.
He pointed out the ramp the city had built for the downtown dock, which is squeezed in between the Samson V and Riverboat Paddlewheeler Tours in a space owned by the Inn at the Quay, is wider than normal, has a railing on both sides and has a grippy surface. The Port Royal dock is part of a water lot, and extending the dock out into the river would have interfered with the working river, said Johnstone.
“Part of the reason we’re doing this is to shake down these kind of things. I’d much rather go through the demonstration and find out what these issues are so that when we do go into designing a more permanent solution we have a better understanding of what our challenges are. This was definitely one of the biggest challenges we hit on with this demonstration,” said Johnstone.
Mark Allison, the city’s manager of strategic initiatives and sustainability, said the city is already searching for better dock locations.
“Right now, because of the tidal difference on the Fraser River, you can have up to a four-metre difference. So, within the current confines of the dock at the Inn at the Quay, there’s physically no space to have a multiple ramp system that would go down,” said Allison. “Given that our agreement with the Inn at the Quay is to just run the service to the end of September, it would not be possible to put a fully accessible ramp in there for this season.
“We’re thinking that going forward that we would be looking at a location where it would be possible for us to put in a ramp system that would allow us to get the slopes that would accommodate wheelchairs.”
Since the trial was for just 20 days and four evenings, the choice of vessels was limited and the one they found, the MV Hollyburn, requires a step down.
“We carefully chose that name (demonstration service) because we knew there were some issues with it. We didn’t want people to think this was the final service,” said Allison, who noted the ferry is accessible for those with walkers, strollers and canes. “We are doing our best to make the ferry as accessible as possible given the constraints that we have.”