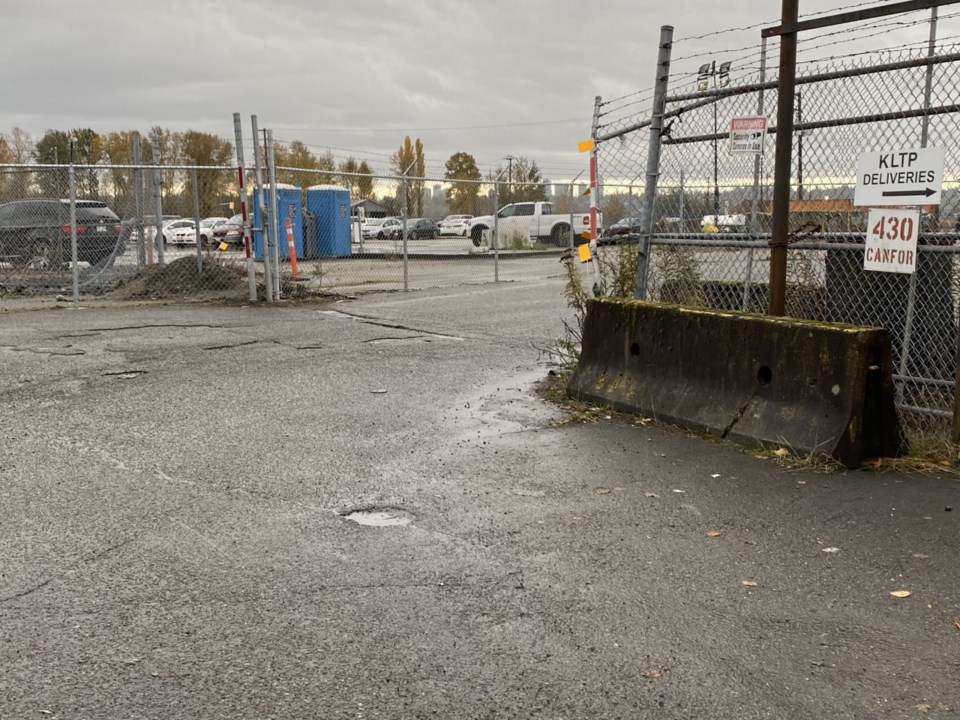 A cyclist was seriously injured after getting hit by a flatbed truck about 5 p.m. on Friday, Oct. 30 in the 400 block of Canfor Avenue.Theresa McManus

A cyclist sustained “significant” injuries after a collision with a flat-bed truck in the Braid industrial area.

New Westminster Police Department spokesperson Sgt. Sanjay Kumar said a Maple Ridge man remains in hospital after the collision, which occurred about 5 p.m. on Friday, Oct. 30 in the 400 block of Canfor Ave.

“There were a couple of witnesses who actually saw what happened. Those statements were taken by our members,” Kumar told the Record Tuesday afternoon. “I can tell you, the cyclist … remains in hospital. Without being too graphic, I will say they are pretty serious injuries.”

The New Westminster Police Department thanked members of the public who provided initial aid to the cyclist after the incident.

“The two witnesses, who were, albeit quite traumatized by seeing what happened, provided great insight into what happened,” Kumar said. “Our collision analyst reconstruction team will be putting this file together.”

Kumar said it will take some time to finalize the collision investigation.

“The CART team (collision analysis reconstruction team) want to be thorough,” he said. “There is a lot of mapping and mathematical components involved to recreate what happened so it’s a clear and accurate picture of exactly what happened that night.”

According to police, the driver remained on scene and was cooperative with police. Alcohol or drugs are not believed to be a factor in this collision.

Anyone who has information about this incident is asked to contact the New Westminster Police Department at 604-525-5411.

Kumar said he was unaware of any formal complaints about safety in that section of Canfor Avenue, but noted there are a lot of trucks coming and going out of that area.

“I can tell you that the Trans Mountain pipeline does have a staging area there. Even when they weren’t there, that’s a really heavy truck area,” he said. “There is lots of trucks coming in and out of that area.”

Some cyclists have expressed concerns about safety at the entrance to 430 Canfor Ave., where trucks coming in and out of the Trans Mountain pipeline (TMX) staging area.

On the morning of the collision, a New West resident took to Twitter to voice safety concerns after nearly being hit at the same location a day earlier.

“I rode from #NewWest to #PoCo yesterday morning, via United Blvd and Mary Hill bypass. The least safe (read: most likely to get hit by a car) was the section of ‘bike route’ along Canfor Ave. in Sapperton. Why? Because of the traffic in/out of #TMX parking lot,” wrote @PhilRidinBikes.

In subsequent tweets, @PhilRidinBikes suggested  the area requires “better and safer AAA cycling infrastructure” and questioned if someone “needs to die” to get action.

“Coulda been me. Coulda been you. Enough of this shit already,” he tweeted following the Oct. 30 collision. “Please provide SAFE cycling infrastructure.”

Coun. Patrick Johnstone said he plans to raise the issue of safety at the entrance to 430 Canfor Ave. at Monday’s city council meeting. While it was something he was planning to do before Friday’s collision, he said the collision has expedited the need for the city to discuss the issue.

“We are going to be having a conversation in council about the safety of that intersection and whether there is an issue of safety around it,” he said. “There have been some concerns raised to me around traffic around that facility at 430 Canfor Ave.”

Johnstone said the city doesn’t have any regulatory authority over the site, as it’s owned by the Vancouver Fraser Port Authority. Separate from the collision, he said the city needs to have a conversation with the port authority to see if there are ways to make that intersection safer.

The New Westminster Police Department, meanwhile, has a message for all road users.

“As we move into winter, loss of visibility and changing conditions can make roads more hazardous,” Kumar said in a news release. “While we have yet to determine the cause of this incident, we would like to take this opportunity to remind everyone to increase their awareness on our roadways.”