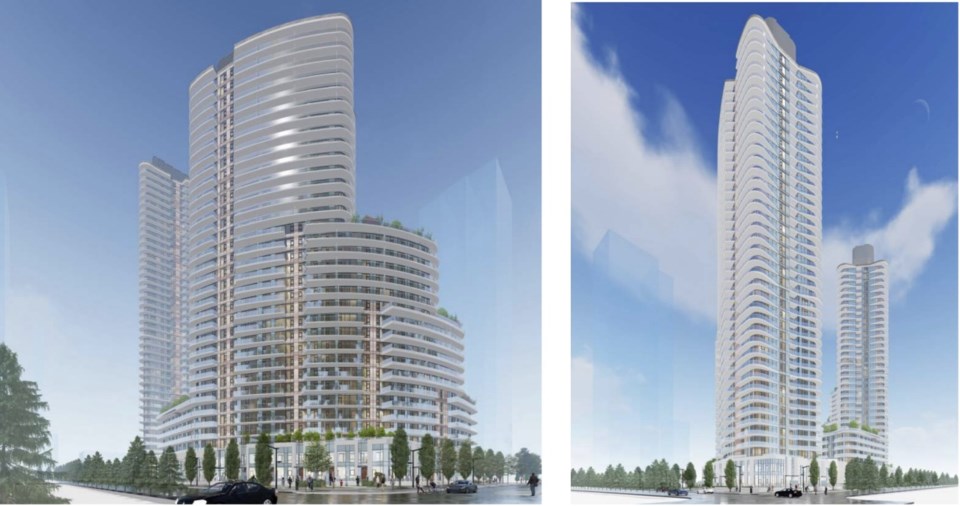 Surrey City Council rezoned a parcel of land south of City Hall Monday, with the effect of more than doubling the previously approved density for the area.

The development, like many others that have received bonus amendments to the Official Community Plan this year, drew criticism from some residents at the virtual council meeting.

“Somehow there’s got to be cumulative data on what these developments are bringing to current taxpayers,” said Ramona Kaptyn.

The towers will overshadow a local park, including the BC Lions facility, between the Surrey Central and Gateway SkyTrain stations.

Concord will provide amenity space for the new residents, such as pools and a fitness centre, plus a green roof. And it will also pay the city $1,000 per unit toward the community amenity fund, as well as $1,000 per unit for the city’s affordable housing reserve.

As a result of the added density, Concord will also be charged $20 per square foot of bonus living space. The development report to council indicates Concord is receiving a 255,807-square-foot bonus, which would result in a $5.12 million payment.

However, largely at issue is how the city is planning to accommodate school-age children.

While both local schools – K B Woodward Elementary and Kwantlen Park Secondary – are already overcapacity, there is a Ministry of Education feasibility study underway to “possibly” add 200 additional seats for Woodward but there are no plans on the table to expand Kwantlen, according to the report.

Woodward already has 10 portables and Kwantlen has 11. Portables are a contentious issue and many councillors have expressed a desire to rid the city of them. But development has put pressure on he ministry to keep pace.

Nevertheless, residents, such as Kaptyn, suggest officials are underestimating how many kids will be living in these new towers. In the past year the same question has been raised on a number of occasions.

“I have to admit it does sound quite odd when there are 173 units and just six students identified,” said Coun. Brenda Locke, speaking to another development that was approved Monday and with similar child-to-unit ratios.

Prompted by Locke’s comment, general manager of planning and development Jean Lamontage said the number is “calculated with a number of factors.”

“So the school district will look at similar building within the area that are in existence with people living in it,” Lamontage said. “And they know exactly how many kids are in school from those buildings from their statistics and enrolment.

“When I look currently the projects that are under construction under design or approved to move forward at the planning stage, there are close to 9000 additional seats that are planned for the city of Surrey at this moment. So I think this work is done fairly diligently between staff of both school district and the city of Surrey.”

The provincial government pays for new schools. Cities collect fees from new developments, but these fees are relatively meagre, as they are outdated, having not been adjusted in 20 years.

Minister of Education Rob Fleming told Glacier Media last March he is looking at raising the outdated fees to pay for new schools, particularly in growing municipalities such as Surrey.

Known as a School Site Acquisition Charge, these legislated fees are intended for new developments to pay, in part, for new schools.

The shortcomings mean existing taxpayers are having to fork over more money from general income taxes for new schools to accommodate new residents.

“We are aware and it’s under active review,” said Fleming March 12. “It was inadequate to begin with and it’s really fallen behind in terms of the value and cost of land in places like Surrey.”

A new house is presently charged $1,000; a townhouse is charged $800 and a new condo unit is charged $600. Buyers of these new homes pay these fees.

The Concord development will result in just $614,400 for new school spaces.

Coun. Steven Pettigrew was the only dissenting vote.