Fundraisers underway for four businesses destroyed in fire
May 26, 2021 2:46 PM By: Theresa McManus 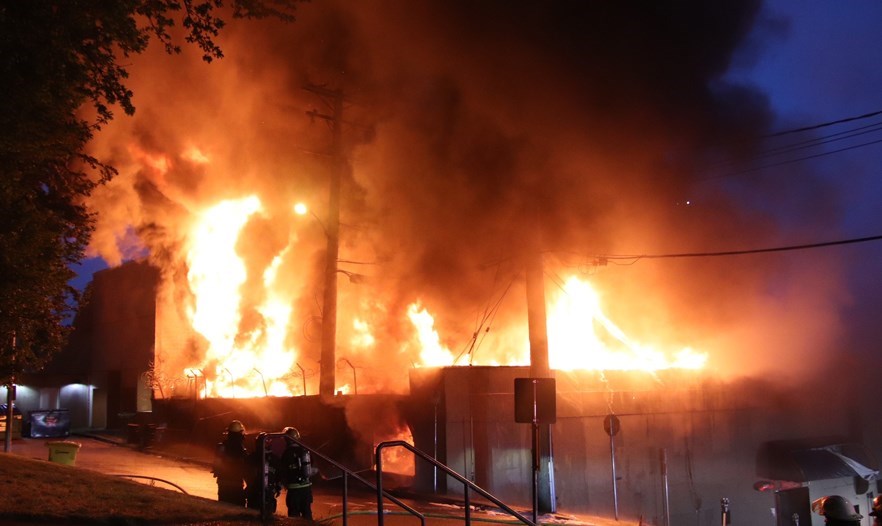 Financial and administrative supports are among the ways the community is responding to businesses destroyed in Monday’s massive fire on Columbia Street.

MagnetiQ Club Lounge, The Heritage Grill, Happy Buddha Tattoo and Pho Pho You restaurant were located in a Columbia Street building that was destroyed in a fire on May 24. New Westminster fire crews were able to prevent the fire from spreading to the adjacent building, but they couldn’t stop it from destroying the 111-year-old building.

“The fire that destroyed four businesses in the downtown on Monday was tragic, and yet another dark spot in what has been a very challenging year,” Blair Fryer, the city’s manager of economic development and communications, said in a May 26 email to the Record. “Economic development staff were in touch with the Downtown New Westminster Business Improvement Association throughout Monday as the fire was being brought under control, and yesterday we reached out to impacted businesses directly to let them know we are here to assist.”

According to Fryer, assistance to the businesses could include helping them identify new locations where they could operate or navigating city processes and policies as they consider their next steps.

Karima Jivraj, president of the Downtown New West BIA, said the BIA’s board of directors is devastated by the news of the fire, and the loss of four extremely valued local businesses.

“These businesses have been a big part of what makes downtown New West so vibrant and welcoming, and have contributed much to our community over the years,” Jivraj said. “It is heartwarming to see the outpouring of support for these businesses from our community. We join you in supporting these businesses as they navigate what might come next.  We thank the New West fire department, with support from other communities, for their diligent work in keeping us all safe.”

GoFundMe campaigns have been created for all four businesses destroyed in the fire.

Within two days, more than 250 donors have contributed to a GoFundMe campaign seeking to raise money for Paul Minhas, owner of the Heritage Grill. The Help Paul Recover From The Heritage Grill Fire fundraiser had raised over $16,000 by Wednesday afternoon, more than tripling its original $5,000 goal.

“Paul Minhas is a pillar of the New Westminster community.  Supporting the arts, the LGBTQ+ community in New West and pretty much anyone else looking for support,” said the fundraising page organized by Geoff McLennan. “Today his restaurant, the Heritage Grill, burned down. Now is New Westminster’s chance to show Paul the support same support he’s shown the rest of us for years.”

Santiago Montaldo has organized the Support Aki & Thomas after the MagnetiQ Club Fire fundraiser, with a goal of raising $7,500.  The fundraiser stated Aki and Thomas Myszka, with help from their son Darius, have operated the Church Street business for the past five years.

“The pandemic caused them to shut completely for over a year, as they patiently waited for the green light that it is finally safe to reopen. Unfortunately, it hadn't made it through, and they consequently lost everything inside,” said a notice about the fundraiser. “MagnetiQ had been a fun and safe environment to come to every weekend, and many people had built memories over the years with their parties. … Let's show some support for the family-run nightclub that lost their years-long project in this awful and unexpected fire!”

Phillip Le organized the Help The Pho Pho You Family Through The Fire page, which hopes to raise $5,000. Le said his family appreciates everything the community has done for his family’s restaurant, and offered condolences to its neighbours, the Heritage Grill and Happy Buddha Tattoo, on the loss of their shops.

“For the past five years, Pho Pho You has truly enjoyed the time spent being a part of the New West community. Unfortunately, early in the morning on May 24th, a fire started in the upstairs unit of the restaurant’s building. Due to the intensity of the fire and age of the building, there was nothing left after the firefighters finished with putting out the fire,” said the fundraising page.  Jack and Jade, the owners of Pho Pho You would like to say thank you to all the support over the last five years. The experience has been amazing, and we are saddened by the news of these events. I am Jack and Jade's son and I would like to set up this GoFundMe page for my parents to get them and my siblings through the next few months until the investigation and insurance has settled.”

“This fundraiser is to ensure that our artists, who we look to as a part of our family, can have their tools that have been lost in  the fire in order to continue their passion, and your donation will be used to replace the necessary equipment as each machine can cost of an upwards of $1,000+,” said the fundraising page. “We have seen such a great help from the community reaching out to help us find a new home. And thank you for helping Happy Buddha re-grow through this next step in our journey.”