Cancelling Anvil Centre booking for Christian youth conference about 'sexuality and identity issues' was an unreasonable infringement of Grace Chapel's freedom of expression, according to BC Supreme Court ruling
Jul 20, 2021 4:05 PM By: Cornelia Naylor 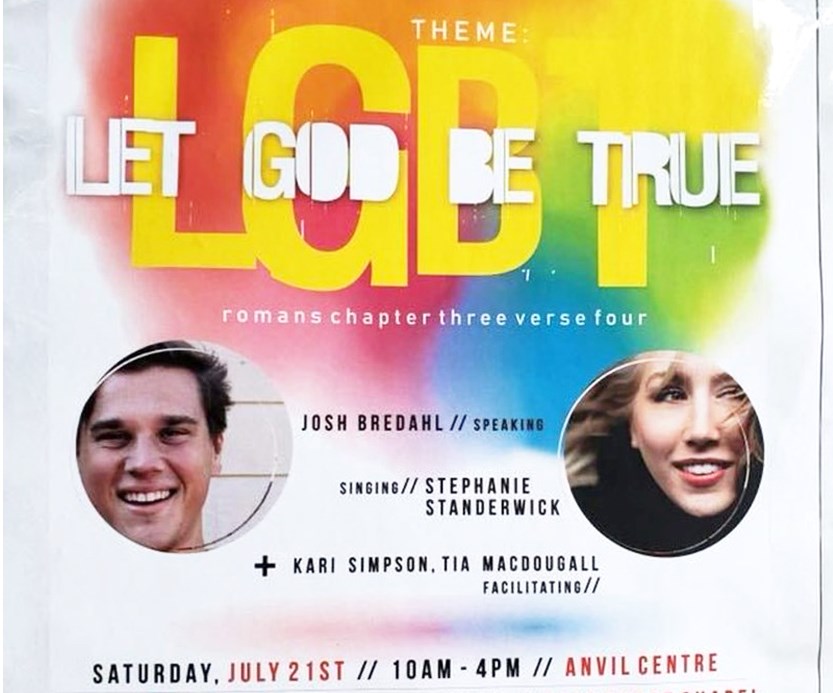 New Westminster's Anvil Centre cancelled a venue booking for a Christian youth conference in June 2018 because of concerns it would include anti-LGBTQ material.Contributed

A B.C. Supreme Court judge has ruled the City of New Westminster “unjustifiably infringed” on a local church’s freedom of expression when it cancelled an Anvil Centre booking for a youth conference centred around “Biblical views regarding sexuality and identity issues.”

“I am very aware that the city was attempting to protect LGBTQ rights when it made its decision to cancel the youth conference,” Justice Maria Morellato wrote in a decision Monday. “This is laudable, and such minority rights must be considered. Yet, an important step in the city’s decision-making process was missed. The city did not reach an informed conclusion; rather, it proceeded to make its decision on the basis of assumptions about the youth conference and what it would involve.”

The case dates back to the summer of 2018, when the Redeemed Christian Church of God, also known as Grace Chapel, booked a ballroom at the city-owned Anvil Centre for a conference dubbed Let God Be True.

A poster advertising the event, which was scheduled for July 21, 2018, sparked a complaint from the public.

The letter said one of the facilitators listed on the poster, Kari Simpson, was a “very active anti-LGBTQ speaker and the face & voice behind Culture Guard, a well-known anti-LGBTQ group in the Lower Mainland.”

The letter writer described the conference as an “anti-LGBTQ event” and urged the city to cancel the booking.

“They are spreading misinformation and lies, and by allowing this event to take place, you are effectively endorsing their stance,” stated the letter.

Staff at Anvil Centre looked into the poster and Simpson and recommended the booking be cancelled, according to the court ruling.

With approval from city manager Lisa Spitale, who noted in an email that the mayor should be briefed, Anvil Centre cancelled the rental on June 21, 2018, the ruling said.

“We became aware today, that one of your event speakers/facilitators, Kari Simpson, highlighted for your July 21st, 2018 event, vocally represents views and a perspective that run counter to City of New Westminster and Anvil Centre booking policy,” stated the letter cancelling the booking. “Specifically, Anvil Centre booking policy restricts or prohibits user groups if they promote racism, hate, violence, censorship, crime, or other unethical pursuits.  In accordance with our policy we are informing you that we are cancelling your booking.”

Grace Chapel administrator Ronald Brown said he was surprised by the sudden cancellation and urged the city to reconsider.

“It is unfortunate that the Anvil Centre has taken the decision to cancel the event without first discussing the matter with us,” Brown wrote in a letter to Anvil Centre sales and marketing director Heidi Hughes. “If there are queries or concerns from the centre, we believe that due process should prevail and the centre should give us an opportunity to explain what our intentions are.”

Hughes told Brown she would be willing to meet to further discuss the policy but stated: “Please understand that this does not change our decision and the event is cancelled.”

The city then got a letter from the church’s lawyer urging it to reverse the decision.

“It is not against the public interest to hold and express diverse views regarding sexuality,” stated that letter. “Further, governments at all levels are precluded from favouring any one belief system over another, including beliefs regarding sexuality and gender, and from discriminating against minority beliefs.”

The city did not reverse its decision, and Grace Chapel took it to court seeking – among other things – a declaration that the city had unjustifiably infringed on its freedoms of religion, expression and association.

On Monday, Justice Morellato dismissed the church's claim the city had unjustifiably infringed on its freedom of association since Grace Chapel meets every Sunday at a facility other than Anvil Centre.

“It is also free to meet at any other time, at any other location of its choosing, to associate with its members or whomever else it chooses. This does not rise to the level of a substantial interference,” Morellato wrote.

As for the church’s freedom of religion, she said it would take a civil claim or action to determine if there had been an unjustifiable infringement there.

But the city had unjustifiably infringed on Grace Chapel’s freedom of expression, Morellato said.

“In this particular case, the city failed to proportionately balance competing Charter rights,” she wrote. “The city took immediate steps to research and consider the concerns raised by the complaint it received that anti-LGBTQ views would be disseminated at the youth conference.  Yet, before cancelling the youth conference the very next day, the city took no similar steps to more fully inform itself about the anticipated content or focal points of the speakers at the youth conference.  There was a clear imbalance in the city’s efforts to inform itself of the competing rights at stake, or to at least attempt to balance them.”