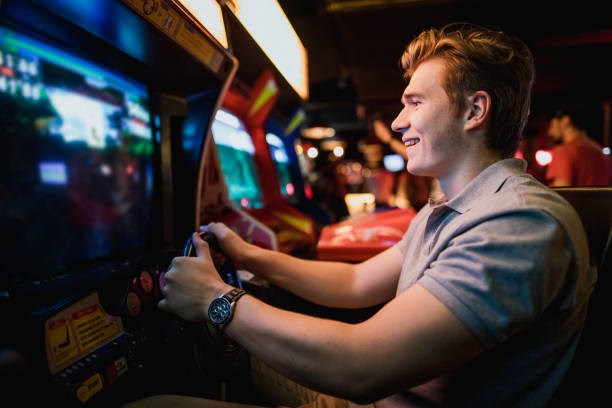 Capital City Arcade is getting closer to its goal of getting permanent status and being able to serve alcohol at its Sapperton location. Getty Images

Adults may soon be able to enjoy a glass of wine or a beer while they’re playing Pac-Man and other games at Capital City Arcade.

After operating under a temporary-use permit since February 2018, council has given three readings  amendments to the zoning amendment bylaw and the business licence bylaw related to the retro gaming arcade at 457 East Columbia St.  The two-year temporary-use permit imposed a variety of restrictions, such as prohibiting the sale of liquor, restricting operating hours to between 6 a.m. and midnight and requiring “age-appropriate” games.

Owners Brad and Maryanne Eyers sought the city’s support for bylaw changes that would allow the arcade to operate permanently at the Sapperton location as they want to be a fixture in the area for as long as possible.

“We feel we are providing a fun, safe environment not only for adults, but for entire families,” they wrote in a submission to the city. “People who remember playing these classic games when they were kids are being transported back to their childhoods, and they are bringing their children along to learn where all of today's modern games come from.”

The owners report that Capital City Arcade has had “an extremely positive response” from the local community and has brought people in from all over Metro Vancouver and abroad.

“We hope to move forward with fewer restrictions in order to provide our customers with the experience they desire, all while maintaining our goal of a fun, safe, family friendly experience,” said the submission.

A staff report to council stated amusement arcades became restricted in New Westminster in 1999, in response to a regional trend where municipalities were responding to complaints about noise, hours of operation and nuisance or unlawful behaviour at arcades.

To allow the arcade to open, the city approved a temporary-use permit, and agreed to review the matter near the end of the two years and consider a zoning amendment that would allow the business to operate on a permanent basis and potentially reduce restrictions imposed under the temporary-use permit.

On Nov. 30, council supported a zoning amendment bylaw and a business licence amendment bylaw related to the business, which opened in July 2019.  The business won’t have any restrictions on the number of machines, will be able to operate from 6 a.m. to 1:30 a.m. (in alignment with liquor service hours to 1 a.m.) and it will continue to be restricted to having no games with pornographic related content.

The city also supports Capital City Arcade’s application to the Liquor and Cannabis Regulation Branch for a liquor primary licence, which would allow liquor to be sold and served in the games area.

The applicants say alcohol service has been the number 1 request from customers since the arcade opened.

“We do not, or have ever, wanted to be a bar. We want to be 100% an arcade first and foremost, but one that allows adults to have a drink of their choice while here,” said the submission to council. “Our preference would to only offer cans of beer, possibly a glass of wine. We honestly wish the BC Liquor Board offered a “beer and wine” licence as they do in parts of the U.S., but unfortunately they do not. So according to their newly updated rules, we will be applying for a liquor primary licence with family food service, in which minors are not permitted after 10 p.m.”

Like many other businesses, Capital City Arcade closed temporarily in March 2020 because of the COVID-19 pandemic. It reopened in July 2020 with a number of cleaning, payment and social distancing changes to ensure customers can safely play about 70 classic video games from the 70s, 80s and 90s.