March saw the highest monthly sales total ever recorded in Metro Vancouver, leaving many with a fear of missing out and others to only dream, say experts
Apr 2, 2021 1:14 PM By: Stefan Labbé 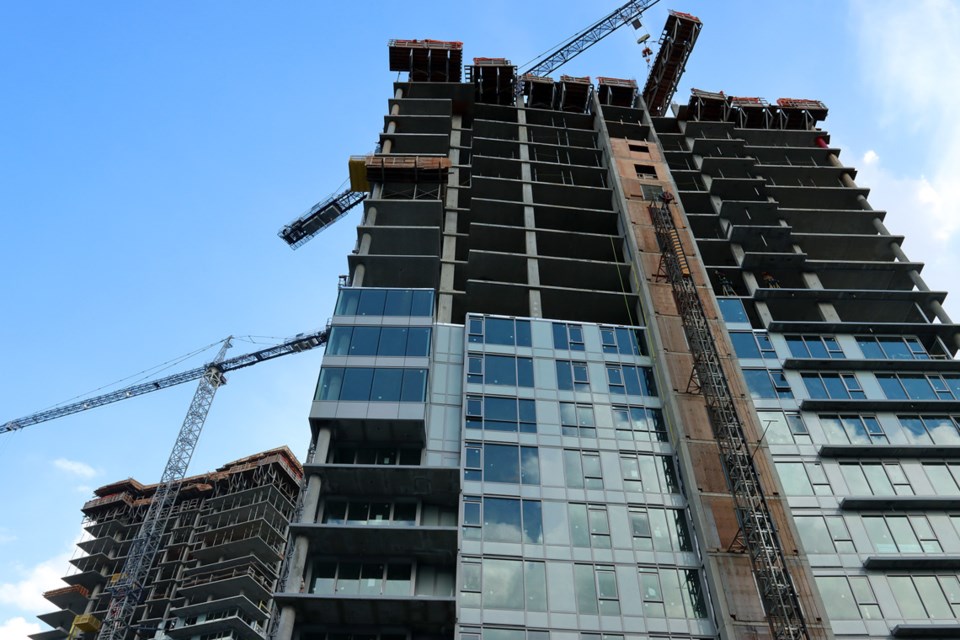 A condo building under construction in Port Moody, B.C. In February, the province outpaced all others in the number of building permits it approved, but that has done little to keep up with unprecedented demandMARIO BARTEL/THE TRI-CITY NEWS

In what the Real Estate Board of Metro Vancouver is describing as “unprecedented levels” of home buyer and seller activity, March home sales spiked to 5,708 across the region, a 126% increase from the 2,424 sales recorded in March 2020, according to an REGBV press release issued Friday.

That puts last month’s sales 53% higher than a month earlier and 72% higher than the 10-year March sales average, said the organization, which represents more than 14,000 realtors across the region.

“In March, residents bought and listed homes across our region at levels not seen before,” said REBGV chair Taylor Biggar in a written statement. “This surge in activity is increasing upward pressure on prices. We’re beginning to see double-digit price gains for single-family homes and townhomes over the last 12 months.”

HOW IS THIS POSSIBLE IN A PANDEMIC?

At the start of the pandemic last March, experts across the country predicted the virus would cause housing prices to plummet.

But contrary to expectations, the market — which in B.C.’s Lower Mainland led to $33.7 billion in sales in last year — has reached unheard of levels, to the point where Bloomberg last month ranked Vancouver as the second hardest place in the world to afford a place to live after Hong Kong.

Instead of sinking the entire economy, the pandemic has ravaged specific industries, like retail, tourism, or restaurants and bars — lower-paying jobs where, even at the best of times, salaries rarely rose to the levels necessary to purchase a home.

And while Statistics Canada found the number of long-term unemployed Canadians fell 49,000 in February from a high of 512,000 in January, recent shutdowns and circuit breaker measures in B.C. and Ontario threaten to derail those gains.

At the same time, those who have been able to work at home in higher-paying industries have found public life and opportunities to travel shut off to them. With discretionary spending down, savings have gone up for many at a time working from home has meant more people looking for more space.

Compound that with historically low interest rates, and REBGV’s Biggar says its no surprise the real estate market has reached a frenetic pace.

Earlier this week, a special report from the Bank of Montreal Economics division called on policymakers to “act immediately” to douse the “Canadian housing fire.”

The latest surge in demand, according to the report titled Canadian Housing Fire needs a response, has been driven by market psychology, with expectations for home price gains the highest in a decade, and expectation for mortgage rate changes the lowest in a decade.

“The action needed today is one that immediately breaks market psychology and the belief that prices will only rise further,” wrote BMO senior economist Robert Kavcic and economic forecaster Benjamin Reitzes in the report. “That would dampen the speculation and fear-of-missing-out that those expectations are creating.”

Warning that "bubble talk is raging," the economists recommended a number of measures policymakers could roll out to quell rising costs in the housing industry.

Top of the list would be for the Bank of Canada to hike interest rates up from historic lows, what they describe as “arguably the key drivers behind the meteoric surge in home sales and prices across large swathes of the country.”

But the economists write such a move would be a “blunt tool” and would surely spill over into the rest of the economy, strengthening the Canadian dollar and lengthening the pandemic recovery.

Other potential solutions the BMO economists put forward include creating a system to eliminates blind bidding to “limit the ballooning” of prices, increasing capital gains tax on non-principal residences to discourage house flipping, and increasing supply of single-detached homes inside and outside of major urban areas.

In a place like Metro Vancouver — where space is limited and communities are often squeezed between mountains, rivers and sea — building fast enough to keep up with demand is never easy, even as B.C. recently dominated other provinces in the number of building permits it approved.

A record number of homes were put up for sale in Metro Vancouver in March, but they sold so fast that available inventory last month fell 18.6% below the 10-year March average, according to the REGBV.

“While we did see a record number of listings enter the market last month, the demand in today’s market isn’t allowing that new supply to accumulate,” said Biggar.

WHAT DOES IT ALL MEAN FOR THE PRICE OF A HOME IN THE TRI-CITIES?

The composite benchmark price for all residential properties in Metro Vancouver increased 9.4% year-over-year in March to $1,123,300. That’s a 3.6% increase compared to February 2021, says the REGBV.

In the Tri-Cities, each of the three major municipalities saw significant growth in benchmark prices for all kinds of homes: over the last year, composite benchmark prices went up 16.2% in Port Coquitlam, 11.6% in Coquitlam and 9% in Port Moody.

When it comes to detached homes, Port Coquitlam’s benchmark price once again climbed the highest at 27.7% growth over last year, whereas Port Moody saw a 22.5% jump and Coquitlam rose 20.2%.

The cost of a Port Coquitlam townhouse saw 17.1% growth in its benchmark price over the last year, once again the highest of the three cities and the second highest in the region after Maple Ridge, which grew 18.6% over the same period. Coquitlam, meanwhile, saw an 11.2% spike and Port Moody a 7% increase over the last 12 months.

The benchmark price for an apartment in the Tri-Cities saw more modest year-over-year increases, rising 6.7% in Port Coquitlam, 6% in Coquitlam and 3.9% in Port Moody.

Letter: If this Coquitlam arena can be seized for vaccinations, why can't it double as a homeless shelter?
Mar 31, 2021 3:16 PM
Comments