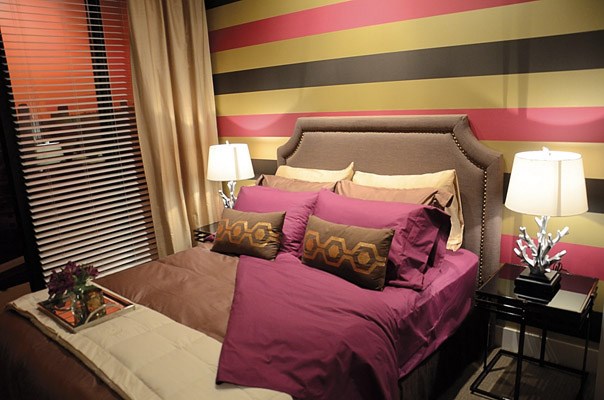 Home sweet home: A model master bedroom from the 258 condo development inside the show office on Sixth Street. The development is expected to sell out Saturday.Larry Wright

Inside the tent flapping in the wind at the corner of Sixth and Welsh streets is an innovative new way to market condo presales that could change the way Realtors sell yet-to-be-built units.

Pilothouse Real Estate, which is selling Tridecca Developments' "258," a 16-storey tower at 258 Sixth St., has set up a series of computers and projectors that broadcast onto the floor life-sized, detailed floor plans of the condo's multiple types of units - a system they are calling "InRealTheatre."

"It's nine computers, 17 projectors and a lot of brain damage because how do you make them line up? This is the first version anywhere in the world. It's really given people a sense of space for presale," said Vince Taylor, a partner in New Westminster-based Pilothouse.

From a touch screen computer terminal at the edge of the theatre, Taylor can switch between unit models while prospective buyers explore the space. The system projects time-lapsed video of the eighth floor viewscapes in all four directions onto the walls. They are also piping in the sound of chirping birds, and smell atomizers give the virtual showroom a garden scent. The sound of traffic comes courtesy of trucks on Sixth Street on the other side of the tent's canvas.

Taylor said about 3,000 people have come in to see the system since the showroom opened earlier this month and the response has been one of awe.

Taylor said the biggest challenge in marketing units in a building that hasn't been built yet is convincing people of the value and comfort of a space they have only seen written down as dimensions on paper.

"People say, 'I don't understand the space. I look at these plans but I'm not a visual person.' So over a couple beers we said why don't we do this?"

The funny thing, he said, is watching people traverse an empty room but follow the lines projected onto the floor, refusing to walk through walls or cut corners.

"They bring in cardboard sofas," he said "People sit in the tub."

Taylor said the company is already thinking about improvements to the system for its next project, which may include adding colours, textures and furniture.

Taylor said the company has seen a lot of interest from investors who are particularly attracted to 258's two-bedroom units for rental housing.

And much like their last project, Eight West, there has been a lot of interest from locals who want to get their kids or grandkids started in their first home while keeping them close by.

"New West buys New West," he said. He said about 15 per cent of potential buyers have been offshore investors from China.