The Queensborough Cannabis Co. may have been the last cannabis store to get city hall’s approval, but it’s the first to open in New West.
Jul 8, 2020 3:19 PM By: Theresa Mcmanus 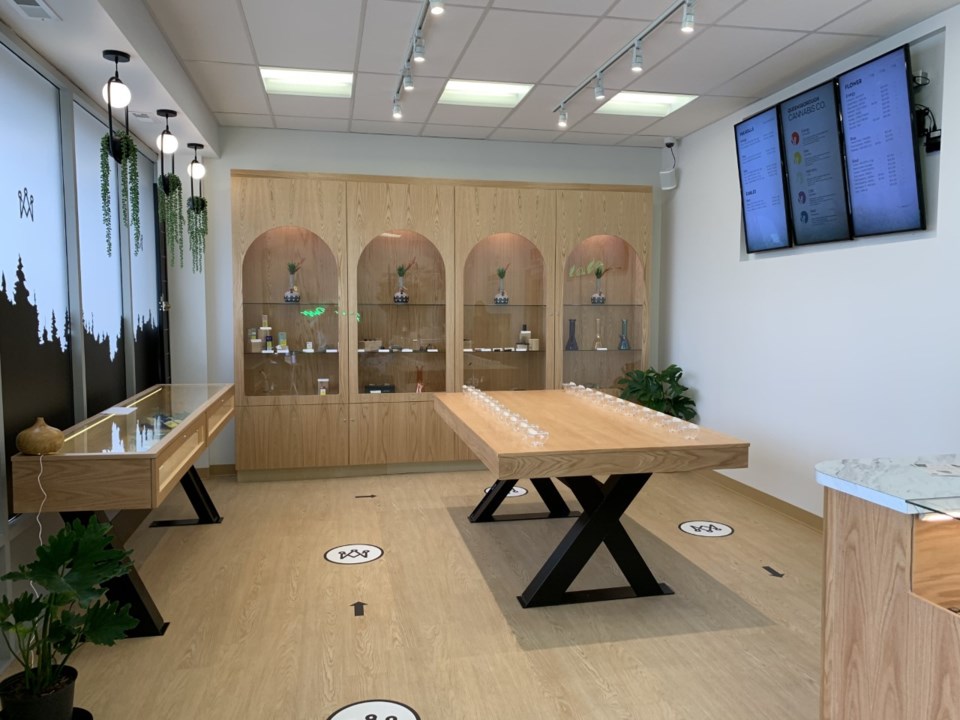 City of New Westminster bylaws currently prohibit the sale of edibles at cannabis shops like the Queensborough Cannabis Co., which opened in July. The city is taking action to allow for the sale of edibles - which are legal in Canada.Contributed/File

The Queensborough Cannabis Co. may have been the last cannabis store to get city hall’s approval, but it’s the first to open in New West.

While the federal Cannabis Act has permitted the sale of cannabis in Canada since October 2018, applicants have been slowly making their way through the various steps required before the doors open. The Queensborough Cannabis Co., whose application was approved by city council in October 2019, opened on July 2.

With “so many people” knocking on the door and coming by in search of product, owner Calvin Basran said the Queensborough Cannabis Co. thought a soft opening was the way to go. The store’s grand opening, taking place on Saturday, July 11, will include a contest and prize package giveaways for the first 50 customers.

“We are ready to go for our grand opening and ready to serve the public,” he said. “We are very excited about it.”

According to Basran, the store has had an “amazing” response from the neighbourhood, and business “has been great” during its first week.

“My staff is very well educated on all of our products,” he said. “They are amazing.”

Basran said the soft opening helped prepared the staff for the volume of customers the Queensborough Cannabis Co. anticipates.

Following a public hearing in October 2019, city council approved the Queensborough Cannabis Co. application – one of two cannabis shops planned for Queensborough, as a government-run store has been given the green light at Queensborough Landing shopping centre. About 20 people spoke about the private store at the public hearing, with the supporters and opponents evenly divided.

“We did whatever we can to over-exceed the neighbourhood’s and the City of New West, their expectations of a legal cannabis shop. We really over-exceeded ourselves, I feel,” said Basran, when asked about residents’ concerns. “Design was a big part of this. The main thing is making sure that customers feel safe and welcome coming into our establishment, and something safe and clean for the neighbourhood.”

Basran describes the Queensborough Cannabis Co.’s design as being West Coast modern, with a light and airy feel.

“I encourage anybody, whether they use any products or not, to stop by and check it out and see what’s new in the neighbourhood,” he said.

In the spring of 2018, the City of New Westminster launched a public process regarding the development of a regulatory framework related to the sale of cannabis. As part of that process, the city sought public input about five areas within municipal jurisdiction: regulation of cannabis retail locations through the zoning bylaw; business licence requirements for retail locations; business licence regulations for cannabis production, warehousing and cultivation facilities; public consumption limits through smoking control bylaws; and personal cultivation limits.

Following the development of the regulatory framework, the city decided to support a mix of private and public stores in different commercial areas of the city.

Mike Watson, a senior planner with the city, said the city still has not heard back from the Liquor and Cannabis Regulation Branch regarding the financial integrity and security checks for the Herb Co. Cannabis Store, so a public hearing regarding the application for 452 East Columbia St. hasn’t been scheduled.

While it’s taking time for stores to open in New West, Basran said he give props to city staff and council for their efforts.

“The City of New West did a great job of putting this thing together,” he said. “They made the application process intense, as it should be, because this way they were very selective about who they were bringing in to operate these shops in the city. I feel that’s very, very important.”

Making it through the province’s regulatory checks and getting rezoning approval from the city are among the hurdles applicants must overcome before they can open their doors.

“Once you get the approval from the city it’s not that bad,” Basran said. “It’s just a matter of renovations and working with the province, working with the cannabis inspectors, making sure everything is compliant.”