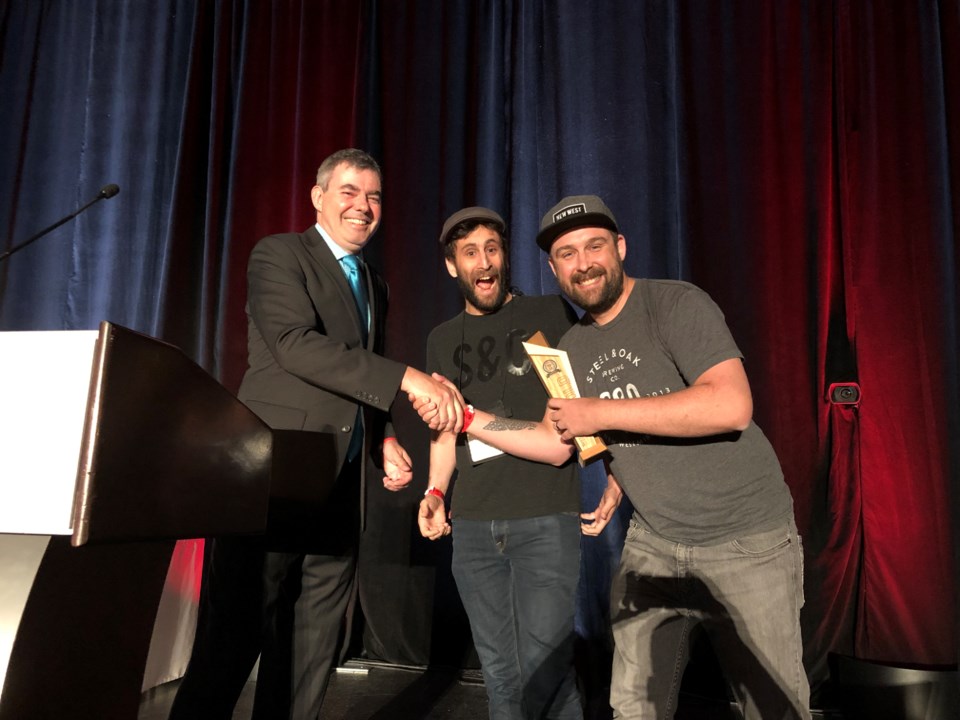 Jorden Foss, right, and Eric Moutal of Steel & Oak Brewing were all smiles when they accepted one of two awards at the the 2019 Canadian Brewing Awards in Toronto.Contributed

Congrats to the crew at Steel & Oak Brewery who picked up some awards at the Canadian Brewing Awards.

Steel & Oak came home with two awards from the recent Canadian Brewing Awards and Conference in Toronto. Awards are given out in 55 categories.

Simple Things Pilsner, which is available in six-packs across B.C., won a Silver in the Kellerbier category, while Dark Lager, which is also available across B.C. in 4x473ml cans, won Gold in the Dark/Amber Lager category. Dark Lager has taken home three B.C. Beer Awards, but this is its first win on the national stage.

“It was a pretty amazing experience hearing Dark Lager announced as the Gold Medal winner so early in the night,” Jorden Foss, co-founder of Steel & Oak. “Then only two categories later we get called up for Simple Things!”

Foss and Steel & Oak head brewer Eric Moutal attended the awards and conference in Toronto, along with hundreds of other breweries from across the country.

“Dark Lager has a long history of winning awards so it’s awesome that it finally took a Canadian Brewing Award,” Moutal said in a press release. “But for us, Simple Things is the one we are so proud of. That beer is a brewery favourite, and one that we all drink most of the time.”

Steel & Oak won a Silver for its Baltic Porter at last year’s Canadian Brewing Awards in Halifax. Next year’s conference and awards will take place in Victoria.