Turning a passion into business 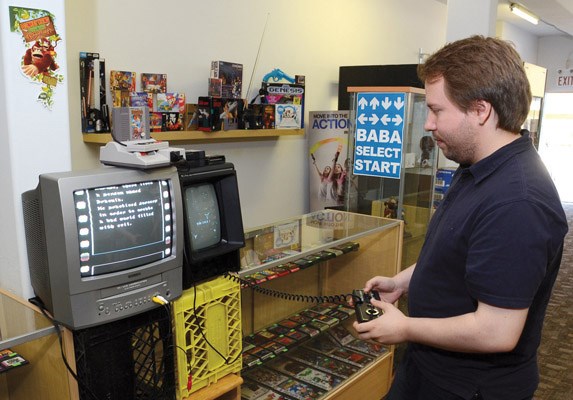 Break time: Russell Bradley gets to enjoy a bit of his lifelong hobby while working at his 12th Street shop. The store carries current video games, but also specializes in retro games that are more difficult to find.Larry Wright

Twelfth Street has a new addition by way of Press Start, a new and used video game store that takes a love of retro games to the next level.

After working for video game stores, Russell Bradley, 26 - a passionate gamer from his early youth - decided to not only be his own boss, but also turn his hobby into a business.

"I started to play video games when the first Super Nintendo came out," Bradley said while at the back of his store, sitting in front of the 55 inch LCD TV screen hooked up with an XBOX, XBOX 360, Nintendo 64, PlayStation 2 and 3, Sega Mastersystem and Wii, put there for anyone to play on a big comfy couch. "We also have an original Nintendo hooked up to an older TV."

Press Start officially opened last November, and it specializes in older games dating back to the Super Nintendo to the current PlayStation 3 - he also has old and new consoles in stock, such as the Nintendo 64, Wii and others.

"It took two to three years to make happen," Bradley said. "I always tend to do things the hard way."

The store has innumerable retro games and new games on sale, for the collectors to the everyday gamer.

"I got into the collectors' circle," he said. "We buy, sell and trade them. We also pre-order new games."

In the last few weeks, the store has also implemented a board and video game night that's adult and kid friendly.

"It's about creating an atmosphere that will bring people back," Bradley said about his Saturday gaming nights. "We're also into doing festivals and had a lot of fun at the 12th Street Festival. We had face painting and everything."

Bradley also said the store does well by attracting collectors who come in knowing what they want.

"Customers don't really see all the collectors coming in," he said. "They're here for about five seconds because they've already talked to me and know what they want."

Press Start is also equipped with two old arcade games (although the retro X-Men one is currently not working) and Bradley said he can only have up to three.

"I'm looking into applying for another permit so we have more," he noted.

"I want to be able to supply more memoribilia, like stuffed animals, t-shirts, you name it," he explained. Currently, the store has some things in between the shelves and glass cases that definitely fill the dreams of any retro gamer.

Also, Bradley said he'd like to further branch out and start to carry collectible card games such as Magic: The Gathering.

"My favourite console is the Super Nintendo," Bradley said. "My favourite game is Earthbound. But that's pretty old. I also like Uncharted."

With his sights set on expansion, it seems Bradley's has already headed in the right direction and hopes to make his store a staple in the community.

To find out more go to Press Start's Facebook page. Bradley said he is working on a website, which will also feature game reviews, coming this fall.