The Hub Barbershop’s legacy lives on in New West 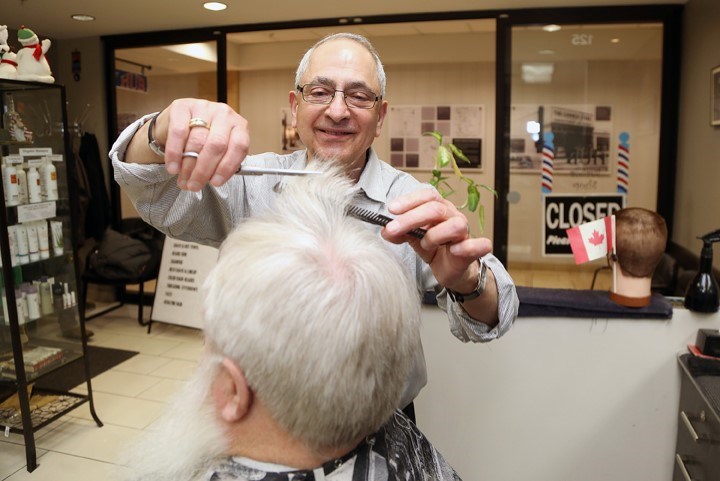 Paul Sanders sold the Hub Barbershop in January, but continued to work in the shop three days a week - until it was forced to close temporarily because of COVID-19. The Hub has a long history in Uptown New West.Lisa King

Ah, the stories he could tell.

After more than 50 years in Uptown New West, Paul Sanders recently sold the Hub Barbershop and started easing his way into retirement – something he’s happy to do now that he’s confident his family’s business legacy will carry on. John Van Leest, Sanders’ father-in-law, took over the Hub Barbershop in 1955, and it Sanders kept it going when Van Leest retired.

“I feel very privileged and lucky to do what I have done – just that everything fell into my lap to go into barbering because of my father-in-law. Everything just turned out beautiful,” Sanders said. “It’s something I still really, really enjoy doing. When you have been in this business long enough and have the customers I have had, they become customer-friends.”

It was important to Sanders that the Hub Barbershop’s name live on because it carries on the legacy of Van Leest, a man he affectionately refers to as dad. The Hub wasn’t the first business the duo pursued together, but it was definitely the longest lasting.

“Dad and I opened the Rainbow Billiards at 708 Sixth St. in New Westminster in the 60s. We ran that for a few years. It didn’t do well. Matter of fact, we lost a little bit of money,” Sanders said. “At that time we had the most modern billiard hall in North America.”

Billiards may not have been a successful venture, but barbering, now that’s a career with staying power.

“Dad was a barber. When we sold Rainbow Billiards, I was going to go off into a different area,” Sanders said. “Dad said to me, ‘Paul – have you ever thought about being a barber?’’ I thought about it, and said, ‘Sure, I’d like to try.’ That’s how I got into barbering. I went to barber school in Vancouver. It was fantastic. I apprenticed in North Vancouver and then I came to work for dad. That was in the 1970s. That’s how I got into the barbering businesses.”

Although the COVID-19 crisis has forced the barbershop to close temporarily, when it reopen Sanders will return to working three days a week, something he’s been doing since selling the Hub in January. Working Thursday to Saturday is the best of both worlds; he has more time at home with his wife, Deanna, and he maintains connections with all the folks he’s met through the years.

“I am loving it. I have been doing it since January. But you know, I am awfully happy when I come back to work on Thursday. I am so glad I am able to do what I am able to do, and to have that many days off. No pressure,” he told the Record before the shop temporarily closed because of COVID-19. “It’s a real social thing for me. I really enjoy doing it.”

Sanders had an opportunity to sell the Hub to a couple of different people, ultimately selecting Mina Pourjahani.  He thinks the shop’s legacy is safe in her hands.

“That is why I selected Mina,” he said. “One of the biggest reasons I selected her for the Hub Barbershop is she cares. She really cares about the haircut. So many people in the business today, I’m not going to say.”

Pourjahani heard about the Hub from friends in New West and helped out at the shop when one of Sanders’ employees was away. Having had her own salon in the past, the North Vancouver resident was keen on the idea of working in a barbershop instead of a salon, as it involves fewer hair care products, and is better for her skin.

“This is the best place,” she told the Record.

With a loyal customer base, including many who have been getting their hair cut at the Hub for decades, Pourjahani has adjusted to something  a bit different than she’s encountered in past salons.

“What was interesting for me, I didn’t see before a lot of grey hair,” she smiled.

Through the decades, Sanders’ clientele has included many of the city’s “movers and shakers” including mayors and city councillors, city employees, school principals, hall of fame lacrosse players and former CFL player Jon Cornish (when he still had hair).

The Hub was included in a 2015 exhibition at the New Westminster Museum – Hair Apparent: A Hairy History of New Westminster. Sanders contributed some items, including antique razors, to the exhibition.

Sanders and his wife would often share stories about the things they heard during the work day – but some things are off-limits.

“When we have our happy hour at home, which we do and have done for 40 years, Deanna and I, it’s never been short on the conversation,” Sanders said. “As a hairdresser, I am generally interested in what she had to say. As a barber, she was always interested in what I have to say. Besides talking about the kids, we always had something neat and funny. There are a lot of stories she doesn’t know – and I’m not going to let you print them either.”

Ken McDonald, who was born and raised in New West and went on to work in the  school district for 38 years and serve two terms on school board, is one of those loyal customers who have gone to the Hub for decades.

“I just feel so comfortable with Paul. Number 1, he is a very good barber. It is the nicest atmosphere in the barbershop. Everybody is friendly. Lots of jokes,” he said. “He is just a great guy. It is such a nice feeling to go in and get your hair cut. One of the disadvantages over the years is that you have a wait, but you don’t mind waiting for something this good.”

Sanders is looking forward to the day the shop can reopen and he can get back to the work he loves.

“Especially now that I am semi-retired – the feeling now is like never before. I have always enjoyed it. I didn’t think I could enjoy it even better,” he said. “Because of having Nina here, and we have a third one here part time, I can look after my customers, and that’s just what I want to do. The pressure is off.”