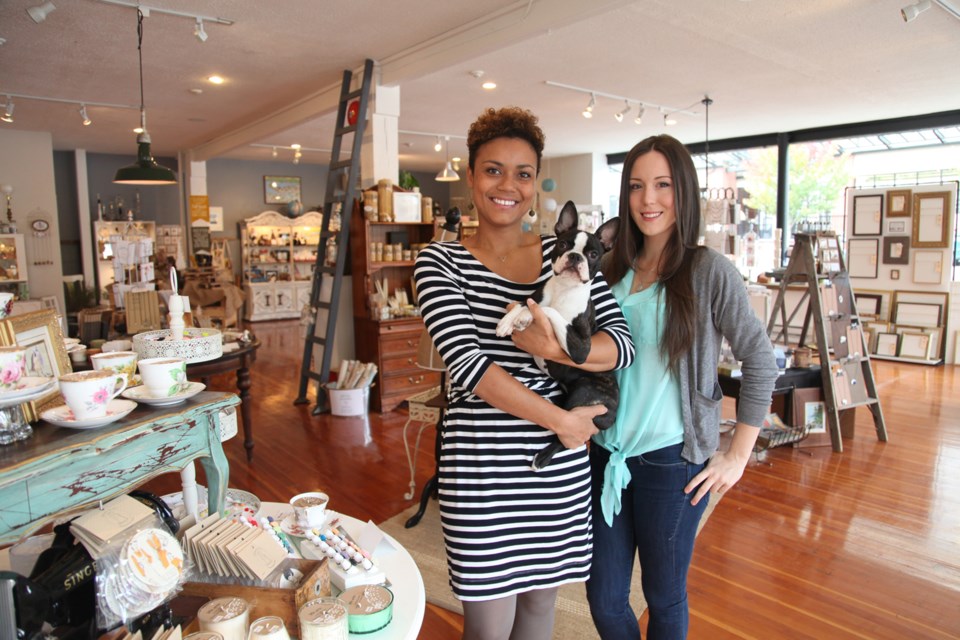 Brick & Mortar Living is among the New West businesses in the running for Small Business B.C. Awards. Sisters Julie Dewhurst and Emma Nash run the shop on Sixth Street.

The owners of a New Westminster yoga and dance studio are using their business to help the local animal shelter.

Twice a month, the folks at MOVE Yoga, Pilates and Dance Studio in Sapperton hold a Karma Yoga 101 class that’s by donation. All of the proceeds are being donated to the New Westminster Animal Shelter.

“We are huge animal lovers,” said Aaron Hart, who co-owns the studio with his wife Jenni. “The class is instructed by either Jenni or newly trained teachers looking to gain experience in a studio.”

The next Karma Yoga 101 classes are scheduled for Dec. 5 and 19 at noon. The Harts are planning to take their donation to the shelter on Dec. 19.

Hart said other Yogi’s are welcome to contribute by by donating their time and teaching these classes to gain experience for themselves. The company’s goal is to raise $300.

“We have not discussed with the shelter what specifically the contribution will be used towards.  We want the money to be used where it is needed most,” he said. “We have even had staff from the shelter come take class and make donations.  They really care.”

Jenni and Aaron Hart live in Sapperton, not far from the studio they opened in the Brewery District development on Jan. 12, 2015.

“This business has always been Jenni’s dream and we wanted to build something in our own community,” Hart wrote in an email to the Record. “When we discovered this space in the Brewery District the timing was perfect and we were excited to get in and be part of the revitalization of the neighbourhood.”

Shop the Neighbourhood this weekend

Shoppers can support local business and get some deals in return when Shop the Neighbourhood comes to downtown New West this weekend.

Yellow Pages and Business Improvement Areas of B.C. are bringing back Shop the Neighbourhood, a national shop-local day aimed as supporting small and local businesses.

“We love participating in this initiative because it aligns perfectly without our mandate, supporting local business,” said Madison McKitrick, program and events coordinator at the Downtown New Westminster BIA. “The Downtown New West BIA are once again proud participants, first signing on with the campaign in 2014 for the inaugural year.”

More than 20 downtown businesses are offering deals to shoppers on Saturday, Nov. 28. You can download the free ShopWise app to see all the deals – http:/shopwise.yp.ca.

The City of New Westminster is offering free parking on the Front Street parkade from 10 a.m. to 6 p.m. (enter via Sixth Street.)

Six New Westminster businesses are in the running for the 13th annual Small Business B.C. Awards.

A key part of the awards’ mission is to celebrate the contributions of new and existing businesses in B.C. that have fewer than 50 employees. Six New West companies have been nominated for awards:

“Small Business B.C. takes great pride in celebrating entrepreneurs and helping them to become more successful. While individually small, these businesses have a big reputation across Canada and around the world,” George Hunter, CEO at Small Business B.C. said in a press release. “I am delighted to see New Westminster’s vibrant business community entering the Small Business B.C. Awards to be recognized for their achievements both locally and globally."

The contest is open for nominations and voting until Nov. 30, with community members invited to nominate their favourite small businesses for a Small Business B.C. Award. Nominated business owners will be tasked with gaining as many votes as possible through social media, word of mouth, e-mail or any other means possible.

The businesses with the highest number of votes in each award category will be announced as the Top 10 on Dec. 11 and these nominees will submit a detailed application that judges will use to determine the Top 5 finalists from each award category. The Top 5 finalists will then be invited to present a 10-minute Dragons' Den-style pitch to the judges to prove themselves as one of B.C.’s best.

Winners will be announced at the Small Business B.C. Awards Ceremony on Feb. 25, 2016 at the Pan Pacific Vancouver Hotel.

17614
Pfizer temporarily reduces European deliveries of vaccine
1170
Filming in New West: A bright spot in a challenging year
445
New West athlete remembered for her zest for life
221
UPDATE: Here's where you could be able to buy cannabis in New West
188
Keep those gloves handy: Environment Canada updates winter forecast for Vancouver