There’s “quite a gap” between what’s being proposed on the Queens Avenue United Church site and what the city is willing to consider.
Jul 9, 2021 4:30 PM By: Theresa McManus 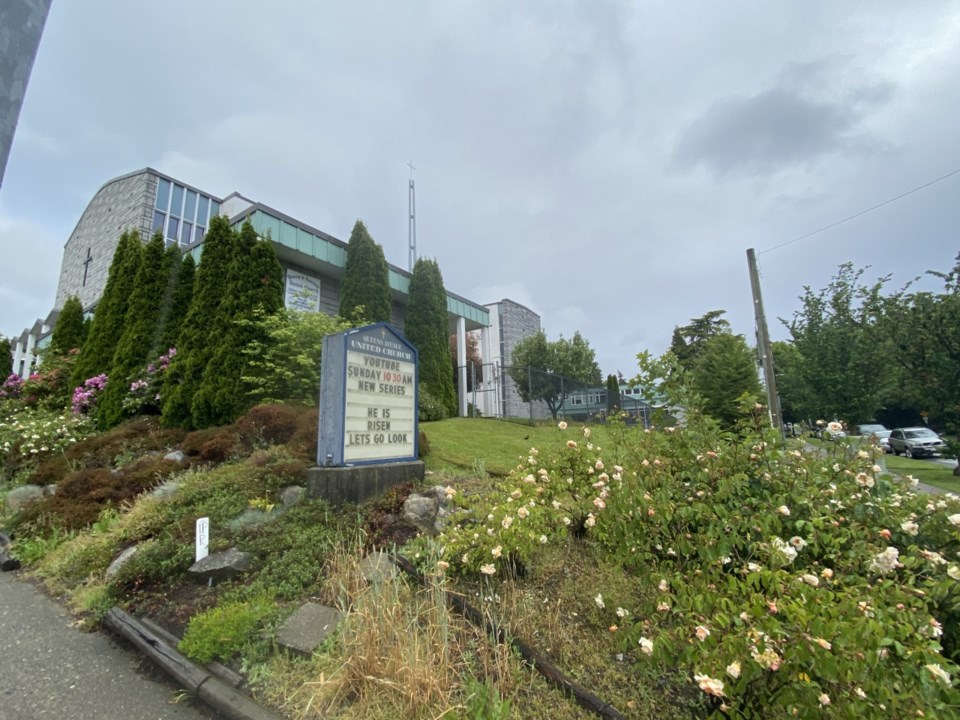 A 12-storey mixed-use building, including rental residential units, is being proposed as part of the redevelopment of Queens Avenue United Church.Theresa McManus

There’s “quite a gap” between what’s being proposed on the Queens Avenue United Church site and what the city is willing to consider.

The United Property Resource Corporation applied to the City of New Westminster for a preliminary application review for an official community plan amendment, a heritage revitalization agreement, a rezoning and a development permit for 529 Queens Ave. The applicant is proposing to build a 12-storey residential building that’s 100% rental, with 31% being below-market rentals and the remainder being market rentals.

The plan includes retention and restoration of the church’s sanctuary space, as well as space for a new non-profit childcare facility with about 79 spaces and a small-scale commercial space, such as a coffee shop.

At its June meeting, the city’s land use and planning committee received a “director’s memo” about the preliminary application review related to the proposed redevelopment. Because a 12-storey residential tower has heights “well above what is anticipated in the OCP”, staff said the proposal was presented to the LUPC in the form of a director’s memo as an “early check-in” with the committee.

Following a discussion on the proposal, the land use and planning committee supported a staff recommendation to discourage the applicant from proceeding with the current plan for this site.

The report stated the current zoning is intended to allow mixed-use development that includes pedestrian-oriented commercial businesses and two storeys of residential above. By using a heritage revitalization agreement, the city anticipates a building height for four to six storeys at this site.

Staff sought the committee’s feedback about whether staff should proceed to Stage 2 of a preliminary application review process.

Coun. Nadine Nakagawa said it’s a “really interesting proposal” and includes aspects of the city’s priorities related to child care and affordable housing. She said it’s a bit of a shame that the location of the heritage church forces any new density back toward the residential neighbourhood.

While she was willing to support the staff recommendation, Nakagawa said she has a lot of interest in pieces of this application and questioned how far the proposal is from getting staff’s support.

Emilie Adin, the city’s director of development services, said a number of items about the proposal would need to change in order to get staff’s support.

“There is, I guess, quite a gap at this point between what staff are looking for and what city policy requires and encourages, and what’s being proposed,” she said.

Athena Van Hausen, a development planner with the city, said the applicant is proposing a “significant reduction” to parking and “quite a bit more” density than what the city would normally consider at this location. She said staff has also talked to the applicant about shifting some of the massing of the building away from the Queen’s Park neighbourhood, and that’s something staff would like to see that in a proposal.

Nakagawa said she’s generally supportive of churches trying to add community amenities and to use those spaces in a way that benefits the community.

“I do think that this project is interesting enough that I don’t necessarily want to see it go away entirely. I do think that there are some pieces in there that do hold appeal,” she said. “If we can make it work, I know the neighbourhood would be sensitive to the massing going down Queens (Avenue) but if there is a way we can still have some affordable housing and still increase child care spaces, I am interested in that.”

John Stark, the city’s supervisor of community planning, said child care is a corporate strategic priority but this particular proposal may result in a reduction of child care. He said both of the current child-care operators have been told their leases will not be renewed after June 2022, which is a concern and has been raised as a concern among the 79 families currently using these two facilities.

“If there was redevelopment of this site, these two child care operations, one which is the second oldest in New Westminster, would have to be relocated,” he said. “Just in discussions with child-care operators, it will not be easy to relocate one or both of these. So, there are impacts. Depending on the density, there are no guarantees that this number of child care spaces will be replaced, and also with regards to ensuring that any replacement is non-profit.”

According to the project’s website, the two current daycares in the building would have to move by June 2022 at the earliest.

“We are working with the existing two providers to find them a new permanent home. They would have to relocate during redevelopment anyways,” he told the committee. “We are in discussions with having one return to manage all 79 spaces, as well as provide after-school programming.”

Coun. Chuck Puchmayr expressed concern that the non-market rental housing being proposed would only be secured for 20 years. Given the type of density and the parking reduction that’s being proposed, as well as the “significant impact” it could have on the neighbourhood, he said providing non-market housing for 20 years is “too small a carrot” to get his support.

Coun. Chinu Das, who chairs the land use and planning committee, said she appreciates many aspects of the proposal but feels the “tradeoff is too high” to offset the massing that is being requested for the highrise. She cited concerns about a 20-year limit on the non-market rental housing component, the potential loss of child care spaces and the impact on the adjacent neighbourhood.

“That area was designated for four to six (storeys), and they are asking for a tremendous amount of increase on that. It’s too high of a variance in my opinion,” she said. “I also find the parking variance will cause a lot of issue in that area.”

Blair said the United Church set up the United Property Resource Corporation in 2019 to support its communities of faith and redevelopment opportunities. With churches often being land rich and cash poor, he said it’s not uncommon for these sites to close and be sold to condo developers.

“We are not a commercial developer and we are not looking for your traditional returns. Our returns really are driven and remain in the community, and they are about being reinvested in the community and they are measured in financial sustainability, so that the program does not need ongoing subsidies, so that we are environmentally sustainable and socially inclusive,” he said. “Really, when we are looking at density, that is really driven by how can we achieve all of the community benefits.”

David Constable, a principal with KPMB Architects, said the proponent considered a variety of scenarios for the site and analyzed what would be necessary to support the community benefits and the client’s goals. He said a four-storey building, which is what’s envisioned in the official community plan, would allow for a building that has 50 to 60 units.

“Just to make that financially feasible, it would have to be 100% strata housing,” he told the committee. “It wouldn’t support child care on site and it wouldn’t support restoration of the sanctuary and modification of community spaces.”

Constable said a six-storey building would allow for 70 to 90 units, with two-thirds of them being strata and one-third being rental. He said a building of that size could support a non-profit child care facility, but only if 100% of the units were strata.

“This is why we have been looking at something higher,” he explained.

If the building goes up to the eight-storey level, Constable said it would then be viable to restore and retain the church facility, which does need significant work.

At 12 storeys, Constable said the project is able to accommodate a building that has 70% market rental and 30% below-market rental units, non-profit child care spaces, community spaces and improvements to the church sanctuary.

“That’s the tradeoffs that we worked through as a group to understand what was needed on this site to support those public benefits,” he told the committee.

More information about the project can be found at www.529queensave.com.