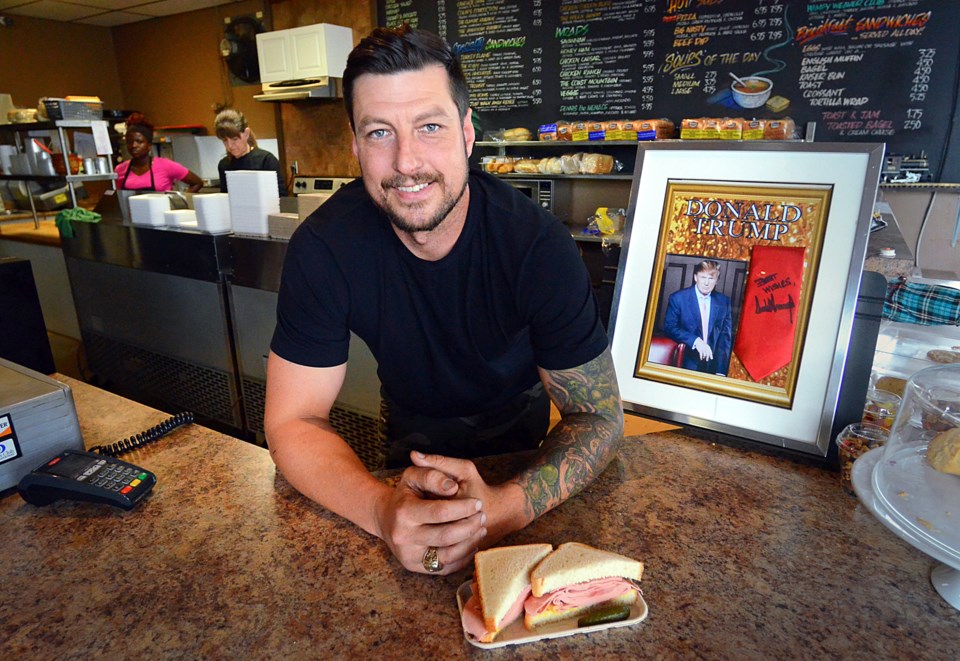 Matt Green of Greens and Beans Deli serves up a Trump sandwich, with partial proceeds going to the Immigrant Services Society. To draw attention to the fundraiser, Matt's mom Leona Green is displaying an autographed Donald Trump tie she aquired a few years back.Cornelia Naylor

Diners can get a taste of Trump at Greens and Beans Deli in Sapperton.

Leona Green is serving up a special sandwich as part of the U.S. election, with half of the proceeds of each sandwich being donated to the Immigrant Services Society of B.C.

“I have a special sandwich called the Trump,” she said. “Mine is ‘white bred’, full of baloney, Russian mustard and a small pickle. I’ am having the sandwich until the U.S. election.”

Restaurants around the globe are serving up Trump sandwiches featuring baloney. Green tweaked the recipe by replacing the Russian dressing with a spicy mustard, noting it goes well with baloney.

A few years back, Green bid on a Donald Trump tie in the Royal City Jewellers and Loans Tie Day fundraiser for the food bank. She bid $100 and was outbid by then-mayor Wayne Wright, who bid $105 – and kindly gifted the tie to Green.

“I had it displayed for years,” she said. “It was fine until the election and Trump was a candidate. People aren’t fond of him in Canada. They kept asking, ‘Why do you have that up there?’ I heard that too many times.”

After grumblings from customers, Green took down the tie, but she recently resurrected it as part of the Trump sandwich fundraiser. It will remain in place until the Nov. 8 election.

“I figure it will be worth money if he wins,” she said.

And that’s no baloney.